Remains of synagogues throughout the Galilee tell the history of the continuous Jewish presence in Israel.

Ancient synagogue in Baram
(photo credit: Joe Yudin)
Advertisement
Joe Yudin owns Touring Israel, a company that specializes in “Luxury” tours of Israel.Peace be upon this place, and upon all the places in Israel." This Inscription was found in the 19th century on the lintel of the smaller of two synagogues, now destroyed, in Baram.The Galilee holds some wonderful treasures for any traveler looking for some off the beaten path sites. One of my favorite pastimes is to make my way to the over fifty ruins of ancient synagogues in Israel's northern regions. These synagogues range in age from the first century BCE through the eighth century CE. Some of the synagogues are in the middle of overgrown fields and only accessible by hiking trail or off road vehicle. Others, albeit not many, have been incorporated into national parks that are easily accessible. The best way to see these synagogues is to check out one of the better preserved ones, like at Baram, Capernaum or Khorazin and then seek out the harder to find ones using a trail map.When I first visited the Baram synagogue, I was simply shocked. Here we have a synagogue, one of at least two that existed in the village, serving a large Jewish community maybe as early as the second century CE through the Middle Ages, and whose façade has remained intact to this day. As a young American fresh out of college, I was under the impression that the Jews were thrown out of Israel in the first century CE and never came back until the Zionist movement began in the 19th century. At least that’s what my college professors were saying. Simply put, this notion is false; and proof of a continuous, vibrant, populous Jewish presence is evident throughout Galilee from ancient times until this day. 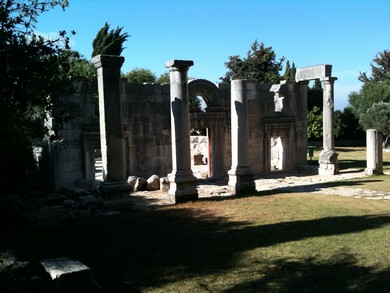 Ancient synagogue in Baram (Joe Yudin)
From Tzfat take Route 89 west towards Akko. Take this absolutely beautiful stretch of road through the mountains, pass the Arab village of Gush Halav, and about three to four kilometers later take a right onto road 889 north towards Kiryat Shemonah. Do not follow the green and white signs to Kibbutz Baram. In about two kilometers, you will see the turn off to the National Park of Baram marked with the brown and white tourists’ signs seen on so many roads. Pay the entrance fee, park in the lot and go up the stairs towards the synagogue.The ruins of this village lie just two kilometers from the Lebanese border.  Notice the ruins all around you as you walk up to the imposing facade of the pillared synagogue.  Much of the ruins are of an Arab village, built over the remains of the Jewish village, abandoned in 1948 and bulldozed by Israel in 1949. The Christian inhabitants of the town were evicted from their homes due to the Israeli military's insistence that the border area with Lebanon be secured. Most of the residents moved down the road to Gush Halav and have been fighting in the Israeli courts to get the village back. 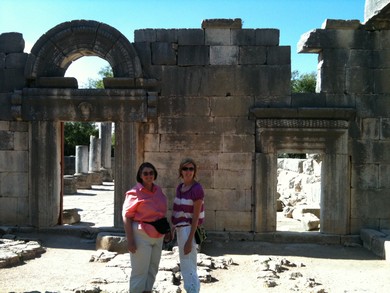 Entrance to ancient synagogue in Baram (Joe Yudin)
Jewish life has been written about in this village over the millennia, from the 3rd century at its earliest to the 13th century. In 1210 CE Rabbi Shmuel bar Shimshon wrote of the two beautiful synagogues in use in the Village of Baram in Galilee. Later in the year Rabbi Yehiel of Paris recorded his visit to the village. By 1522 however, the Italian Rabbi Moshe Basula writes of the village’s abandonment, as does Rabbi Moshe of Jerusalem in 1769. The Marionite Christians from Lebanon built their village atop the Jewish ruins on the site sometime in the 19th century. Their church is on top of the hill opposite the large synagogue.Make your way up to the synagogue. Notice the entryways and the windows over them. On the window over the right hand entrance, try to make out the engraving in Aramaic which reads "Built by Elazar son of Yuden (or Yudan)".  Incredibly beautiful carvings adorn the façade. See if you can make out wreathes, amphorae, grape bunches and even a Nike (winged goddess of victory). The Nike is the most intriguing part of this synagogue. In other Talmudic era synagogues throughout the Galilee and Golan we see other pagan engravings and mosaics such as the zodiac, Medusa and even Helios the sun god. How is it that images of Greek gods and mythological creatures adore these synagogues? We know that synagogues existed during the time of the Second Temple. However, because the Temple was still standing and the Sadducee sect probably controlled most institutions at the time, they were likely more akin to community centers and houses of study rather than more contemporary religious congregations. The Sadducees who controlled the Temple had the ear of the later Maccabean kings, King Herod and the Roman Procurators, and  believed in a strict interpretation of Torah. To them "Thou shalt not make unto thee a graven image" meant no imagery anywhere, anytime for anything.However, after the Temple in Jerusalem was destroyed by the Romans and 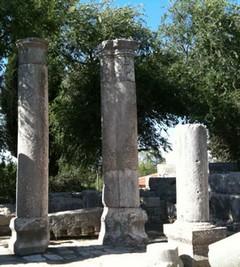 Ancient Ruins (Joe Yudin)
Jewish rebellions later saw the Jews reduced to a minority in the land, the new religious authority now completely led by the Pharisees. This religious authority believed in a more interpretive view of the Torah. In order to strike a more harmonious chord with the Hellenistic world in which they lived, they adopted some Greek and Roman art and culture. According to the Pharisees' interpretation, the following line in the Torah, "Thou shalt not bow down unto them, nor serve them," allowed that graven images were ok as long as one did not pray to them. It was during this period that synagogues evolved into the houses of prayer that we have today.Before entering the synagogue, check out the water cistern and basin used to wash hands. When entering you will see that the synagogue is laid out just as Roman temples and Byzantine churches were laid out during the same era, minus the apse. Roman temples had representations of the gods, statues in an apse; when these temples were remodeled into churches or torn down so that churches could be built over them, the idols were replaced with crucifixes. Roman temples would face east to worship the sun god, and when they became churches they too would face east as the sun became a representation of God the father. Later, Muslims—who were largely pagan before the advent of Islam—would adopt a small apse or nook to provide worshipers the direction to Mecca. Synagogues lack the apse completely and almost always face Jerusalem (as this one does) to the south. The congregants would file in and the doors would be closed for prayer time. The ark would be wheeled in front of or next to the main door and the people would pray towards the front of the synagogue: A perfect place to have a Bar or Bat Mitzvah ceremony don't you think?Joe Yudin became a licensed tour guide in 1999. He completed his Master’s degree at the University of Haifa in the Land  of Israel Studies and is currently studying toward a PhD.
Advertisement
Subscribe for our daily newsletter