Off the Beaten Track: Elijah's cave of surprises

Hiding in the shadow of Mount Carmel is a cave full of mystical stories and superstitions.

By JOE YUDIN
NOVEMBER 1, 2012 14:24
Elijah's cave
(photo credit: Courtesy)
Advertisement
Joe Yudin owns Touring Israel, a company that specializes in “Lifestyle” tours of Israel.Across Allenby Way from the Maritime Museum on the sea in Haifa lies a small, paved footpath leading through the forest, up the gentle slope of Mount Carmel to a large cave. The five minute walk up is quite interesting as a cast of characters will greet you offering you blessings, candles, trinkets and - most often - begging for a bit of pocket change. This isn’t just any trail leading up to a cave in any mountain, but according to Jewish tradition the path leading to a cave where the Prophet Elijah hid before his infamous battle against the priests of the evil Queen Jezebel.King Ahab married foreign women - daughters of kings - in order to secure treaties with those countries. One was Jezebel, daughter of King Etbaal of Sidon. Ahab built temples to the Phoenician god Baal, erecting idols in Israel and let Jezebel and her pagan prophets conduct sacrifices there. God was not happy to say the least and he sent Elijah to tell Ahab as such, promising a drought for many years to come before hiding in this cave. After a long period of drought in the land, Elijah, according to the local tradition, prayed here and then set out on his journey to the top of this very mountain and confronted the queen, challenging her and her priests to a dual. Elijah contended that his God would make it rain as Jezebel’s could not. After the pagan priests’ sacrifices and calls to their gods failed to make it rain, it was Elijah’s turn.At the bottom of the stairs just outside the cave stands Elijah’s Chair, used in special ceremonies outside  the cave but belonging to Elijah himself who is said to visit in spirit form when people pray for his help. Next to the chair are several places to light candles. Superstitious religious women take string into the cave, stretch it out for the width of the cave and cut them into wicks for these “blessed” candles that are later to be lit inside and beside the cave. Many families come here after a celebration such as a Bar Mitzvah, Brit Mila or discharge from military service to light the candles and ask for a blessing.  Prayer services are held inside the cave and a feast usually follows outside. Another “Elijah’s Chair” is found on the inside of the cave and is used for ceremonies inside the cave. 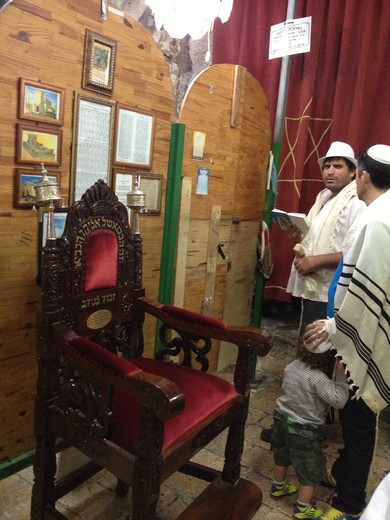 ElijahThere are several local legends about this cave. Apparently it’s famous for curing the mentally ill and for women who want to have a son. According to a Jewish pilgrim in 1742 the small cavern on the women’s side of the cave is where Elijah is said to have sat. The same traveler also claimed that the small water cistern at the fore of the cave will fill up with water if one prays for it.In the mid-nineteenth century it’s said that a thirteen year old girl of virtue was seized upon by holy spirits. Her family bound her arms and legs and shut her inside the cave for three days. She swore that the prophets Elijah and Elisha visited her during her fits telling her to immerse herself in the waters of the Sea of Galilee, which she did, freeing her of the evil spirits.Another legend claims that Jesus of Nazareth once entered the cave and recited the name of God which isn’t supposed to be spoken aloud. The cave immediately was shut tight, trapping Jesus inside. Rabbi Judah the Gardener came quickly to the cave and said “Cave, Cave, open thyself, because I am the messenger of the Living God!” The cave opened up and Jesus was able to exit and preach on Mount Carmel.Joe Yudin became a licensed tour guide in 1999. He completed his Master’s degree at the University of Haifa in the Land  of Israel Studies and is currently studying toward a PhD.Follow @JPost_Lifestyle