Driving along the coastal highway is a more interesting ride then you might think.

By JOE YUDIN
Tel Yokneam 370
(photo credit: Joe Yudin)
Advertisement
Joe Yudin owns Touring Israel, a company that specializes in “Lifestyle” tours of Israel.  Between Tel Aviv and Netanya the view of the Mediterranean Sea is mostly blocked by high-rises both old and new. Cranes and building projects dot both sides of the landscape, which attests to Israel’s still booming economy. After passing Netanya, the urban landscape begins to change and cities give way to kibbutzim, moshavim and villages. The beautiful golden beaches start to reveal themselves from the highway and the sea sparkles as joggers, sunbathers and kite surfers dot the northern stretch of quiet, pristine coastline. Fish ponds, greenhouses and vineyards dot the landscape and one can finally claim to be in “the country.”At the town limits of Hadera looms the Orot Rabin Power Station. Heading north from here, one can take Route 65 east through Wadi Ara to the Jezreel Valley or continue up the coast, later taking Route 70 through Wadi Milik. Both roads are ancient links to the oldest roadway system in the world that linked ancient Mesopotamia, Egypt and the Mediterranean port cities of the Levant. Whoever controlled these routes controlled a large part of the trade between Europe, Africa and Asia and could easily move their armies between the continents.A wadi is a seasonal river bed; flash floods and thousands of years of flowing water have cut through the hills and mountains causing the natural “roadways”. Wadi Milik is probably the ancient Semitic name for the “Valley of Salt”. Melach is salt in Hebrew. Maybe the wadi got its name from the ruins on the coast north of the turn into Wadi Milik in which lie the ancient evaporation pools of Atlit and Neve Yam. This was part of a vast factory from which salt would have been transported to Mesopotamia.  Another possible source for the name is the “King’s Valley”. 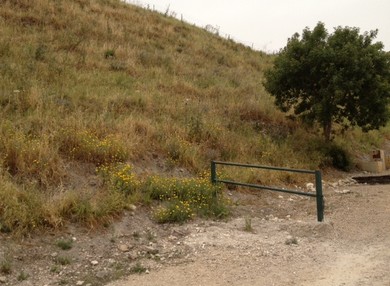 Yokneam is the Canaanite city at the wadi’s exit into the Jezreel Valley and a major ancient intersection between the ports of Haifa and Acre to the west, Beit Shean to the east, Damascus to the north, and the cities of Megiddo and Taanach controlling the roads to Jerusalem and Egypt. No traffic could get through to the Jezreel Valley without the permission of the King of Yokneam in ancient times. The first mention of Yokneam in the Bible lists all the kings and cities defeated by Joshua and his army:And these are the kings of the land whom Joshua and the children of Israel smote beyond the Jordan westward, from Baal-gad in the valley of Lebanon even unto the bare mountain, that goeth up to Seir; and Joshua gave it unto the tribes of Israel for a possession according to their divisions; in the hill-country, and in the Lowland, and in the Arabah, and in the slopes, and in the wilderness, and in the South; the Hittite, the Amorite, and the Canaanite … the king of Taanach, one; the king of Megiddo, one; the king of Kedesh, one; the king of Yokneam in Carmel… (Joshua 12). 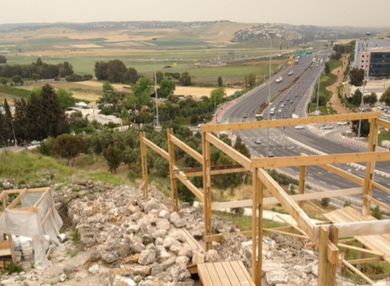 Coming out of Wadi Milik you will see the forests of Mt. Carmel to your left and the Hills of Menashe to your right before passing a new strip mall. Make a right after the strip mall and go up the hill on HaTamar Street for half a kilometer, following the brown signs to Tel Yokneam, turn left on Paamonit Street which turns into Diana Street. Park in the lot at the end and start to walk up the stairs.Tel Yokneam is in the midst of a vast restoration project by the local communities’ schoolchildren in conjunction with the Antiquities Authority and the National Parks Authority.  The colorful tiles and signs in Hebrew all over the tel are a part of those projects. You will also see a pit which explains how an excavation works, revealing the strata of different civilizations as well as a variety of maps showing the different time periods of occupation.  Your first stop will be the impressive ruins of a crusader church and its intricate water system. It’s impossible to miss. Look for the basilica. From there you have an amazing view of the mountains of the Galilee, Tabor, Carmel, Samaria and even Gilboa with the fertile Jezereel Valley between them.The Samaritans have an interesting legend about this tel. They believe that Shaubak, king of Persia, came here to kill Joshua to avenge his father’s death at the hands of the Israelites, amassing a coalition of Canaanite armies. Shaubak uses magic to create iron walls to enclose Joshua and his army. Suddenly a dove appeared to which Joshua sent to Nabih king of Gilead who came and freed him with a shout, then defeating the Canaanites and their allies.There are seventeen different layers of civilization at Tel Yokneam dating back to the Early Bronze Age more than 5,000 years ago. Its first mention in an ancient text is in an inscription at the Egyptian temple of Karnak dating to 1468 BCE. After Joshua defeated the Canaanite coalition of thirty-one kings the area was assigned to the tribe of Zevulun who were traders and sailors. Apparently it was given to the Levites who inhabited a section in every tribal territory (Joshua 21). Church father Eusebius identified it as “Cammun” called by Arabs “Keimon” and Crusaders Caymont”. The crusaders interpreted the name as meaning “Mountain of Cain”. This church is built over an older Byzantine agricultural estate.Up the hill at the summit, you will get to the remains of a fortress built by Governor of the Galilee Dahir al-Omar. Omar ruled the Galilee and ceded from the Ottoman Empire between 1770 and 1810. He refused to pay the Sultan taxes or to be subservient to him. Ten years after he defeated Napoleon in Acre, he unfortunately lost his own head to Turkish assassins who gave it as a gift to the Sultan. Continue on the path down the other side of the hill facing Mt. Carmel and you will get to the Israelite city gate, currently under restoration. You can only see some of the walls and fortifications.Here was found the evidence of a great fire and destruction of a late bronze age city between the thirteenth and twelfth centuries BCE, the exact time of the Israelite conquest of Canaan according to the Book of Joshua. You are looking at two different walls from two different Israelite periods, one from the tenth century BCE and one from the eighth, probably King Ahab and Jeroboam the Second respectively. The Israelite city seems to have been abandoned in the eighth century BCE probably due to the fact that the Assyrians were destroying everything in their wake at this time.Follow the circular trail back to the start point and your car. Joe Yudin became a licensed tour guide in 1999. He completed his Master’s degree at the University of Haifa in the Land  of Israel Studies and is currently studying toward a PhD.
Advertisement
Hot Opinion