Off The Beaten Track: The iris trail

Not only the land of milk and honey, Israel also boasts a wealth of hiking trails and spectacular wild flowers.

By JOE YUDIN
FEBRUARY 22, 2012 17:33
Iris
(photo credit: Thinkstock/Imagebank)
Advertisement
Joe Yudin owns Touring Israel, a company that specializes in “Lifestyle” tours of Israel.
About ten years ago, a couple in their late forties, early fifties came to Israel for the first time and toured with me.  They were both Jewish and wanted to see all the main attractions in Israel in eight days. They weren't particularly religious—in fact, they were quite secular; but they wanted to see and experience the sites associated with their Jewish heritage.  Although it's tough to see all these sites in an eight day tour, I designed a pretty typical tour of the type they'd requested.  After a couple of days we left Tel Aviv and headed north.  After touring Caesarea, we hit the road towards Haifa to check out Elijah’s Cave and the Bahai Gardens.  Approaching Mt. Carmel, one of the tourists took a look at the large forest on the mountain and stated, “I don’t believe how green and how beautiful it is!  I thought Israel was just a desert.”  I told them that Israel has many forests and mountains and that there are thousands of hiking trails that crisscross through pristine, beautiful landscapes."In fact” I stated “Israel has more marked hiking trails per square meter than any other country on earth.” Their shocked facial expressions said it all. “Do you like to hike?” I asked. 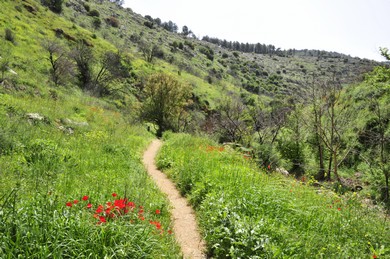 Israel hiking trails (Thinkstock/Imagebank)“We love to hike!” they responded in unison, so I pulled into the Mt. Carmel Forest Nature Reserve and we hiked to the top of the mountain through Nahal Oren to check out the view which is spectacular. The whole way they talked about how they hike every weekend, and that they loved challenging hikes in picturesque places, and that one of them was crazy about flowers.“Next time you come,” I said, "come between February and April." The wildflowers are in full bloom and you won’t recognize the country.” In the last ten years, this couple has been back six times, each time for two weeks of hiking all over the Land of Israel. One of their favorite hikes—and indeed one of the best places to hike in late February through early April—is the Iris Trail on Mt. Gilboa, where the "Gilboa Iris," whose real name is Hayne's Iris, blooms. There aren't many right now, but indeed a few Gilboa Irises have started to bloom. 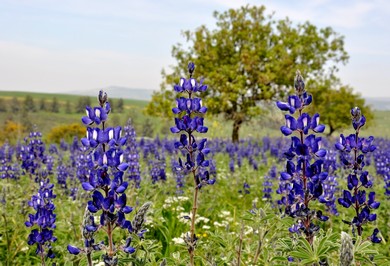 Blue Lupine *Thinkstock/imagebank)From Tel Aviv, take the Coastal Highway (route 2) north to the Afula/Caesaria exit. Take route 65 through Wadi Ara, pass Megiddo Junction and take your next right at Sargel (Tanachim) Junction on road 675. Pass Yizrael Junction and make your next right onto the Gilboa Scenic Road. At the junction, there are some wonderful restaurants with great balconies and incredible views. Try Kimel (not kosher) or Joseph’s (kosher).  A few kilometers down this country road you will pass the Herb Farm, family owned, built out of wood.  All the cattle are raised on their ranch and all the herbs grown in their garden. The views from here are particularly spectacular. Almost two kilometers after Mt. Lapid, you will come to Mt. Barkan. Here, park in the lot to your right. 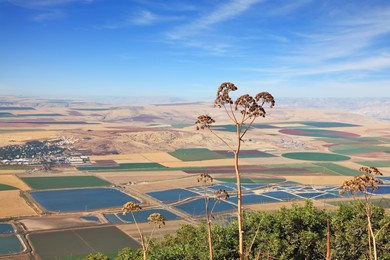 View from Mt. Gilboa (Thinkstock/Imagebank)Follow the red trail a couple hundred meters to the watchtower. Climb it carefully at your own risk. Looking southwest, over the security fence, just beyond the Palestinian city of Jenin, you may be able to make out the Dotan Valley.And he said: 'I seek my brethren. Tell me, I pray thee, where they are feeding the flock.' And the man said: 'They are departed hence; for I heard them say: Let us go to Dothan.' And Joseph went after his brethren, and found them in Dothan. And they saw him afar off, and before he came near unto them, they conspired against him to slay him. And they said one to another: 'Behold, this dreamer cometh. Come now therefore, and let us slay him, and cast him into one of the pits, and we will say: An evil beast hath devoured him; and we shall see what will become of his dreams.' And Reuben heard it, and delivered him out of their hand; and said: 'Let us not take his life (Genesis 37:16-21).’It is this valley where the Israelites began their long, hard journey to Egypt during a drought, followed by a period of affluence in Egypt that led to their enslavement and exodus. From this viewpoint, you are looking into the land of the tribe of Ephraim, one of Joseph’s sons.Go down the ladder and take the green trail heading southeast. You are on top of 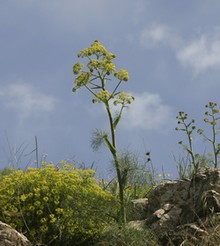 Yellow fennel (Thinkstock/imagebank) the Gilboa ridgeline and the views are spectacular. You will soon see a sign announcing that you have entered the Mt. Gilboa Iris Reserve. Please, don’t pick the flowers as they are protected! Seek out the six petal, violet-purple iris that has become rare over the years. Once you see it, you’ll know - but a good reference of wildflowers in Israel in both English and Hebrew is www.wildflowers.co.il. They also have an awesome iPhone app. Other rare flowers that you might see on the Gilboa this time of year are the red Crown Anemone, red Turban Buttercup and red Sun’s-Eye Tulip. Other flowers that you will see are the yellow Spring Groundsel, yellow White Mustard, Giant Fennel, Crown Daisy, purple Barbary Nut and Blue Lupin. Happy Hunting!
Joe Yudin became a licensed tour guide in 1999. He completed his Master’s degree at the University of Haifa in the Land of Israel Studies and is currently studying toward a PhD.