Taybeh, famous for being the only all-Christian Palestinian community, will host Oktoberfest beer-related events.

By BEATA ANDONIA, TRAVELUJAH
Taybeh Oktoberfest
(photo credit: Travelujah)
Advertisement
For further information on Christian tourism and Holy Land Tours to Israel contact Travelujah.The picturesque village of Taybeh, located 12 km northeast of Ramallah, is home to around 1,500 people, and is the only all-Christian Palestinian community in the West Bank. From its elevated spot, it overlooks the desert wilderness, the Jordan Valley, Jericho, and the Dead Sea. It's prominent reputation includes its notoriety as the only Palestinian city that has its own beer factory, Taybeh beer. And every year it rises to prominence in early October as it hosts the Holy Land's only Oktoberfest. This year it is slated for October 6 and 7, 2012.Biblical EphraimThe history of Taybeh goes back 5000 years, well before Oktoberfest. The site was first settled by Canaanites. It is mentioned in the Hebrew Bible (Joshua 18:23) as a town of Benjamin - Ophrah. However later, the place was renamed Ephraim. Jesus with his disciples visited the village after the Sanhedrin decided to execute him. Why the village is called ‘Taybeh’? 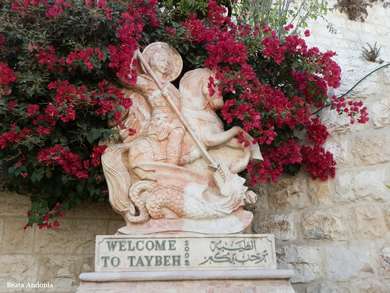 (Travelujah)In the late 12th century Islamic ruler Salaheddin entered the Holy Land. The folk story states that one day the leader was invited by the Christians of Ephraim to their village. The Muslim ruler found village’s people very hospitable and generous and called them "Taybeen" ("good and kind" in Arabic). Since that day Biblical Ephraim took the modern name "Taybeh."Four Churches in TaybehPeople of Taybeh belong to three Christian denominations: the Latin (Roman Catholic), the Greek Orthodox and as well the Melkite (Greek Catholic). Each  denomination has its own church in the village: the Roman Catholic Church, dedicated to "The Last Retreat of Jesus", was inaugurated in l971, the St. George Greek Orthodox Church was rebuilt in l929-1932 and the Melkite Church was built in l964, however the Melkite worship was founded in the village already in 1869.All the communities celebrate Christmas  according to the Western calendar, on December 25th, and Easter, according to the Eastern calendar.But there is also a fourth church in the village. 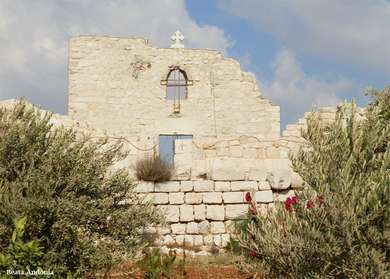 (Travelujah)Ruins of a Byzantine church known as "El Khader" (Saint George) are situated east of town.  Still standing are two chapels, an entrance portico and stairway, parts of a mosaic floor, and its well-preserved baptistery.  The church was rebuilt by the Crusaders during the 12th century. 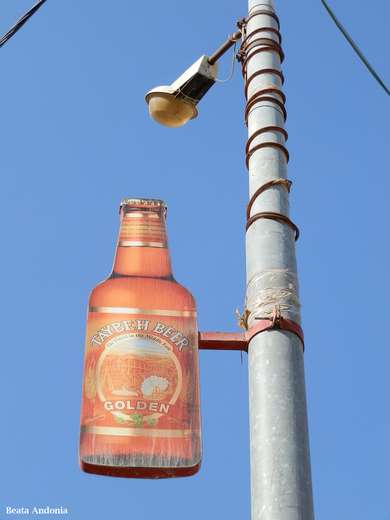 (Travelujah)Taybeh became very famous for its brewery producing the only Palestinian beer named after the village “Taybeh." The brewers produce four types of beer - Golden, Amber, Dark and Zero (non-alcoholic) and promote the drink as the “The Finest in the Middle East.”Taybeh Oktoberfest is an annual village festival organized in September/October since 2005. The event aims to promote not only the famous beer, but all the local products produced in the village.Oktoberfest 2012 will be celebrated on October 6 and October 7 and festivities will include music, dance performances and a wide selection of  local food.

Planning your visit:How to get there?If you are driving a car from Jerusalem, take Route 60 and after 20-25 km of driving you will notice a sign saying “Taybeh”, turn right and follow the signs.  For those taking public transportation, take bus 18 from the Arab Bus station next to the Damascus Gate in Jerusalem to Ramallah and then you'll need to transfer into a shared taxi (service) to Taybeh.Abraham Tours is offering a special guided Taybeh tour for NIS 150 including transportation. The company also offers its weekly Saturday tour, the Qasr El Yahud and West Bank tour , which includes Qasr El Yahud, Jericho and Taybeh and is priced at NIS 355.Green Olive Tours is providing transportation from Tel Aviv and Jerusalem.

Where to eat in Taybeh:If you plan to eat in Taybeh, and its not during  festival days, you will need to make reservations at least 24-hours in advance. Recommended restaurants are:Taybeh Zamaan Park. Tel: 0599 774 092 or (02) 289 9411Peter’s Place - www.hoshbutros.webs.com. Tel: 054 983 8349  or (02) 289 8054Travelujah tips:To learn more about Taybeh check the website of its municipality:  www.taybehmunicipality.org. Taybeh is located in the ‘Area C’ of the West Bank. Travelers should always carry their travel passports with them.