Sites and Insights: The Church of the Primacy of St. Peter

In the Holy Land, geographical connections often have spiritual implications.

By WAYNE STILES
Tabgha
(photo credit: Courtesy)
Advertisement
Wayne Stiles has never recovered from his travels in the Holy Land. Follow him on Twitter (@WayneStiles) or on his blog at www.waynestiles.com.Spring water flowed from a large pipe beside where the Jordan River empties into the Sea of Galilee. The place has a Greek name, Heptapegon, meaning “place of seven springs”; but in Arabic it is called Tabgha (pronounced “tav-guh”). The springs attract fish to this part of the sea and have for thousands of years. The church I entered, about the size of a gymnasium, is covered a number of Byzantine mosaics. Its most famous design commemorates Jesus’ multiplication of the loaves and fishes—the event from which this church gets its name, though the miracle occurred near Bethsaida (Luke 9:10). Candles flickered here and there, with unlit ones available for purchase. Outside, a narrow footpath led me to a modest structure made of old gray blocks. The 1933 Franciscan chapel had about a dozen seats facing an altar up front. The sign on the bare rock beneath the altar read “Mensa Christi,” meaning “Table of Christ.” I could hear the rhythmic waves lapping against the shoreline outside the Church of the Primacy of St. Peter.The bare rock under the altar extended under and outside the chapel wall. I walked outside and saw a rusted gate that fenced off the rock with yet another sign on top: “This is a Holy Ground.” 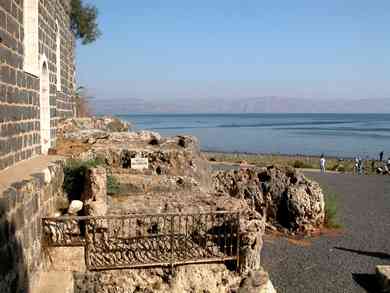 BiblePlaces.com
The shoreline had leveled pea gravel to accommodate elderly tourists. I stooped where the waves slapped the shore and withdrew a stone from the Sea of Galilee. The constant lapping had hollowed holes in the rock, and the algae greened my fingers and reminded me of the nearby springs—and why this spot has remained a mainstay for fishermen for thousands of years. 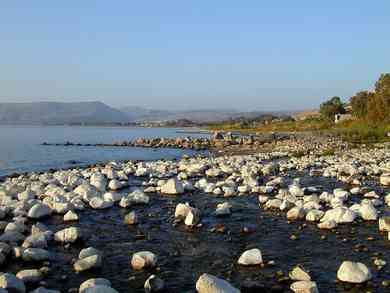 BiblePlaces.com
I saw a fisherman standing on the shore, holding his nets. More floated by in their boats. At the sight of them, I tried to imagine the scene that took place here so long ago. The New Testament records that after Jesus’ resurrection, he met Peter and some of the other apostles by the shore of the Sea of Galilee. Tradition identifies it as Tabgha. 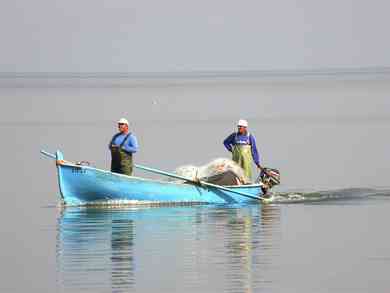 BiblePlaces.com
This is my favorite place around the Sea of Galilee. It always greets me with a sign that makes me laugh. It reads: “Holy place. No shorts.” And yet here, Peter fished half-naked. (Don’t try that today, by the way.)Having fished all night and catching nothing, the apostles saw a lone figure on the shoreline as they floated on the sea. They followed the stranger’s ridiculous suggestion to fish on the other side of the boat, and amazingly, they couldn’t haul in the miraculous catch. At the beginning of Jesus’ ministry, beside these same waters at Tabgha—near where the Church of the Primacy of St. Peter sits today—a dumbfounded Peter had fallen at Jesus’ feet after a miraculous catch of fish (Luke 5:1-8). Now, three years later, another miraculous catch had occurred. 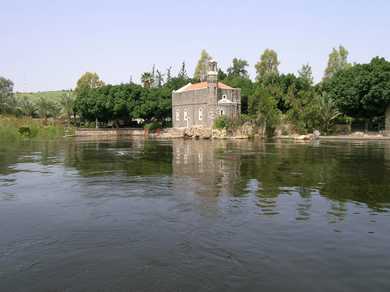 BiblePlaces.com
When the disciples reached shore with the catch in tow, they found a charcoal fire already laid, with fish cooking on the “Mensa Christi.” The only other time the Greek term for “charcoal fire” appears in the Bible occurs three chapters earlier, where we read that Peter warmed himself in Caiaphas’s courtyard in Jerusalem—and, out of fear, denied ever knowing Jesus (John 18:18; 21:9). Now, Peter sat in an awkward déjà vu.After breakfast, Jesus called Peter by the same name as when they had first met and asked. “Simon, son of John, do you love Me?” (John 21:15).One of the reasons I love going to the Holy Land is because I get to see geographical connections that often have spiritual implications. Jesus took Simon Peter back to Tabgha—to the place where their relationship first began, to the place of grace, where a miraculous catch had pulled from Peter a confession: “I am a sinful man!” There Jesus reinstated Peter and reminded him of his purpose. Just because Peter had blown it didn’t mean it was the end of the line.  Instead, it was the beginning. Time to start over. 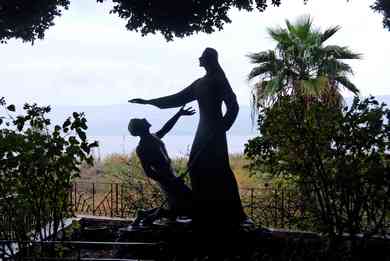 Statue of Jesus and Peter (BiblePlaces.com)
Whenever I go to the Church of the Primacy of St. Peter at Tabgha, I remember how important it is to return to the basics. Sometimes it’s helpful to start over and to realize that in spite of our failings, we still have a purpose in life. We should never quit. Tabgha reminds me of that wonderful truth. Wayne Stiles has never recovered from his travels in the Holy Land. Follow him on Twitter (@WayneStiles) or on his blog at www.waynestiles.com.This post adapted from Wayne’s book, Walking in the Footsteps of Jesus: A Journey through the Lands and Lessons of Christ (Regal Books, 2009). Used by permission. Follow @JPost_Lifestyle
Advertisement
Hot Opinion