The Israel Trail - a hiker's dream

Instead of seeing the holy land through bus windows and tour guide books, why not take a path less traveled?

By TRAVELUJAH
Hiker370
(photo credit: Thinkstock)
Advertisement
For further information on Christian tourism and Holy Land Tours to Israel contact Travelujah.Israel - arguably the world's largest small country and certainly its most diverse - is a hiker's paradise. Paths like the Bible Trail on Mount Gilboa,  the Gospel Trail or Jesus Trail in the Galilee link sites sacred to Jews and Christians while passing through breathtaking mountain landscapes. The Kinneret Trail and the Jerusalem Trail, both currently under development, will respectively encircle Israel's largest freshwater lake and the country's historic capital. Even more ambitious, the Abraham's Path links the route of patriarch of Jews and Muslims across, Turkey, Syria, the Palestinian Authority territory, Israel and Egypt.But the mother of all hiking paths is the Israel National Trail, known in Hebrew as Shvil Yisra'el, a 940-kilometer long path that begins in Dan near the Lebanese border in the north and zigzags its way across the entire country before ending in Eilaton the Red Sea.The trail, marked with its distinctive white, blue and orange stripes, takes between 30 to 70 days to finish if hiked continuously - depending on one‘s stamina and grit. Hundreds of thousands of Israelis are in the process of hiking the trail, one weekend at a time.Tourists are equally welcome to start the process. For foreign visitors the Israel National Trail offers the chance to see the real Israel - without any coach buses, guided tours or crowds, and often no cell phone reception or running water. Instead, there is a chance to discover Israel's people, history and culture on the country's less-traveled paths.Inspired by the Appalachian Trail in the United States, the Israel National Trail was inaugurated by President Ezer Weizman in 1994. It was an initiative of the Society for the Protection of Nature in Israel conceived as a way to allow Israelis to experience the entire breadth and variety of their land firsthand. Parts of the trail follow camel or goat paths, while others follow dirt roads and others no recognizable path at all. In true Israeli style of improvisation, the various sections of the trail have been added organically over the years. Thus in 2003 a portion of the trail was diverted west from the Sharon coastal plain to run along the Mediterranean where it offers beautiful beach vistas.This article details the trail in 11 sections, any one of which promises a challenging trek for hiking devotees. None of the sections traverse the Golan Heights or the West Bank.Naftali Ridge and Ramim Cliffs (Upper Galilee) On the eastern slopes of the Ramim Cliffs are a series of springs and observation points overlooking the Hula Valley - known by bird watchers as place to observe the spring and fall migrations from Europe to Africa and back. The Israel National Trail here passes through planted forests and natural undergrowth. The area ranges from a deserted sandstone quarry above Kiryat Shmona, at the height of 280 meters above sea level, southward towards the Yesha Fortress, a Taggert fort built during the British Mandate that was the site of a bloody battle during the 1948 War of Independence. In the autumn, the trail is rich with early blossoming cyclamens.Kadesh Ili stream and Yesha fortress (Upper Galilee) This challenging section passes through a limestone canyon shaded by the treetop canopy.Meron stream to EinZeved (Upper Galilee) This circular trail on the eastern slope of Mount Meron, Israel‘s tallest mountain, is blanketed during the spring with a variety of wild flowers including orchids. Towards the summer different flowers appear and color the area yellow, followed by the ripening of the raspberries as the fall approaches. 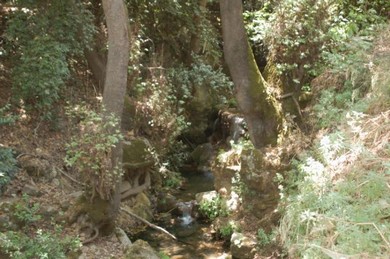 Nahal Amoud (Travelujah)
Mount Tabor (Lower Galilee) As the Bible says in the Book of Jeremiah, "As Tabor among mountains", it's impossible to ignore the presence of Mount Tabor as it looms up from all directions. The hike up Mount Tabor offers staggering views while the peak is crowned by the Church of Transfiguration and various antiquities. 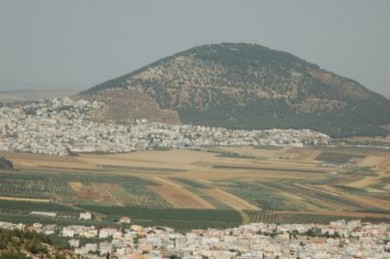 Travelujah
Tzippori stream (Lower Galilee) The trail here covers one of the geographical areas least familiar to hikers. In this area of gall oaks (known in Hebrew as Alon ha-Tavor  - Tabor oak), you can also find birch trees and carpets of blossom in winter and spring. In the Lower Galilee there are Bedouin settlements. Along the trail are streams of flowing water, improvised water pumps and a castle which is named the Monks Mill and the remains of another impressive gristmill at Khurbat Alil.Ma'apilim / Nahash stream (Mount Carmel) A walk through Nahash Stream provides an almost complete representation of Mount Carmel's hidden treasures: From the top of the trail and while walking down the ravine, you can see an impressive view of the northern Coastal Plain and the Lower Galilee. The path exits near Kibbutz Yagur. You can also see a vertical karstic hole, the "Arbutus Curve" and at the end of the trail in Yagur, a slick (secret weapons hiding place) from the pre-state Haganah underground. "Nahash" means snake in Hebrew though your chance of encountering the venomous Palestinian Black Viper are slim. Following statehood, the stream was renamed Nahal Ma'apilim after the illegal Jewish immigrants who attempted to slip ashore in defiance of the British Royal Navy's embargo on immigration. 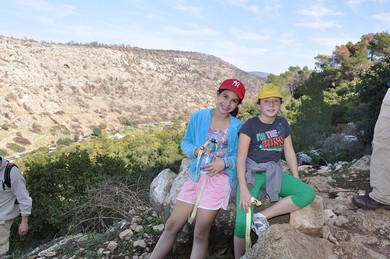 Travelujah
After this section, the Israel National Trail continues south through the Sharon plain, through the urban sprawl of Gush Dan and greater Tel Aviv, and the Shephaleh lowlands. Those who prefer trekking in pristine landscapes will want to skip this section. Shayarot Range (Judean Mountains) Trekking along the Shayarot Range provides views down to the Coastal Plain and up to the Judean Mountains, hundreds of kilometers of mountain dirt tracks, walking routes, caves, and an abundance of flowers in the spring. The trail passes through the Burma Road - a goat path widened to barely allow trucks to pass that lifted the Arab siege of beleaguered Jerusalem in 1948. Here you can climb to the military posts overlooking Route 1, today the Jerusalem-Tel Aviv expressway but six decades ago the scene of savage fighting between Arab villagers and the soldiers of the Palmach's Har'el brigade.Yatir ruins to Dragot Quarry This segment of the Israel National Trail goes from Khurbat Yatir, one of the Levite cities in the land of Judea on the eastern brim of the Yatir Mountains ridge, through the Yatir Forest, the largest forest planted by the Jewish National Fund, to the Mount Amsha nature reserve, which has impressive views and unique plants. It also contains the remains of the Roman "freeway" Ma'ale Dragot.Mamshit stream (Negev)  The trail passes through the 2,000-year-old ruins of the Nabatean city of Mamshit. Its alleys, churches, stables, houses and administrative structures, though damaged in the massive earthquake of 749, are still impressive. You can visit the ancient dams at Mamshit Stream - designed to capture every last drop of precious water in the desert, walk through the beautiful narrow canyon of the stream, and see the remains of ancient agriculture. 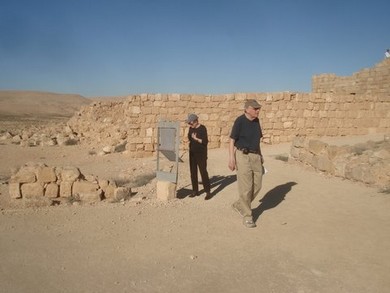 Travelujah
Mitzpe Ramon and Ramon Crater (Negev) The desert city of Mitzpe Ramon is a meeting place for artists, a station for people heading south to Eilat, and a base for visitors to the Ramon Crater - better known to geologists as a makhtesh or erosion cirque. Ibex - mountain goats with huge horns - scamper freely on the cliffs, while the crater's colors change with the passage of the sun.Kisuy stream and Uvda Valley (Negev) While the Negev is a rock desert, in the Uvda Valley you'll encounter towering sand dunes reminiscent of the Sahara. The Neolithic "leopard" temple here attests to early human occupation. Shkhoret stream (Eilat Mountains) The final section of the trail is the most geologically diverse: here you'll find Israel's only granite formations, as well as the more common limestone and dolomite. Hiking at night, one encounters a surprising array of nocturnal fauna proving the desert is hardly a lifeless wilderness. 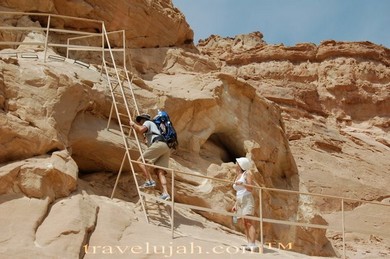 Travelujah
Reaching the port and resort of Eilat with your dusty hiking boots, you'll realize civilization isn't necessarily such a good thing. In Israel, with all its varied attractions, nature is near the top of the list.Gil Zohar writes regularly for Travelujah, the leading Christian social network focused on travel to the Holy Land. People can learn, plan and share their Holy Land tour and travel experiences on Travelujah.Follow @JPost_Lifestyle