Dalit Rosin, 30, the woman behind a successful Facebook group tells the 'Post' about an upcoming mother and baby expo.

By LOREN MINSKY | ITRAVELJERUSALEM.COM
Dalit Rosin
(photo credit: Courtesy)
Advertisement
“The inspiration for the group came to me one night at 3am when I was nursing my baby,” says Dalit Rosin, the entrepreneurial mom behind Brand New Mamas Facebook group. “I sat there thinking about sleep, or rather my lack of it, and how amazing it is that that so many women just like me were doing the same thing at that moment. I imagined how wonderful it would be to be part of a support forum or to be able to chat at any time with similar mothers in a dedicated Facebook group.”Dalit initially began by inviting her friends to join and to share topics and ideas. “I never realized then that the group would become so active with nearly 1,300 members to date (and constantly growing) and around 60 posts a day, some with up to 100 comments.”Born and raised in Essex in England, Dalit spent her gap year in Israel. The experience was more "Israeli" than Jewish, prompting her to ask questions and become more religiously active during her university years in Liverpool, where she studied Media and Cultural Studies. In her search for deeper meaning and truth, she began attending shiurim (Jewish-oriented classes) and found that she loved learning Jewish philosophy and Chassidut. She became the university’s Jewish Society Chair and worked in kiruv (outreach) organizations. In 2005 she came to study for a year at the women’s seminary Midreshet Rachel in Givat Shaul. She then returned to England for a year before making aliyah for “spiritual, religious, ideological as well as superficial purposes”. “It was always close to my heart growing up,” shares Dalit.Dalit met her South African-born husband, Chanan at Mahane Yehuda market and they have been married for three years. “He jokes with everyone that he picked me up at the shuk,” laughs Dalit. They initially lived in the neighborhood of Nachlaot and moved a few months ago to picturesque Beit Zayit, which Dalit considers “gan eden”. The couple have a beautiful two-year-old boy, Benaya. “Chanan is very supportive and encouraging of Brand New Mamas and tells everyone that I started it.”“When I think back, it was totally shocking and overwhelming being a brand new mom,” recounts Dalit. “Life changes overnight and nobody can prepare you or tell you what to expect. I wouldn't change it for the world but I’m so happy to have created a space for women to be able to share their experiences and get advice and support.” For Dalit the best part about watching the group grow is the feeling that she has made a difference to mothers’ lives. Most of the group members are olim (immigrants) far from their home, and the group provides a place for them to turn to with questions. “It’s particularly wonderful to hear of the new friendships that were made online and how many virtual interactions have turned into real life meetings,” says Dalit.Dalit admits that being the group administrator can be challenging at times, for example when it comes to keeping the peace when comments are misread and women get insulted. “It isn't supposed to be a place where women feel judged, so there have been times I have found it necessary to delete posts that seem off-topic or cause upheaval.”Dalit unwinds by spending time with friends, going to live music gigs, going out into the center of Jerusalem, attending shiurim and relaxing at home. She jokes that Chanan considers her a Facebook addict, but feels that it’s very useful in today’s “now” culture.Dalit has been very busy the past few months organizing the first ever Brand New Mamas Expo, which is due to take place next week at Ginot Hair community center in the German Colony. Organized by Dalit and Carol Dweck Goldman, who has over 10 years’ experience in running events, the expo is about bringing moms together to have fun, be pampered, celebrate motherhood and explore what top products and services are out there for moms and babies. The idea for the expo came about a year ago when many of the group’s members asked Dalit to develop the group further and to provide a way for moms to meet in the flesh. “It has been enjoyable and also challenging to organize because we wanted it to be focused and really worthwhile,” says Dalit. The event is naturally mother-centered and will include little details that moms will appreciate, from a free supervised Gymboree to a nursing corner with pillows. There will be a DJ playing music all day and fun additions like a candy-floss machine and a raffle upon entry. There will also be workshops and seminars given by experts in the field and the presence of doulas, nutritionists, yoga instructors, midwifes and life coaches. Products on sale include teething toys, award-winning books, strollers, natural and organic products, cloth and organic diapers, pregnancy clothing, baby clothing and niche gifts. 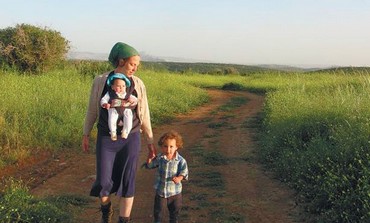 Ayala Pamela Weisfeld (Credit: Family photo)The event is in memory of Ayala Pamela Weisfeld, known by most as Pamela, an inspirational mom and wife, who tragically passed away following a five-week bout of cancer almost a year ago, leaving behind her husband and two young children. Pamela had undiagnosed breast cancer that spread to the rest of her body. She had been treated for mastitis and a pulled back muscle for months before finally discovering that it was not mastitis, and the back pain was the result of a tumor pressing on her spine. Born in New York, Pamela had lived in Israel for seven years, five of which were in Jerusalem. She was devoted to nursing her children and to attachment parenting, and went out of her way to do the absolute best she could for them. She was known to be an extraordinarily amazing woman and touched the heart of so many during her lifetime, during her struggle with cancer and even today.“Ayala Pamela was a friend of a friend and a member of the group,” shares Dalit. “Her story is so moving to all, especially being a new mom, and it seemed only right to have the expo in her memory.” The event proceeds are going to Pamela’s family.Dalit plans to make the expo a yearly event and to see what other needs exist from feedback garnered after the event. Dalit is excited just to see where life takes her.The Brand New Mamas Expo will be held Thursday April, 11 at Ginot Ha’Ir, 12 Emek Refaim street in Jerusalem. For more information please visit the event's Facebook page.

ITravelJerusalem.com is a new online international travel portal offering all the latest information on things to do, places to eat and places to stay in Jerusalem.
Follow @JPost_Lifestyle
Advertisement
Subscribe for our daily newsletter