Voices of Jerusalem: The man behind the Old City

By LOREN MINSKY / ITRAVELJERUSALEM.COM TEAM
Rabbi Moshe Weingarten in the Ohr Hachaim Synagogue
(photo credit: Courtesy)
Advertisement
“My family have the longest roots in this holy area in this holy land,” says Moshe Weingarten proudly. The Weingarten family are considered the oldest family in the Old City of Jerusalem. Moshe’s late grandfather Rabbi Avraham Mordechai Weingarten, the esteemed leader of the Jewish community in 1948, was forced to hand the keys of the Old City over to the Jordanians. The Weingarten family was the first family to return to the Old City in 1967 and his late mother Rivka was instrumental in providing an understanding of the area’s history as well as in re-establishing the Jewish Quarter.Moshe’s ancestors on the side of his grandmother, "baale batim" from the community of the Vilna Gaon, arrived in the area (first Ashkenazi Aliyah) in 1812. His grandfather’s family arrived one generation later. Though there had been an Ashkenazic community in the Old City since 1701 under Rabbi Yehuda Hachasid in the Hurva Synagogue, it collapsed when the rabbi passed away and the community became endangered due to insurmountable debt to Arab Sheikhs. “For 110 years there was no Askenazi community to be found here,” says Moshe. “From 1812, my ancestors Rabbi Shlomo Pach Rozental and his family were pioneers in growing the new community in the Old City.”Rabbi Pach Rozental purchased a building, including the Or Hachaim Synagogue, from an Islamic Waqf (administration that handled all property and real estate) for a lot of money. The building was where Rabbi Ari Hakadosh (the renowned Kabbalistic Rabbi known as the Arizal) was born in 1534. Over 200 years later, in 1742, another great kabbalist, Rabbi Chaim Ben Atar came to Jerusalem to live in the building that his “Rabbi” and mentor had once lived in. Here he established a synagogue and wrote commentary on the Bible and parts of Megillot and Talmud, which he didn’t complete due to his death in 1743. His commentary, Or Hachaim, the “light of life”, is now famous. “70 years later my family moved into the building, in the very same apartment that I own today,” says Moshe. “We have been here generation after generation ever since.” Rabbi Pach Rozental’s son, Rabbi Isaac worked as secretary to Sir Moshe Montefiore in the late 19th-century and he was instrumental in helping establish the neighborhood of Mishkenot Sha'ananim and the windmill (which belonged to Pach Rozental as private property for several years).In 1921, Moshe’s grandmother Esther Tovah from the Rozental family married Rabbi Abraham Mordechai Weingarten, who became leader of the Jews in the Old City during some very challenging years under the British mandate. Despite Arab attacks and riots in 1936 and 1939, the pre-state leadership were not amenable to Rabbi Abraham Mordechai Weingarten’s pleas to send soldiers and ammunition to protect the Jewish community, to organize transportation to and from the Old City and to establish a hospital. “It seemed that they were aiming for another heroic battle like Masada for the history books, where many Jewish lives would be sacrificed,” says Moshe. 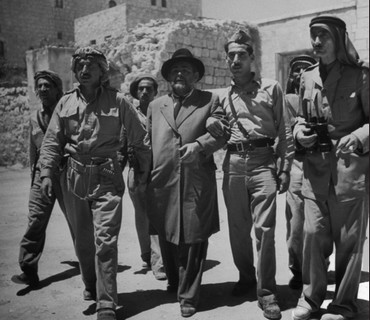 Rabbi Avraham Mordechai Weingarten
Rabbi Avraham Mordechai Weingarten when the Old City
was captured by the Jordanians in 1948“My grandfather and other leaders did not accept this, and tried to find ways to save the holy place,” says Mr Weingarten. When the Old City was eventually captured in 1948 by the Jordanians, Rabbi Abraham Mordechai Weingarten requested from the Arab commander for Jews to remain and live in the area under Jordanian rule, and although the commander initially agreed, he subsequently refused.“When I see the picture where my grandfather was led to captivity in Amman, Jordan, I see such sorrow in his face,” shares Moshe. “He knew that it was the end of an era, that after thousands of years, a moment of such tragedy had arrived where not even one Jew was allowed to stay and live in the Old City of Jerusalem. Even after the destruction of the temples, there had always been a few Jews in the area.”The Weingartens, who had been extremely affluent, were forced to leave everything behind including all their important documents and a closet with 300 items of silver. “My family left only with the clothes on their backs,” says Moshe.For 19 years the family lived in a rented home in the neighborhood of Rehavia, where Moshe was born. “My family used to gaze at pictures of the Old City and reminisce how they would celebrate every holiday in our house within the walls. We didn’t lose hope for one minute that one day we would return to the Old City, to our ancient home, to the synagogue that we care for, to our holy mission, and to being and living there.”Moshe recalls his grandfather as an impressive, outstanding, intelligent and humane man. “But he was devastated due to the fall of the Old City and as a result of his disappointment with politicians and state leaders. He lived in sorrow and mourning until his death in 1964, just three years before the liberation,” shares Moshe.  “My grandmother was very righteous, loving, caring and supportive.” A great cook, she was the benefactor and operator of a soup kitchen for the poor on a daily basis.“I remember the day of return as one of tremendous excitement,” says Moshe. “It was amazing to experience our dreaming and longing become reality.” It was less amazing for Moshe and his family to see how the area was lacking in Jewish symbols, and to see the devastation from the bombings 19 years earlier. The area was packed with Palestinian refugees, who were living in many holy places. The Weingarten Home had been looted and was neglected but thankfully was left intact. “The synagogue had been robbed of over twenty Sifrei Torah and many holy scrolls, which today would be worth around $1, 000, 000,” says Moshe. “In addition to their value in money, their value in kedusha (holiness) was priceless.” 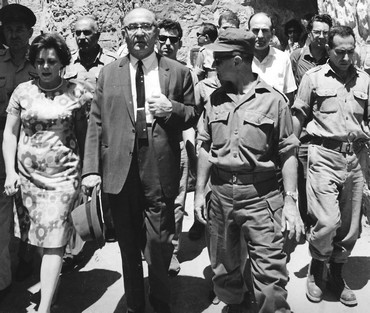 Ms. Rebecca Weingarten guides the Prime Minister Levi Eshkol
Ms. Rebecca Weingarten guides the Prime Minister Levi
Eshkol in 1967Two days later Moshe’s late mother, Rivka, a dynamic woman, was asked to guide Prime Minister Levi Eshkol around the Old City and orient him as to where things had once stood. Despite the devastation, she also got busy organizing their house and reviving the synagogue. Two Sifrei Torah (Torah scrolls) were purchased, and Or Hachaim became the first synagogue in the Old City to be active again in learning and prayer. In 1970 Rivka established a museum in the Weingarten home, with the help of Keren Yerushalayim, her friend mayor Teddy Kollek and another friend and donor, Mendel Kaplan. She gave up the family’s rights to the first floor of the building, which became known as the "Old Yishuv Court Museum" and reflected the way Jews used to live. Rivka Weingarten had a heart attack and passed away three months ago at the age of 90 in the family home where she was born and lived.Moshe has been married for 40 years, and is a father of three and grandfather of four, some of whom live in the Jewish Quarter and the rest within Jerusalem. The family is now a mix of Ashkenazi and Sephardi. Moshe’s grandchildren come to the Old City every day to study in the national religious school in the Jewish Quarter, were Moshe's oldest daughter and son studied.Moshe spent 40 years serving the Jews and the state of Israel as a high ranking police and army commander. Although he retired a few years ago, he is chairman of the family synagogue and is kept very bust preserving the family legacy. What little time he has to unwind, he uses to read books of wisdom and philosophy. “Some of my favorite books are Pirkei Avot, Proverbs, Ecclesiastes, and of course “Or Hachaim”. I am a swimming enthusiast and proudly once saved a teenager from drowning.”“My favorite part of the Old City, besides the remnant of our Temple, the Western Wall is the family’s Or Hachaim Synagogue, which I support financially and spend my time learning and praying.”Moshe sees it as his "mission" to help keep the Jewish Quarter as neat and well maintained as possible. There are still challenges to overcome, such as improving parking facilities. This is part of his broader aim to make the Old City a model in the eyes of the world for peace and coexistence among all peoples and races. “The Old City should be a spiritual center for tourists around the world where they can learn and see presentations (for free) in all languages about the history and values of Judaism, and thus we can be a "light unto the nations'."“What would I be in another life? I am grateful that I am among the Jewish people who grew up on the spiritual heritage of the Torah and Jewish values. I am so connected and captured to this place and my mission. I would choose this over any other life.”Moshe’s plans for the future include publishing a book on his grandfather (written by his mother), opening another Yeshiva in the family synagogue, and writing a book about his mother. “I am just a link in a long chain,” he humbly declares.ITravelJerusalem.com is a new online international travel portal offering all the latest information on things to do, places to eat and places to stay in Jerusalem
Advertisement
Subscribe for our daily newsletter