Off the Beaten Track: Walk through an old-new land, Part 2

By JOE YUDIN
AUGUST 11, 2011 16:16
Tel Aviv scene 311
(photo credit: Joe Yudin)
Advertisement
Joe Yudin owns Touring Israel, a company that specializes in “Lifestyle” tours of Israel.I admit it mom, as a boy I used to ride my bike to the train station in Ridgewood, New Jersey with friends and take the train into the city and hang out in Greenwich Village and Soho in the early 1980’s. We didn’t get into any trouble we just loved the, how can I put it, the funkiness of these out of the ordinary neighborhoods. Coming from suburbia, and walking around the artsy, colorful, gritty streets of downtown New York was intriguing and exciting. You never knew who or what you were going to run into next. That’s how I feel about some neighborhoods in Tel Aviv, however, like New York of the late 1980’s, early 90’s Tel Aviv of the new millennium is quickly being gentrified in all of its neighborhoods. This of course has its pluses and minuses.Many tourists avoid Tel Aviv, or stay there just one night either on arrival or departure from their stay here touring Israel. Those who do stay in Tel Aviv usually don’t take a tour guide as they believe that the city doesn’t provide any significant history as Tel Aviv is a modern city. Most tourists go to the beach, eat at a restaurant recommended by their hotel concierge and might go to one or two museums. Plenty of tourists have told me that “You’ve seen one major city, you’ve seen them all.” This really isn’t the case. There is much to see in Tel Aviv which is in my opinion one of the most unique places on earth, where East meets West in every aspect of being. 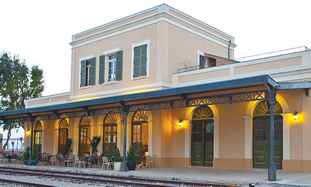 Photo: Joe YudinTel Aviv is a very safe city. You can walk or bike almost anywhere in Tel Aviv without fear of wandering into a “bad neighborhood”.  A good place to start a tour of Tel Aviv is in Old Jaffa. From there a good hoping off spot on your way to the American Colony, Florentin, Neve Tzedek and the market places is “the Tahana” or “the Station” as it translates into English. When looking for it, use the Hebrew or Israelis will kind of stare at you blankly when saying "the Station."  This tour should be done using a map.Twenty-two original buildings, all dating back to the turn of the twentieth century have been renovated, preserved and given a new lease of life in this exquisite complex. Founded in 1892 with the permission of the Ottoman Sultan Abed el-Hamid with funds raised by Jerusalem born, Jewish nobleman Joseph Navon, the Jaffa-Jerusalem train service carried close to 200,000 people per year at its height. The buildings and rail cars now boast shops, bars, galleries and historical exhibits. It’s a fantastic way to start a tour of south Tel Aviv. Make sure to check out “Villa Wieland”, the home of German Templar Hugo Wieland built in 1900. The Templars believed that they needed to settle the Holy Land in order to help bring about the return of Jesus. There are eight Templar communities in Israel, including here in Tel Aviv-Jaffa. Have brunch on one of the rooftop eateries, stroll around the grounds before heading to the  south eastern part of the complex. Cross Eilat Road to Auerbach and proceed to the corner of Bar Hoffman.You are now in the neighborhood called the “”American Colony” which was later purchased by the Templars. It was founded in 1866 just outside the walls of Jaffa by the followers of Maine Minister George Jones Adams, also to help along the return of Jesus to the Land of Israel. They built houses of wood as they had in Maine and planted hundreds of acres of crops. Their experiment was short lived however as the Ottoman authorities and Bedouin marauders made their lives miserable. They soon abandoned their settlement. Check out some of the houses. The one at 16 Bar Hoffman Street was built by an American who worked as a tour guide and taxi driver with a horse drawn carriage. It is beautifully renovated. The American Colony seamlessly merges into the artsy neighborhood of Florentin from here. Walk to the end of Auerbach to Rabbi Mebachrach Street and turn right onto Elifelet Street. Named for David Florentin, a Greek Zionist who developed this area for working class folk in the 1920’s, Florentin was a known stomping ground of the Etzel & Lehi during the British Mandate period.
Avraham Stern himself was gunned down by the British here in his apartment on what is now 8 Stern Street. Make your way through this delightful neighborhood which was flooded by Tel Aviv’s youth in the late 90’s early 2000’s as rent soared throughout the city. As rent continues to rise, Florentin is now becoming gentrified and the young 20 something generation is now being pushed out of Tel Aviv altogether. This is one of the sparks of the so called “Social Justice” revolution. Make sure to make your way east to Florentin Street and if you would like to spend more time here, check out the shops, eateries and pubs on Vital, Wolfson, Kfar Giladi streets and of course the Levinsky Market on Levinsky Street. Make your way back to Eilat Road and where Eilat meets Abarvanel, cross over Eilat to Chelouche Street and onto a small bridge. You are now in Neve Tzedek.This bridge was built by the Ottoman rulers of Palestine in the 1890’s in order to safely get wealthy Jewish businessman and Jaffa resident, Aharon Chelouche, over this wadi where the railroad ran and over to his factory built just outside of Jaffa. Later, Chelouche would build his house next to the factory. Continue down the road until you are opposite house number 32, this is his house and the beginning of Neve Tzedek. Notice the faded sign “Fabrique Chelouche Freres” in French and Arabic to the right of his home. Continue to the corner of Rokah Street at number 2. Nobel Prize laureate, S.Y. Agnon lived in this house between 1907 and 1912. Agnon wrote about the difficulties of traditional Jewish values in a modern world. What better place to do that than in the first Jewish suburb of Jaffa which would be the springboard to Herzel’s vision: the modern Hebrew city of Tel Aviv.Joe Yudin became a licensed tour guide in 1999. He completed his Master’s degree at the University of Haifa in the Land of Israel Studies and is currently studying toward a PhD.
Advertisement
Subscribe for our daily newsletter