Despite the varying perspectives of the country, both groups seemed to conclude that a visit to Israel can be fun, fulfilling and surprising on many levels.

Celebrities in Israel 311
(photo credit: courtesy/travelujah)
Advertisement
For further information on Christian tourism and Holy Land Tours to Israel contact Travelujah.A news conference on Monday illustrated – perhaps unintentionally – that there is something for everyone in Israel: In the same room a contingent of Hollywood celebrities spoke to the media about their experiences in the Holy Land while evangelical pastors from the United States answered questions about their own tour here.Both groups were in Israel on vastly different tailor-made tours, but as guests of America's Voices in Israel, an organization that aims to bolster Israel’s image in the United States.While the celebrities were experiencing night life, floating in the Dead Sea and enjoying raucous jeep rides in the Golan, the pastors were meeting with government officials and spiritual leaders in the country. 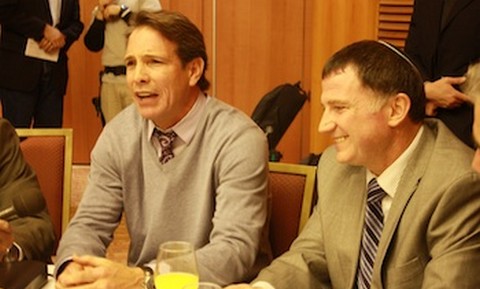 But despite the varying perspectives of the country, the conclusion of both groups seemed to be the same: A visit to Israel can be fun, fulfilling and surprising on many levels.“For me it's pretty incredible – Israel is a leading country in high tech and yet also is unparalleled for its history,” said Greg Grunberg, co-star of TV hits such as Heroes, Alias, Felicity and The Jake Effect and 26 films. “Just to see the two worlds together was amazing.”Grunberg, who was raised Jewish, was on his first trip to Israel and wants to return with his three sons.“I was moved by how all these religions coexist in Israel,” he continued. “You think, living in America, that everyone in Israel in an orthodox Jew and yet, it's not like that.”Melrose Place co-star Shaun Sipos, who was raised Catholic, said he was touched by the openness of Israelis and how, despite being a different religion, he was included in dancing and singing at the Western Wall on the Sabbath evening. He said many people are afraid to come to Israel because of news reports and sometimes sheer ignorance. but in reality, he said, he felt safe and had an unrivaled experience.The stars, who were well received in Israel, have been tweeting about their trip on Twitter and Facebook. While most responses from their fans have been positive, they realized that the mention of “Israel” can evoke negative responses. The celebrity line up also included 24 co-star of Shameless, Lost and Taken, and Austin Nichols, co-star of One Tree Hill.Meanwhile the pastors delegation talked about spiritual experiences in the Holy Land and creating interfaith partnerships with Israeli officials.Pastor Daniel de Leon of Templo Calvario in Santa Ana, California told Travelujah that he has been and would continue exhorting his congregants that visiting Israel is an experience that would enrich their Christian walk.“When I first came here I came with a preconceived idea of what the country should be like,” he told Travelujah. “But when you are here, all of a sudden the word comes alive. When you experience a place, it really comes together.”
Pastor Gary Simons of Highpoint Church in Dallas, the largest Evangelical congregation in the US, said Israel feels like home to him.“The first time I came here I was so moved – I was walking in the footsteps of Yeshua, our Messiah,” he said. “We have a common spiritual DNA with the Jewish people. There is a sense (in being here) of being completed, fulfilled and satisfied.”De Leon and Simons were joined by Luis Rodriguez, pastor of New Life Church of God in Arizona; Eliezer Bonilla, secretary of the National Association of Hispanic Evangelical Churches; Joseph Davis, pastor of High Point Church in Arlington, TX; and Tony Calatayud, national director of Salem Radio Espanol.The goal of the trip, from America's Voices in Israel's perspective, is to allow the guests, whether pastors or celebrities, to use their respective platforms – from pulpits to social media – to share their experiences in the land and, in doing so, engender positive feelings and, ultimately, visits to Israel by their followers.Public Diplomacy and Diaspora Affairs Minister Yuli Edelstein said the idea seems to be working.“They have millions of followers and it helps us to get the word out,” he said.Nicole Jansezian writes for Travelujah, the leading Christian social network focused on connecting Christians to the Holy Land. People can learn, plan and share their Holy Land tour and travel experiences on Travelujah.
Advertisement
Subscribe for our daily newsletter