With hundreds of years of Jewish history, the Danish capital may be small but it’s still full of surprises.

By TANYA POWELL-JONES
NOVEMBER 4, 2012 13:58
Copenhagen
(photo credit: Courtesy)
Advertisement
Copenhagen is known among travelers as either the coolest city, the greenest city, the most cycle-friendly city, but not really a Jewish city. This, however, should not act as a deterrent to the avid Jewish traveler. Stretching over 400 years, Copenhagen’s Jewish past does not disappoint, and neither does the city. Home to a great synagogue, bustling streets, a charming harbor and the world’s best restaurant all you’ll need is a bicycle and you're set.As the first of the Scandinavian countries to permit Jews to settle, Denmark has had a Jewish presence since the 17th century. The population has remained relatively the same as it was pre-World War II, numbering just under 7,000. Ninety-nine percent of Denmark’s Jews reside in Copenhagen. 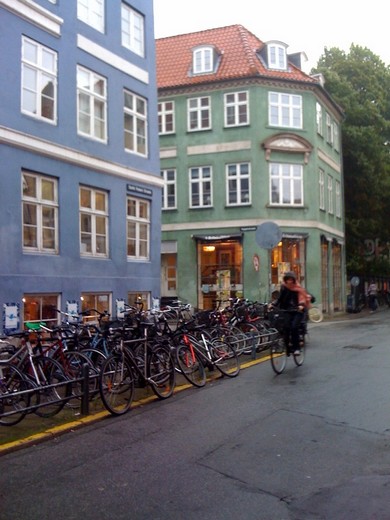 Copenhagen StreetTo start a day of sightseeing in the center of Jewish Copenhagen, begin the day at one of the most famous Jewish landmarks of the city - the Great Synagogue. Erected in 1833, this piece of mastery was designed by German-born Danish architect Gustav Friedrich Hetsch (1788-1864). Upon arrival it may not be clear what all the fuss is about but as you step inside you can’t help but be impressed  by the huge columns, carved pews and massive framing of the Ark. A closer look will reveal Egyptian elements to the columns and framing – this is one of only a handful of synagogues to use such elements for the time.The synagogue is located at Krystalgade 12 and is open for regular services. To visit outside of these hours, it’s recommended to make an appointment in advance.A short walk from the synagogue is Israels Plads, located in a large public square in central Copenhagen. The main attraction is the flea market that’s a regular fixture here. The Danes are keen collectors and the range of interesting bits and bobs available is sure to interest anybody looking for an unusual souvenir.Another good place for strolling in this area is Leather Alley. Located near the square, this street is full of shops, especially bookshops, where it’s possible to pick up rare collections, something Copenhagen is famous for. Wandering through this street it’s easy to envision the many small synagogues that once sat here in the early 20th century. 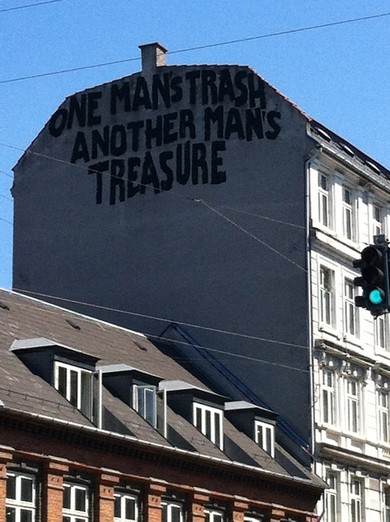 Copenhagen graffitiBefore lunch, head to The Danish Jewish Museum, opened in 2004 and designed by the world-famous architect Daniel Libeskind. The design of the building has just as much attraction as the contents. The emblem and concept of the museum is the Hebrew word Mitzvah. The floors, walls and ceiling are slanted and disorientating – adding to the overall experience, which includes videos and artifacts all telling the narrative of Jewish life in Denmark.The Danish Jewish Museum is right next to the Royal Library on Slotsholms, 1219 - a five-minute walk from Leather Alley via Christians Brygge. There is an entry fee of 50 Danish Kroner per person.Luckily, Danes love good food and you’re never more than ten minutes from a café or restaurant. On the down side none of them are kosher, except the MT Café at the Jewish Community Center, which is only open for special events or catering. However, there is a kosher shop ten minutes from the center at Lyngbyvej 83. The shop also delivers a small selection of catering upon request for hotels in the city.Full from lunch there is the oldest Jewish cemetery still to visit at Møllegade in Nørrebro. Tucked away between apartments and very narrow streets, the burial ground now only has 2,800 of the previous 5,500 gravestones. The cemetery dates back to the 17th century. This is the final resting place of people such as the Jewish Bing brothers who created the world’s first Christmas platter entitled, “Behind the frozen window panes” – a popular choice among Christians everywhere.From Krogs, the cemetery is a ten-minute car or bike ride via Andersens Blvd and Øster Søgade.Next there is The Museum of Danish Resistance, which tells the story of Denmark’s surrender to the Nazis and to the establishment of a successful resistance. Denmark’s Jewish community had been largely safe from persecution up until 1943. But as the tide turned, the Danes immediately organized a rescue operation that saw 7,200 Jews and 700 non-Jewish relatives flee to Sweden by boat. This spontaneous and successful effort eventually developed into the organized group of the Danish Resistance Movement. Sadly, during this first night the Germans seized just under 500 Jews. They were sent to Theresienstadt. Coming out of the museum and continuing to Langelinie a monument lies on the seafront dedicated to all the Jews who were deported.The Museum is on Esplanaden, in Frihedsmuseet, which is a ten-minute ride by car, or bike, via Øster Voldgade from the cemetery.For the rest of the afternoon there’s the town of Dragør to visit. This is a charming little harbor town, full of yellow houses with brightly-colored flowers spilling on to the small streets. In the harbor area there’s the Dragør Museum, and the famous fishing boat “Elisabeth K571”. Famous because this is the boat that rescued and took to safety all the Danish Jews during the Nazi occupation. The museum also has a quaint café and restaurant with specialties from the sea. Dragør also has numerous shops and fish restaurants. An afternoon should be just enough time to see everything before heading back into central Copenhagen for the evening.
Dragør is located on the south coast of the isle of Amager - just 12-14 km from the city center. Bus number 30 goes from Copenhagen’s Central Station directly to Dragør. 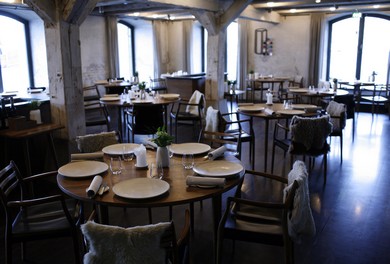 Noma restaurantWith the Danes love of food it’s no wonder that Noma, “the world’s best restaurant,” is situated here. The food has been described as inventive, groundbreaking, strange and glorious, and if you are lucky enough to have a reservation please be in touch about whether the food lives up to expectation.A second option for dinner is Café Victor on Ny Østergade 8. This upmarket restaurant will cost around 400 Danish Kroner per person.After dinner take a stroll down one of the main streets such as Strøget, here you’ll find lot of bars with outdoor seating by candlelight. But If a glass of speciality wine is what you’re looking for then head to Ved Stranden 10, the name is the location. Situated opposite the Danish Parliament this Copenhagen institution offers classic vintages from Burgundy, Champagne, Mosel, and Wachau, as well as more obscure selections - the choice is yours.The Jewish Virtual Library contributed to this report.Follow Tanya on Twitter - @TPowellJones
Or email tanyapowelljones@gmail.com
Advertisement
Subscribe for our daily newsletter