By REUTERS
Vicitms in Argentine train crash_390
(photo credit: Enrique Marcarian/Reuters)
Advertisement
BUENOS AIRES - A packed commuter train plowed into the buffers at a Buenos Aires station during Wednesday's morning rush hour, killing 49 people and injuring more than 600 in Argentina's worst rail accident in more than 30 years, officials said.Passengers told of chaos and panic as the impact of the collision propelled the second train car into the first carriage, trapping dozens of people as others looked on from the busy platforms at the central Once station.Officials said faulty brakes were suspected of causing the accident."All of a sudden we felt an explosion and we literally flew through the air... there were lots of people thrown to the floor, injured, bloodied," a passenger wearing a neckbrace who identified himself as Fabio told local television."The train (car) was encrusted inside the other ... the seats were gone, they disappeared, and people were jumping out the window," the young man said.More than 800 people were aboard the train, state news agency Telam reported. 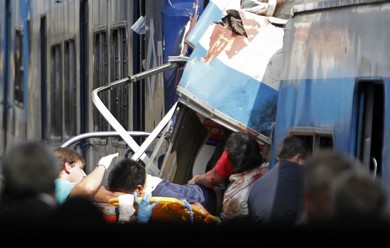 rescue workers pull victims from car
A police captain said 49 people had been killed, including one child. Most of the damage was inflicted in the first two cars of the train."The train entered the Once station at 26 kilometers per hour... we suppose there was some flaw in the brakes," Transport Secretary Juan Pablo Schiavi was quoted by Telam as saying. "This caused the train to fold up on itself."Some 10 million passengers travel every month on the Sarmiento line, which links Buenos Aires to the city's western suburbs.The country's dilapidated and overcrowded rail services, run by private companies and heavily subsidized by the state, are plagued by accidents and delays."This is the responsibility of a company that is known for insufficient maintenance and... improvisation," said Edgardo Reinoso, a train workers' trade union representative."On the other hand, there is also the lack of controls on the part of state organisms, including the National Commission for Transportation Regulation and the Transport Secretariat," Reinoso told local radio.In September, two commuter trains crashed into a city bus, killing 11 people. And one year ago, four people died during another train accident.The worst accidents in Argentine history include a 1970 crash that killed more than 230 people and another in 1978, in which about 55 died, local media said.Argentina's once-extensive rail network was largely dismantled during the privatizations of the 1990s. President Cristina Fernandez has touted projects to revive train lines connecting Argentina to neighboring Uruguay and Chile.