By REUTERS
NOVEMBER 29, 2011 12:48
Egyptians vote in elections 311
(photo credit: Reuters)
Advertisement
CAIRO - Egyptians voted for a second day on Tuesday in an election that Islamists hope will bring them closer to power even though the army generals who took over from Hosni Mubarak have yet to step aside.The parliamentary poll, the first since a popular uprising toppled Mubarak in February, has confounded fears of violence after a week of riots against army rule in which 42 people were killed.RELATED:
Analysis: Muslim Brothers victory all but assuredThe Muslim Brotherhood, banned but semi-tolerated under Mubarak, hopes its grassroots organization will help it sweep into parliament but it is not clear how much influence the assembly can wield while the generals remain in power.Monitors said turnout was high on the first day, although no official figure has yet been released. They reported logistical hiccups and campaign violations but no serious violence. 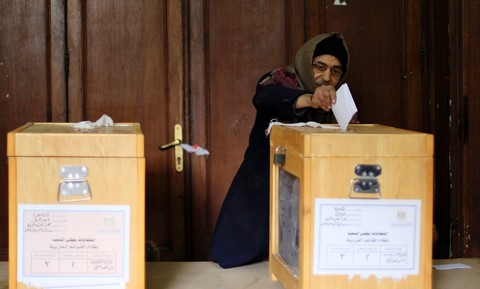 In a voting station in Cairo's Zamalek district, judges put turnout at 50 to 60 percent. Among dozens of waiting voters were some who were back after being deterred by Monday's long queues. Judges elsewhere had put it at 30 to 50 percent on Monday.Armed with laptops and leaflets, party workers of the Muslim Brotherhood's political wing and its Islamist rivals approached muddled voters to guide them through the complex balloting system and nudge them toward their candidates.

Click for special JPost coverageThe ruling army council assumed Mubarak's formidable presidential powers when it eased him from office on Feb. 11. It has promised to hand over to an elected president by July, but may seek to retain military perks and power behind the scenes.

If the staggered election process goes smoothly over the next six weeks, the new parliament will nevertheless enjoy a popular legitimacy that the generals lack. It may try to assert itself after rubber-stamping Mubarak's decisions for 30 years.Some Egyptians worry that resurgent Islamist parties may dominate political life, mold Egypt's next constitution and threaten social freedoms in what is already a deeply conservative nation of 80 million people whose 10 percent Coptic Christian minority complains of discrimination from the Muslim majority.
Advertisement
Subscribe for our daily newsletter