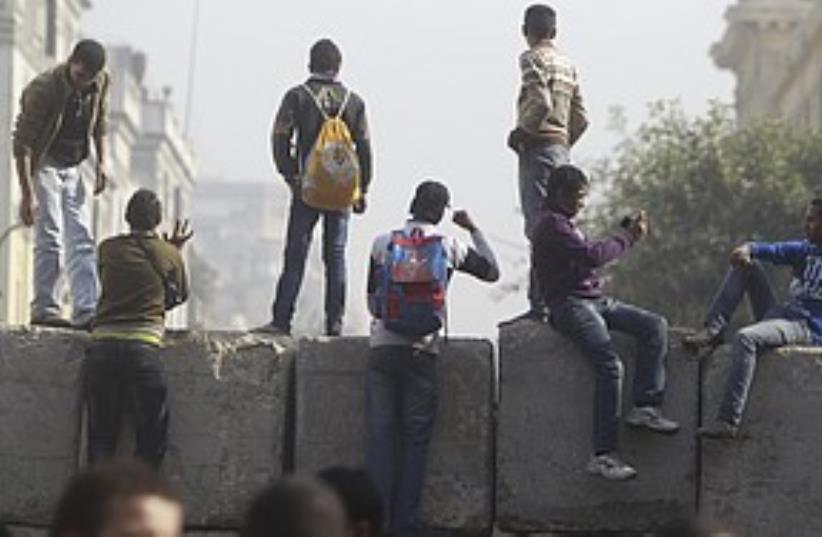 Cairo protesters 311 R
(photo credit: REUTERS/Amr Abdallah Dalsh)
Advertisement
CAIRO - Egyptian police and soldiers firing guns and teargas fought to clear protesters from Cairo's Tahrir Square on Tuesday, the fifth day of clashes that have killed 13 people and drawn a stinging rebuke from US Secretary of State Hillary Clinton.Clinton condemned as "particularly shocking" incidents such as one in which two Egyptian soldiers were filmed dragging a woman protester on the ground by her shirt, exposing her underwear, then clubbing and kicking her.RELATED:
Abbas, Mashaal scheduled to meet again in Cairo"Women are being beaten and humiliated in the same streets where they risked their lives for the revolution only a few short months ago," America's top diplomat said in a speech at Washington's Georgetown University on Monday.The United States, which saw Egypt as a staunch ally in the era of deposed leader Hosni Mubarak, gives Cairo $1.3 billion a year in military aid.Clinton said women had been mostly shut out of decision-making by Egypt's ruling military and by big political parties."Women protesters have been rounded up and subjected to horrific abuse. Journalists have been sexually assaulted. And now, women are being attacked, stripped, and beaten in the streets," she added."This systematic degradation of Egyptian women dishonours the revolution, disgraces the state and its uniform and is not worthy of a great people."Her remarks were among the strongest criticism of Egypt's new rulers by US officials. 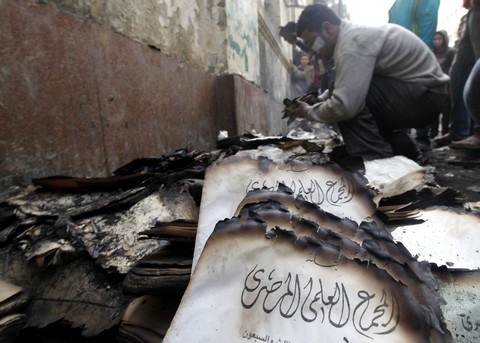 Volunteers collect burnt manuscripts, CairoGeneral Adel Emara, a member of Egypt's army council that took over after Mubarak was overthrown in February, said on Monday the attack on the woman protester was an isolated incident that was under investigation.Gunfire rings out across Tahrir SquareGunfire rang out across Tahrir Square at dawn as security forces charged hundreds of protesters attempting to hold their ground, activists and a Reuters journalist at the scene said.After a night of clashes, hundreds of protesters demanding an immediate end to army rule were in Tahrir in the morning.Medical sources say 13 people have been killed and hundreds wounded in the violence that began on Friday in Tahrir and nearby streets leading to parliament and the cabinet office.Army generals and their advisers have condemned the pro-democracy protesters, sometimes in extraordinarily harsh terms.UN Secretary-General Ban Ki-moon has criticized the use of "excessive" force by the Egyptian authorities. Rights groups said suppliers should not send small arms to Egypt.The flare-up has also marred a staggered parliamentary election that began on November 28 and ends on January 11, but the army has said a promised transition to civilian rule will go ahead.Results so far suggest the once-banned Muslim Brotherhood and hard-line Salafi Islamists will dominate the lower house.
Advertisement
Subscribe for our daily newsletter