By REUTERS
Former South African President Nelson Mandela 390
(photo credit: Reuters)
Advertisement
JOHANNESBURG - Former South African president Nelson Mandela was comfortable in a hospital on Saturday after undergoing a "diagnostic procedure" for abdominal pains, the government said, telling people not to panic about the health of the 93-year-old anti-apartheid leader.A statement from President Jacob Zuma said Mandela, who is popularly known by his clan name, Madiba, should be discharged on Sunday or Monday after being checked out for a "long-standing abdominal complaint.""Madiba is fine and fully conscious and the doctors are satisfied with his condition, which they say is consistent with his age," it said."He was in good health before admission in hospital but doctors felt the complaint needed a thorough investigation. We are happy that he is not in any danger and thank the doctors for their hard work and professionalism."Although short on medical details, the openness and speed of the government response stood in contrast to a year ago when Mandela was admitted to hospital with respiratory problems.Then, Zuma's office took hours to confirm media reports of his declining health, leading to a scrum of local and international reporters outside Johannesburg's Milpark hospital.The government has not said where Mandela is, although security has been tightened at Pretoria's "1 Military" hospital, which is officially responsible for the health of sitting and former presidents. 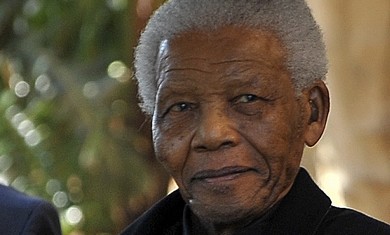 Amid earlier unconfirmed reports that Mandela was undergoing a hernia operation, a spokesman for the ruling Africa National Congress (ANC) went on television to tell South Africa's 50 million people there was nothing to worry about."There's no need for panic," ANC spokesman Keith Khoza told the e-News channel. "It was not an emergency admission. It was planned."Mandela has been in poor health since his hospitalization a year ago, and has not appeared in public since. He has spent his time at his home in Johannesburg's northern suburbs and his ancestral village of Qunu in the impoverished Eastern Cape.