By REUTERS
NOVEMBER 12, 2011 20:36
US President Barack Obama in the Rose Garden 311 (R)
(photo credit: REUTERS/Jason Reed)
Advertisement
US President Barack Obama on Saturday welcomed the Arab League's decision to suspend Syria's membership and consider economic sanctions, saying they have further isolated Syrian President Bashar Assad."These significant steps expose the increasing diplomatic isolation of a regime that has systematically violated human rights and repressed peaceful protests," Obama said in a statement released from Honolulu, where he is hosting an Asia-Pacific summit.RELATED:
Top US official: Assad’s ouster is ‘inevitable'
US: Several Arab leaders are offering haven for Assad"We will continue to work with our friends and allies to pressure the Assad regime and support the Syrian people as they pursue the dignity and transition to democracy that they deserve," he said.In the surprise move on Saturday, the Arab League called on Syria's army to stop killing civilians, turning up the heat on Assad.The League will impose economic and political sanctions on Assad's government and has appealed to member states to withdraw their ambassadors from Damascus, said Qatar's Prime Minister Sheikh Hamad bin Jassim al-Thani. It will also call a meeting of Syrian opposition parties, he said."We were criticized for taking a long time but this was out of our concern for Syria," Sheikh Hamad told reporters in Cairo. "We needed to have a majority to approve those decisions."Hopes among Western powers that Assad would be isolated by his Arab neighbors were repeatedly dashed until now.Some Arab leaders have been reluctant to turn against one of their peers given the message it might send to their own restive populations, diplomats say.But Assad has pressed ahead with the crackdown on protesters against his rule despite an Arab peace plan brokered on 2 November. The United Nations says more than 3,500 people have been killed in seven months of violence. 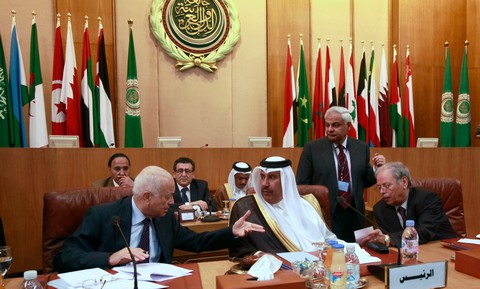 "We are calling all Syrian opposition parties to a meeting at the Arab League headquarters to agree a unified vision for the transitional period," said Sheikh Hamad, who is also Qatar's foreign minister.He said the suspension of Syria from the regional body would take effect on 16 November, but did not detail the sanctions.Qatar chairs the Cairo-based Arab League."We ask the Arab Syrian Army to not be involved in the violent actions and killing of civilians," Sheikh Hamad said, quoting from an Arab League statement.Syria's representative to the Arab League said suspending Damascus violated the organization's charter and showed it was "serving a Western and American agenda."Youssef Ahmed told Syrian state television the move to suspend Syria could only be taken by consensus at a summit meeting of Arab leaders. 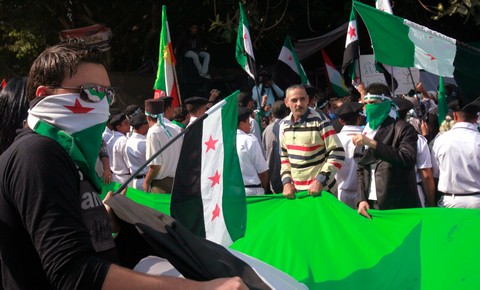 Yemen and Lebanon opposed the suspension and Iraq abstained in the vote, Sheikh Hamad said.Sheikh Hamad held out the possibility that the League may ask the United Nations to help protect the rights of Syrians."If the violence and killing doesn't stop, the Secretary General will call on international organizations dealing with human rights, including the United Nations," he said.

Since the Arab peace deal, Syrian security forces have killed more than 100 people in Homs, Human Rights Watch said on Friday, and indignation at perceived dithering by Syria's neighbors has grown.As Arab foreign ministers gathered in Cairo ahead of the announcement, some 100 protesters shouted "Bashar goes out, Syria is free" and waved flags and banners reading: "The people want international protection"."Today's Arab League meeting saw developments, but it came after a long time, after eight months of killing," said Ibrahim Alshatay, a 35-year-old Syrian activist. "We hope today's decisions will end the violence immediately and no more men, women or children will die in Syria."
Advertisement
Subscribe for our daily newsletter