Egypt military head's speech ignites crowds in Tahrir Square who chant for him to step down immediately; 3 US students arrested.

By OREN KESSLER
NOVEMBER 23, 2011 00:50
Tahrir Square as protesters chant slogans (R) 311
(photo credit: REUTERS/Amr Abdallah Dalsh)
Advertisement
The head of Egypt’s ruling military council said Tuesday it would hand over power to an elected president this summer, but defended troops’ heavy-handed crackdown against protesters rallying against the slow pace of democratic reform.“The armed forces, represented by their supreme council, do not aspire to govern and put the supreme interest of the country above all considerations,” the head of the council, Field Marshal Muhammad Hussein Tantawi, said in a rare televised address on Tuesday.RELATED:
Egyptian Islamists divided over protests
Continued violence spurs Egypt’s cabinet to quit Tantawi said the Supreme Council of the Armed Forces, or SCAF, had accepted, a day earlier, the resignation of Egypt’s entire cabinet and its replacement by an interim “national salvation government.”He said the council would be willing to relinquish power immediately if the people called for it in a national referendum.The aging general insisted the military had shown restraint in dealing with protesters.The head of the opposition Salafi party said a new president would be elected in June ahead of the expected power transfer in July. Under the previous schedule, the presidential vote would have been delayed until at least late 2012 or early 2013.“We never killed a single Egyptian, man or woman,” he said. “The Egyptian military believes it is part and parcel of the Egyptian people.”However, demonstrators in Cairo’s Tahrir Square derided the offer, chanting, “Leave, leave,” after watching the address. Tens of thousands of demonstrators filled the square Tuesday on the fifth day of mass rallies.A violent crackdown by security forces – including the widespread use of tear gas and intermittent live fire – is believed to have wounded more than 1,250 since Saturday morning and to have cost the lives of at least 36 people.Though voters in Egypt will have to wait at least half a year to choose a president, parliamentary elections in the country are scheduled for Monday.Tuesday’s clashes took an unforeseen turn when three US exchange students at the American University in Cairo were arrested and paraded on state television on suspicion of throwing Molotov cocktails.The three were shown on state TV standing against a wall with plastic soda bottles positioned on a table in front of them. University authorities said they were in contact with the US Embassy to secure the students’ release.Quoting university spokeswoman Morgan Roth, The Washington Post named the three as Gregory Porter, Luke Gates and Derrik Sweeney.The US, which gives Egypt’s military $1.3 billion a year in aid, called for an end to the “deplorable” violence and said elections there must go forward.“We are deeply concerned about the violence. The violence is deplorable. We call on all sides to exercise restraint,” White House spokesman Jay Carney said.The State Department also condemned what it called excessive use of force, saying Washington would hold Egypt’s ruling military council to its commitments.This week’s protests have recalled the 18-day demonstrations that removed longtime president Hosni Mubarak in February. Then, as now, protesters remained unsatisfied with what they saw as piecemeal gestures that did little to change Egypt’s authoritarian governmental structure.“Not enough, of course,” Shadi el-Ghazali Harb, a leader of the Revolutionary Youth Coalition, told Reuters after Tantawi’s remarks.“The military council is fully responsible for the political failure Egypt is going through now. We demand a solution that strips the military council of all its powers immediately,” he said.“We demand a full purge of the system and the removal of the military council,” said another protester.The recent violence has cast doubts over prospects that next week’s voting will be either orderly or on schedule. But Eric Trager, an Egypt analyst at the Washington Institute for Near East Policy, said the parliamentary ballot would likely be largely overshadowed by the continuing bloodshed.“The protesters at Tahrir Square seem indifferent to when the elections are held,” he said. “What they are calling for stands apart from whether the elections are held on time – it’s really about a transfer of power to civilian authority.”Protesters were furious at delays in moving past army control of the country, as well as proposed constitutional provisions that would keep the military from civilian oversight.“There were protests on Friday in which a few hundred people tried to reoccupy the square and were violently cleared. Then thousands more people came, it became a rallying cry, and thousands more came,” said Trager, a University of Pennsylvania PhD candidate whose research focuses on Egyptian opposition parties.“Violence brings more people to the square and hardens their stance. That’s why the military is going to have a very hard time finding a pathway out of this,” he said.The concessions Tantawi outlined were agreed upon in a meeting between the army and a number of political party leaders.The Muslim Brotherhood, which anticipates a strong showing in the election, was among five parties at the crisis talks, as were three presidential candidates. Others, including former IAEA chief Mohamed ElBaradei, stayed away.In Egypt’s second city of Alexandria, hundreds of protesters marched to a military base waving their shoes – a known sign of disrespect in the Arab world – in disgust at Tantawi’s speech, chanting: “Where is the transfer of power?” 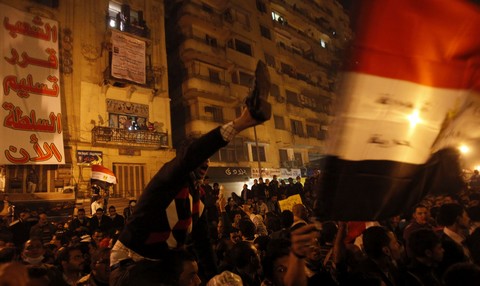 Protesters show the soles of their shoes as they chant slogans (Reuters)“Tantawi’s speech is just like Mubarak’s. It’s just to fool us,” said 27-year-old Youssef Shaaban.Political uncertainty has gripped Egypt since Mubarak’s fall, while sectarian clashes, labor unrest, gas pipeline sabotage and a gaping absence of tourists have paralyzed the economy and prompted a widespread yearning for stability.The unrest has knocked Egypt’s markets. The benchmark share index has fallen 11 percent since Thursday, hitting its lowest level since March 2009.The Egyptian pound fell to its weakest against the dollar since January 2005, and several banks in central Cairo were closed on Tuesday as a precaution against looting.

Also on Tuesday, rights group Amnesty International issued a stinging report rebuking the military council for brutality that at times exceeded that of Mubarak’s era.The study said the military had made only empty promises to improve human rights. Military courts had tried thousands of civilians, emergency law had been extended, and torture had continued in army custody, it said. Consistent reports spoke of security forces employing armed “thugs” to attack protesters.Reuters contributed to this report.
Advertisement
Subscribe for our daily newsletter