'The Help' gets Oscar boost with big SAG wins

Silent movie 'The Artist' only picks up one award from the Screen Actors Guild during star-studded ceremony.

By REUTERS
The cast of 'The Help'
(photo credit: REUTERS/Lucy Nicholson)
Advertisement
LOS ANGELES - Civil rights drama The Help got a leg up in the Oscar race on Sunday when the movie won three awards from the Screen Actors Guild, including best cast in a surprise over silent movie romance The Artist.The Help, which came into the show with four nominations, more than any other film, also earned its star Viola Davis the SAG award for best actress, while Octavia Spencer was named top supporting actress. They both played maids who face discrimination in the film set in Mississippi during the 1960s.Davis thanked another African-American actress, Cicely Tyson, who inspired her as a child and was in the audience. Davis talked of dreaming big as a child when she wanted to become an actress. She encouraged others to do so, too."Dream big and dream fierce," she said.Davis also took the opportunity to remind the celebrities in attendance, including A-listers George Clooney, Brad Pitt, Angelina Jolie and Meryl Streep, as well as TV audiences, that change is still necessary in current US culture. 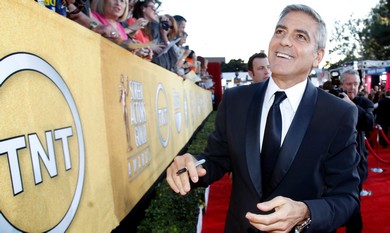 George Clooney ( REUTERS/Mario Anzuoni )
"The stain of racism and sexism is not just for people of color or women," she said. "It's all of our burden. All of us, and we can, absolutely all of us, we can inspire change."Silent movie The Artist could only claim one trophy. Jean Dujardin was named best actor in a drama for his role as a fading screen star at the end of the talkies who is ultimately saved by love.Dujardin, who beat out Clooney and Pitt in the category, seemed genuinely surprised as he held his statue and thanked SAG. Like Davis, he noted that as a kid he was always a dreamer and said his teachers called him "Jean of the moon.""I was always dreaming," he said. "I realize now that I never stopped dreaming. Thank you very much."Others winning SAG film honors included Christopher Plummer for supporting actor. Plummer, 82, who plays an elderly man who reveals his homosexuality, much to the chagrin of his family, thanked his fellow actors from the stage, calling them a wacky but wonderful bunch of artists.SAG's film awards are closely watched for their impact on Oscars because actors make up the biggest voting group at the Academy of Motion Picture Arts and Sciences which picks winners. The Academy Awards take place in Los Angeles on February 26.Coming into the SAG Awards, The Artist had been favored by pundits because it has claimed a string of victories in recent weeks at the Golden Globe and Critics Choice honors, as well as among industry groups like the producers and directors guilds.But pundits may now have to re-calculate their odds back toward The Help with its SAG wins. Another key Oscar contender, The Descendants, was shut out by SAG voters.Modern Family takes top comedy award for 2nd yearUnlike academy voters focused on film, SAG members also pick winners in TV awards, and in that arena, Boardwalk Empire was named best drama series for the second straight year and Modern Family was chosen top comedy, also for the second year running.Jessica Lange took her first SAG trophy for best dramatic actress in new show, American Horror Story, and Steve Buscemi was named best actor in a drama for critically acclaimed Boardwalk Empire. Both thanked their cast and crew members.Alec Baldwin, Betty White and the Modern Family were the three TV winners in comedy categories.The offbeat Modern Family claimed its second straight win for best TV comedy, while Baldwin was named best actor in a TV comedy for the sixth year playing a TV executive on 30 Rock, and White, who turned 90 earlier this month, took the comedy actress trophy for a second time in Hot in Cleveland. 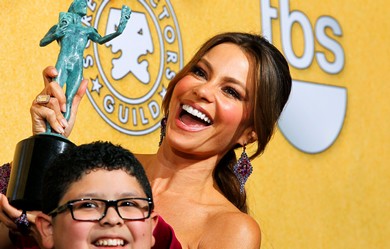 Actors Sofia Vergara and Rico Rodriguez smile with their awards for outstanding performance by an ensemble in a comedy series for
An obviously surprised White acknowledged her co-stars Valerie Bertinelli, Jane Leeves and Wendie Malick.The win "belongs with four of us," she said, then looked at her statuette with a gleam in her eye and a joke on her mind. "I'm dealing them right-in with this. I'm not going to let them keep this, but I will let them see it."In other TV awards, Kate Winslet was named best actress in a small-screen movie or miniseries for Mildred Pierce, and Paul Giamatti won the trophy for actor in a movie or mini-series with Too Big to Fail.Among the humorous moments, three women from raunchy film comedy Bridesmaids played a game in which everyone had to take a drink when director Martin Scorsese's name was mentioned. The game became a running joke throughout the show.And of the more poignant points, Mary Tyler Moore - a star on comedy The Dick Van Dyke show in the 1960s, who cemented her fame in the '70s on The Mary Tyler Moore Show and starred in critically acclaimed 1980 movie Ordinary People - was given a lifetime achievement honor."It means so much, it really does," she told Reuters about her honor backstage.Asked how she wanted to be remembered for all her accomplishments, she replied in modest fashion. "As a good chum. As somebody who was happy most of the time and took great pride in making people laugh when I was able to pull that off."Hollywood's biggest film stars including Clooney, Pitt, Jolie and others turned out on the red carpet, as did TV's top talent such as Julianna Margulies, Lea Michelle and others.As with previous Hollywood honors programs, many of the women showed off low-cut or strapless gowns. Some wore vintage or sequined dresses. Colors - violets, reds and teals - proved popular. The men wore tuxedos or stylish suits with bow ties.