By REUTERS
NOVEMBER 25, 2011 14:24
Tahrir last chance Friday Egypt_311
(photo credit: Reuters)
Advertisement
CAIRO - Tens of thousands of Egyptians demanding an end to military rule converged on Cairo's Tahrir square on Friday in what activists say will be the biggest day yet in a week of demonstrations in which 41 people have been killed.The military men who took over after people power toppled deposed president Hosni Mubarak on Feb. 11 are themselves under fire from protesters who accuse them of clinging to power, leading to street battles that look like a replay of February's unrest.RELATED:
Cairo street battles rage on through the night
Egyptian Islamists divided over protests
Egypt braces for fresh rally against military rule The ruling army council named Kamal Ganzouri, 78, who served as prime minister under Mubarak from 1996 to 1999, to head a national salvation government. Prime Minister Essam Sharaf's cabinet had resigned this week amid the protests.The United States, long a bedrock supporter of Egypt's military, called on the generals to step aside "as soon as possible" and give real power to the new cabinet "immediately."The military rulers say they are working on a transition of power, including parliamentary elections set for Monday, which could be overshadowed if violence continues. Some protesters say the army cannot be trusted to hold a clean vote.Speaking to Reuters by telephone shortly after his appointment was announced, Ganzouri declined to reveal details of his new cabinet."Everything will be outlined later," he said.After his appointment was confirmed, crowds in Tahrir chanted: "They brought a thief and appointed another thief", referring to Sharaf and Ganzouri."Say without fear: the (army) council must leave," they shouted. 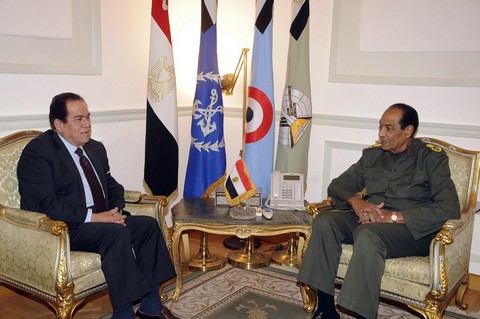 Tantawi and GanzouriActivists sought to bring a million people into the streets of Cairo on what they dubbed "the Friday of the last chance".Thousands flooded into Tahrir Square for prayers, where Sheikh Mazhar Shahin told worshipers the protest would go on until Egypt had a new salvation government.Former International Atomic Energy Agency chief and Egyptian presidential candidate Dr. Mohamed ElBaradei made an appearance at Tahrir Square as protesters were assembling for Friday's protest.He urged the ruling council to usher in quickly the democratic reforms they had promised after the fall of Mubarak. ElBaradei's appearance was his first since the start of last weeks protests, in which at least 41 have been killed according to the Egyptian Health Ministry.The presidential candidate participated in Friday prayers with demonstrators before jumping in an SUV surrounded by an "appreciative crowd," and driving off, according to a Wall Street Journal reporter in Tahrir Square.Protesters said they expected the crowd to continue to grow in the afternoon. Friday, the weekly Muslim prayer day, has traditionally been the biggest day of demonstrations in the "Arab Spring" protests sweeping the Middle East this year."We are all for the revolution and stand steadfast for the demands of the revolution. There is no conflict between us and the army," the cleric said in an address over loudspeakers.Until a truce calmed violence on Thursday, streets around Tahrir had become battle zones with stone-throwing protesters fought police firing tear gas, pellets and rubber bullets.Enthusiasm for the protests was not universal.About 5,000 people waving Egyptian flags demonstrated in favour of the military rulers in Cairo's Abbassiya district."The people want the emptying of the square," shouted the demonstrators. A big banner read: "Egypt will not be governed from Tahrir square."Activists who tried to organize a march to Tahrir from a mosque in the capital's Shubra neighborhood were rebuffed."The army council will leave in six months. We have elections in three days. What do these people want?" asked one worshipper angrily. "They are hired to start trouble."The White House stepped up pressure on Egypt's military rulers to speed up the handover to civilian control."Full transfer of power to a civilian government must take place in a just and inclusive manner that responds to the legitimate aspirations of the Egyptian people, as soon as possible," White House spokesman Jay Carney said in a statement."The United States strongly believes that the new Egyptian government must be empowered with real authority immediately."Activists set up checkpoints at entrances to Tahrir square, searching people arriving and checking identity cards."We've had enough of government controlled by the military," read a huge banner tied between two lamp posts. Several hundred young men marched around waving Egyptian flags and chanting "Down, down with military rule" and "Down, down with the field marshal", a reference to army chief Mohamed Hussein Tantawi.
Advertisement
Subscribe for our daily newsletter