David Polonsky, one of the most celebrated Israeli illustrators and directors, visited India in November as part of the initiatives to mark thirty years of full diplomatic relations between the two countries.

Best known for his adaptation of Anne Frank’s “Diary Of A Young Girl” into a graphic novel and the designs of the animated movie “Waltz with Bashir,” Polonsky’s work ranges from illustrations for newspapers, magazines, and children’s books, to stage and cinema design.

“David Polonsky is one of the top illustrators in Israel and his works are known all over the world,” said Ambassador of Israel to India Naor Gilon. “His visual language is delightful, deep and unique. We are very happy that he is visiting India. We hope this will further boost Israel – India culture ties.”

During his time in India, the artist took part in several events.

He attended the Tata Literature Live and The Mumbai LitFest in Mumbai, offering a session on the creative process of adapting the diary to comics and conducting a workshop on “Drawing from Memory - Illustrations of the everyday".

Kolkata, formerly known as Calcutta, is the capital of the Indian state of West Bengal and one of the most populous Indian cities. 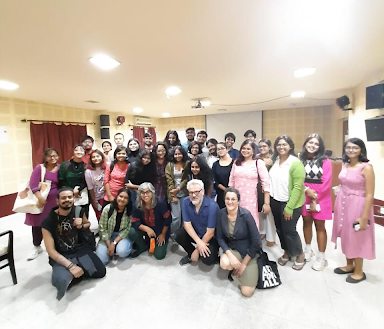 Polonsky conducted a workshop with students of the Comics Studies programme at Jadavpur University in the city. This was followed by an Artists Adda on the history of illustrations in Bengal and Israel at the Harrington Street Arts Centre. The event was attended by writers, illustrators, literature entrepreneurs, academics and culture commentators.

The adda offered an opportunity of sharing experiences, facts and anecdotes related to graphic novels, comics, long-form illustration and their impact on contemporary Bengali and Israeli society.

“This is the first visit of Polonsky to India,” said Reuma Mantzur, Cultural Attaché, Embassy of Israel in India. “He represents the long chain of creative artists from Israel, who find India as a source of inspiration.”