The controversial commentator took to Twitter to attack Asian-American and Jewish-American reporters, who published that a senior ICE adviser is a Coulter fan. 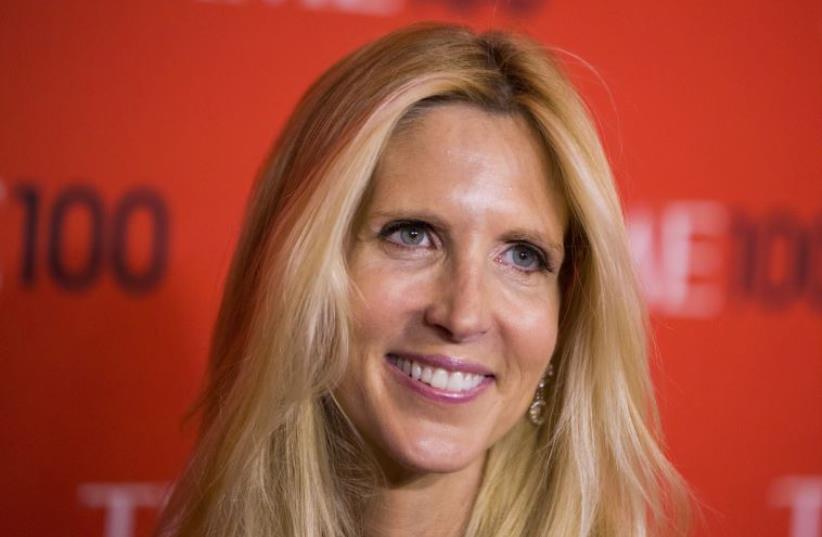 Controversial right-wing political pundit Ann Coulter
(photo credit: REUTERS)
Advertisement
Far-Right supporter and writer Ann Coulter slammed Asian-American reporter Eric Hananoki and Jewish-American reporter Matthew Gertz after a Media Matters report revealed senior US Immigration and Customs Enforcement (ICE) advisor is a fan of her work on Thursday.
Written by Hananoki, the report claims ICE advisor Jon Feere is connected to various white-supremacy groups and lauded extreme views by Coulter on social media, among them describing Muslim immigrants to the US as people who haven't "blown anything up yet" and asking "What's the upside of admitting 250,000 poor, culturally backward, non-English-speaking Muslims every year?"

.@AnnCoulter: "We want remarkable Americans, not immigrants whose selling point is: 'hasn't blown anything up yet'." https://t.co/7GQ1soXeff

The report presents various social media posts by Feere from 2015 and 2016, including a selfie of Feere holding a sign saying #bring back Ann Coulter.

— Jon Feere (@JonFeere) February 27, 2015
The media matters report could not get a comment from ICE yet asserted that Coulter is "a bigot, especially against Muslims" and that Gertz is too, if he supports her views.
In response, Coulter wrote that "just thought of a new civil right for you guys at Media Matters to celebrate: Asians & Jews who think they're black." Seeming to suggest that only blacks have a right to describe someone as racist, but not Jewish or Asian people.

Oh! I just thought of a new civil right for you guys at Media Matters to celebrate: Asians & Jews who think they're black. https://t.co/vvnuihsPaH

She went on to say "Hey black people! Eric Hananoki will tell you what's racist!"
Coulter enjoys a following of over two million people on her Twitter account and wrote 13 books on a variety of issues, from US President Donald Trump to how Liberal ideology, in her view, is bent on deconstructing traditional American values like church and family.
Coulter has described herself as an unabashed Christian and said in a 2007 interview that "the US is a Christian nation" and that she would want Jews to be "perfected" [by accepting the divinity of Jesus].