Why three Jewish women are marching on Washington

Here are three Jewish voices, in their own words, sharing why they have chosen to march on Saturday. 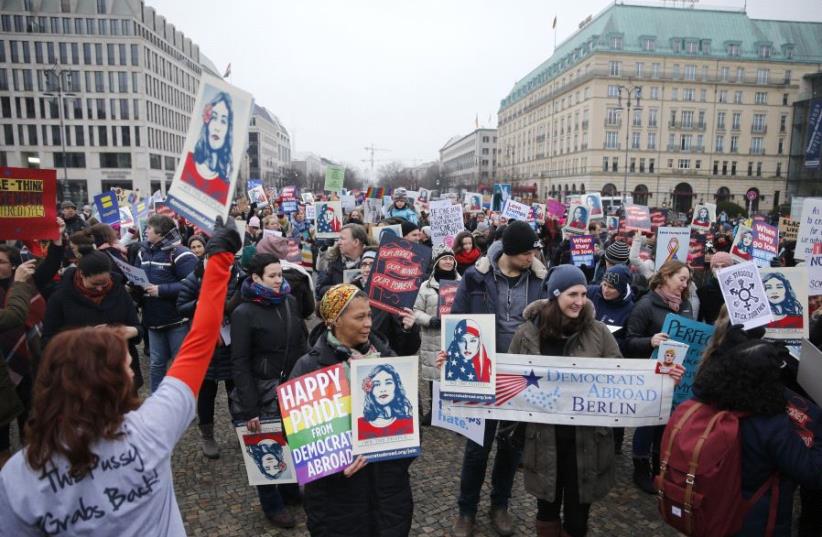 People gather in front of the US Embassy on Pariser Platz beside Brandenburg Gate in solidarity with women's march in Washington and many other marches in several countries, in Berlin, Germany, January 21, 2017.
(photo credit: REUTERS)
Advertisement
WASHINGTON -- Women are descending on Washington from all across the nation just one day after Donald Trump became their president. They intend to send the new commander-in-chief a message: Our voices and our issues will not be forgotten.Here are three Jewish voices, in their own words, sharing why they have chosen to march on Saturday.I Am Marching for the Rights of All Women and Girls“Action is not possible in isolation,” are the wise words of Hannah Arendt, the German-Jewish writer, from her book The Human Condition, published in 1958. These words resonate deeply for me as a human rights activist and a feminist Jewish woman, especially today when I joined hundreds of thousands of people, including supporters of American Jewish World Service (AJWS), to participate in the Women’s March in New York City. This march was one of more than 600 in the United States and around the world to express our collective commitment to the rights and human dignity of women and girls everywhere. With hundreds of Jewish colleagues and friends, I was proud to march behind AJWS’s banner to put the new U.S. administration and Congress on notice that we are redoubling our efforts to build a world in which women can be fully free. This is not only a universal aspiration but a profoundly Jewish one. My work as a human rights activist is guided by tikkun olam, the Jewish imperative to repair the world, and b’tzelem elohim, the Jewish belief that all people are of equal value and made in the Divine image—people like Shital, a girl in India who resisted the dangers of early marriage and is encouraging other girls to define their futures on their own terms; and people like Essy, a lesbian rights activist in Kenya, who trains police officers and clergy to respect the rights and human dignity of LGBT Kenyans who are often vulnerable to violence. Their journeys to liberation echo the themes of the Exodus Story, a defining narrative of the Jewish community and the experience of many other communities that continue to fight oppression and struggle for freedom today. Over more than a century, Jews, especially Jewish women, have created a rich legacy of leadership and participation in social movements across the diaspora and around the globe: labor movements, civil rights movements, women’s movements and LGBT rights movements—to name a few. I draw energy from these collective efforts, and from the Jewish women who have shaped them. Women like Helen Suzman, a South African activist for racial justice; Rose Zehner, a French Jewish labor leader; Alice Shalvi, a leading Israeli feminist who has advanced the status of women and girls in education; and Bella Abzug, a pioneering American feminist and former US Congresswoman. I stand on their shoulders as I continue to work for justice and fight for gender equality that we have yet to achieve. 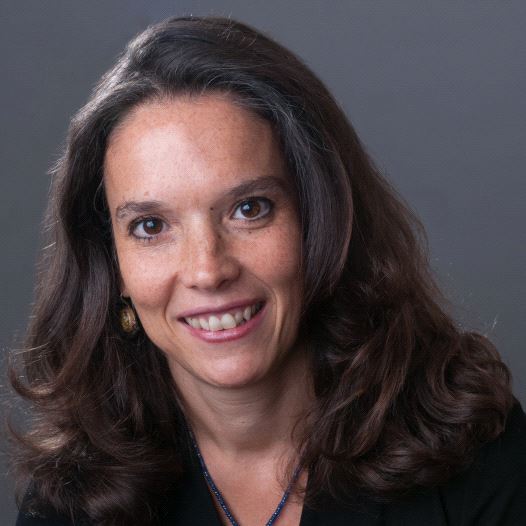 Shari Turitz (Courtesy) As a Jewish woman, I know I cannot stand idly by as women and girls are denied fundamental human rights: the right to education and equal pay, and the right to make decisions about their own bodies and lives. Throughout history, Jews of all genders have been denied these very same rights. We cannot be bystanders as communities here in the United States and around the world continue to suffer.  Every day of the year, I work with hundreds of activists in 19 countries who are advocating for women and girls to stop sexual violence, demand access to health care, enable girls to stay in school, ensure that all women have a voice in political life, and that all women have access to the land and water they depend on for survival.This work reflects everything my colleagues and I stand for. It is part of our DNA and is a core expression of our Jewish vision of justice.Under the Obama administration, the rights of women and girls were a central focus of the US foreign policy agenda. But I have good reason to know that the new US administration will reverse much of the progress women and girls have made over the past eight years.And so, in the age of Trump, the struggle for women and girls continues. There is much more work to do and more history to make. And it’s up to all of us, in the Jewish community and beyond, to do our part.

Shari Turitz is vice president for programs at the American Jewish World Service.

I Am Marching with My MotherIn 2009, I eagerly traveled to DC to attend Barack Obama’s inauguration. It was the fitting celebration for a man I believed would thoughtfully lead our country. The election signaled, to me, and as I think it did to many, a hopeful shift in racial and gender inequality—not an instant remedy but a decisive step forward. I had quit my job in the summer of 2008 to move to Columbus, Ohio to work on the campaign. Along with other staffers, I trekked miles each day to knock on doors, to turn out the early vote. In public housing projects and suburban cul-de-sacs alike, I saw the country as I never had before. Every few houses were padlocked. I was greeted with either indifference, skepticism, and more often than not, kindness and curiosity. There were voters who weren’t interested in listening and quickly shut their doors, but rarely encountered overt indignation. Fast forward 8 years, and Donald Trump as a candidate and president-elect has spewed a lethal brand of hatred which I never had faced on the campaign trail but which he has made his trademark and has been embraced by his supporters. It has given people the green light to express feelings and frustrations with the same vitriolic and violent language as he has. And with this vocabulary of hate, he has advocated for exclusionary policies, that will hurt women, immigrants, members LGBTA community, Muslims, and many more. 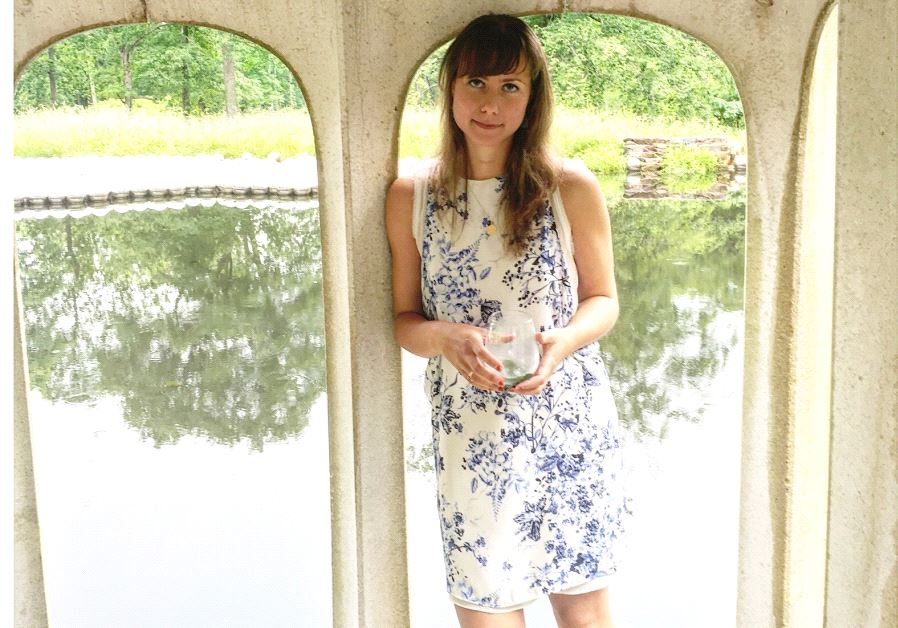 Nicole Gates (Courtesy) This ignominy spilled over to my so-called liberal bubble of Brooklyn to the neighborhood playground where I spent time as a child, when in November, pro-Trump messages and swastikas were graffitied on equipment. That was the first time I ever witnessed anti-semitism in the place I grew up. As a woman I have been made to feel unsafe by Trump. Thirty-five percent of women worldwide, according to UN Women, have been victim to sexual assault or rape, and Trump consistently uses callous, misogynistic language to disparage us and our bodies, with such “locker room talk.” And his party’s efforts to defund Planned Parenthood will deny women of their right to reproductive and health services. I turned to Planned Parenthood after college to get affordable birth control when my insurance wouldn’t cover it.  I am returning to DC eight years later, to march with my mother and cousin, because it is personal—because Trump’s administration poses a serious threat to my rights, and to the rights of friends, family, and all individuals in this country. I am going back broken-hearted but for the same reasons I flew to Ohio in 2008 because I want to feel empowered, and to stay at home afraid and defeated would accomplish nothing. I want to stand shoulder to shoulder in a moving crowd of men and women with common values and convictions, who refuse to accept Trump’s hateful rhetoric, and who firmly understand the sage words of Barack Obama’s Inaugural Address in 2009, that “our patchwork heritage is a strength, not a weakness” and that “because we have tasted the bitter swill of civil war and segregation, and emerged from that dark chapter stronger and more united...” It feels like we’ve taken many steps back, but I am hopeful that marching on Saturday will make these words ring true again soon.Nicole Gates Anderson is senior editor at Modern Magazine and The Magazine Antiques.​I Am Marching For DiversityEvery night growing up, at precisely 7:00 p.m., my family sat down to dinner. The meal was formal, but the conversation was freewheeling and lively. My parents were from Europe so we children heard about life in Germany, surviving the concentration camps, and the circuitous and sometimes dangerous trek to safety in the US We also debated the issues of the day: the 60's Revolution, the Vietnam War, the Arab-Israeli conflict. Both my parents, who were themselves children during the Nazi years, recalled the many people, often strangers they never met, whose bravery and kindness enabled them to survive. The message was clear: hold our hard-won American rights dear and use them well; share our blessings with those less fortunate; speak out for others or, as Pastor Niemoller wrote, there might be "no one left to speak for me." These are Jewish values rooted in Torah: give respect and dignity to all human beings, observe mitzvot, pursue justice, do what is right and what is good. To paraphrase Rabbi Abraham Joshua Heschel, every one of us must be aware of the monstrosity of injustice, and ask ourselves "What have I done today to alleviate the anguish, to mitigate the evil, to prevent humiliation?"  Those in positions of authority are not exempt from the commandments. To the contrary, they must use their power for the good of all people, especially the most vulnerable among us.Beatrice Kahn (Courtesy)These lessons put me on the bus to the Women's March in DC where I will join thousands of others exercising the fundamental rights all patriotic Americans cherish. I will fulfill my duty as an American to make sure government, regardless of who is at the helm, knows citizens expect policies and laws that reflect our aspirations and values. We are watching, as it is our civic duty to hold those in power accountable, a duty rooted in hard-won, precious rights. When my grandmothers were born, American women could not vote, and were arrested and tortured for demanding the right.  The cost of securing my civil rights was high, how can I squander them by neglecting my civic duty to speak out for what is right?At the Women's March, I along with thousands of others will convey the message that I learned so long ago around the dinner table— that our vibrant and diverse communities are the strength of our country. I march because it is my civic duty. And, I march for my mother and grandmothers, as well as the future of this country, a future where we live together in peace, and safety, with respect for the full human potential of every individual, free from bigotry, with access to healthcare and the right to care for our bodies as our religion and conscience dictate, to be paid fairly for our work, and to recognize that women's rights are human rights.

Beatrice Kahn​ is the incoming president of the National Council of Jewish Women.​