Eleventh hour 'drama' between Egypt and the Obama administration

Cairo had expected the anti-settlements UN Security Council resolution to be vetoed. 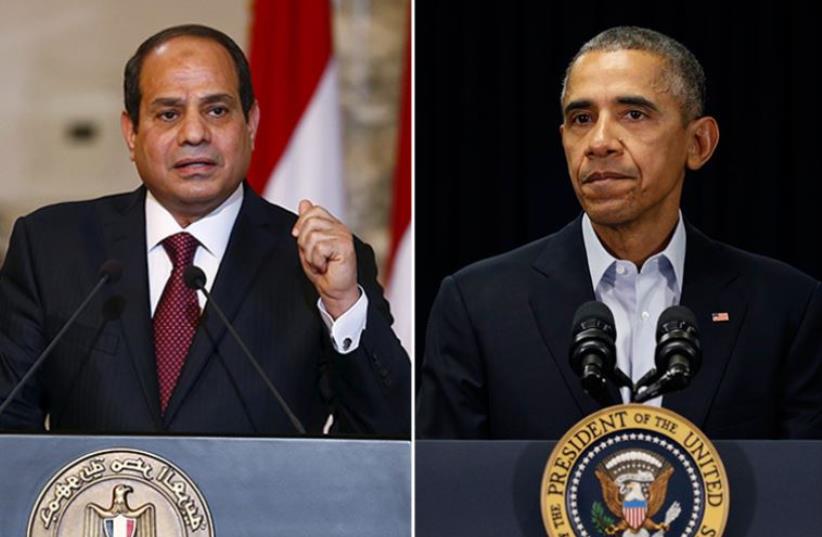 Obama and Sisi
(photo credit: REUTERS)
Advertisement
Diplomats in Cairo moved quickly on Saturday to contain the controversy over Egypt’s handling of the UN Security Council resolution on West Bank settlements and policies in Jerusalem.A statement released by Egypt’s Foreign Ministry says its top diplomat, Sameh Shoukry, initiated a call to Saeb Erekat, chief Palestinian negotiator and secretary general of the Palestine Liberation Organization’s Executive Committee, “to continue coordination and consultation in the next phase of work to push forward the peace process and resume negotiations.”Palestinian leadership was reportedly caught unaware by the extraordinary diplomatic game of musical chairs in which Cairo withdrew its own motion in order to give the incoming American administration a chance to address the core issues of the Israeli-Palestinian conflict – banking on a United States veto of the measure that failed to materialize. "Egypt did not realize that the consultations reached [by the Security Council's member states] were enough to pass the resolution,” Foreign Affairs Ministry spokesman Ahmed Abu-Zeid told Dream TV, a local Egyptian station.
UN Security Council passes resolution demanding an end to Israeli settlement building
But on background, sources close to the foreign ministry say Egyptian President Abdel Fattah al-Sisi, who sees himself as a realpolitik operator, was ready to face criticism for backing off on sponsorship of the resolution in exchange for traction on important diplomatic objectives.The resolution originally drafted by Egypt’s foreign ministry was reintroduced by New Zealand, Malaysia, Venezuela, and Senegal and ultimately its vote was cast in favor of the text composed by its own diplomats.Cairo thinks that ultimately it has racked-up credit with the incoming Trump administration [by postponing the vote at its request] while still seeing Cairo’s language on the draft resolution adopted by the international community. Following the vote, Zeid announced that, “Today, Erekat thanked Egypt for its support for the UN Security Council resolution,” adding that Cairo remained committed “to supporting the Palestinian cause and the preserving the rights of the Palestinian people.” Yet, the last minute maneuvering whereby Egypt seemingly stepped aside pursuant to an understanding with the US President-elect’s team and passing it off to New Zealand, Venezuela, Senegal and Malaysia did not come without cost. “Securing the president an early Trump invitation to visit the White House and an agreement by Netanyahu to accept the previously extended offer for a peace summit with Palestinian leader Abbas to be hosted by the Egyptian presidency were among the tangibles on the table,” said a knowledgeable observer who spoke to The Media Line under condition of anonymity. “At the moment we might look more like stooges than strategists but we are the ones who have to deal with the American and Israeli leaders who are going to be in place in 2017 and beyond.”It’s understood that Sisi’s decision not to attend the September funeral of the former Israeli president and prime minister Shimon Peres stemmed from Netanyahu’s demurer of the Egyptian summit initiative put forward in May by the Egyptian president.But a Sisi visit to Washington plus acceptance of a Cairo peace summit would demonstrate Egypt’s continued strategic relevance to the Americans and its central role as the broker in Israeli-Palestinian peace making.“The President and Mr. Trump touched on the draft resolution on Israeli settlements placed before the UN Security Council,” Sisi’s spokesman said Thursday night after the President-elect placed a call to the Egyptian leader. “They agreed on the need to allow the new US administration to deal in a comprehensive manner with all aspects of the Palestinian issue so as to achieve a comprehensive and final settlement.”Like his Israeli counterpart, Sisi has essentially already said goodbye to the outgoing American president and the fact that Egyptian diplomats had been coordinating their UN Security Council moves with Trump’s transition team clearly irritated President Obama.“As this resolution emerged from the Egyptians yesterday, we were preparing to make a decision, and then we had the drama,” said Ben Rhodes, Deputy National Security Adviser for Strategic Communications, in an on-the-record press call organized by the White House on Friday.There is speculation here that built-up tensions between Sisi and Obama may have manifested later in the day as the US State Department issued a warning to American citizens of threats from terrorist groups in Egypt and “to consider the risks of travel to the country.”American officials insist that travel warnings are not political measures and note that a similar advisory has been posted for Jordan.But the State Department’s rehashing of the year’s security incidents on the eve of the high tourist season at Luxor will inevitably prompt official anger here.“Unnecessary alerts have negative impacts, particularly on the economic front,” said the Foreign Ministry’s Ahmed Abu Zeid after the US Embassy in Cairo issued a similar advisory in October.For more stories from the Media Line, click here