Israel is tight-rope walking around another devastating conflict

A conflict on any of Israel’s borders is not in anyone’s interests.

By ANNA AHRONHEIM
FEBRUARY 18, 2018 19:27
A Hezbollah member reacts while Hezbollah leader Sayyed Hassan Nasrallah talks on a screen during a televised speech at a festival celebrating Resistance and Liberation Day in Nabatiyeh, Lebanon
(photo credit: ALI HASHISHO/REUTERS)
Advertisement
For a second week in a row, Israel has seen severe security incidents on its borders which, with one small miscalculation, could have very easily somersaulted into another devastating conflict in the region.Last week an Israeli F-16 was downed after Syrian air defenses launched some 20 missiles towards Israeli jets carrying out retaliatory strikes deep inside the war-torn country after an Iranian drone infiltrated Israeli airspace.This week, four Israeli soldiers were wounded - two seriously - after an improvised explosive device which was hidden inside a flag, planted on the Gaza-Israel border, detonated as troops examined it. Both these incidents were the most serious attacks on either front in years.In the north, it was the first overt confrontation between arch enemies Iran and Israel, which lost the first jet in a combat situation in some 30 years, while the incident in the south was the most serious incident on the Gaza front since Operation Protective Edge in 2014.The IDF is currently investigating both events, studying whether overconfidence on the part of the pilots and soldiers played a role or whether the other side took advantage of a weak spot in IDF procedures. 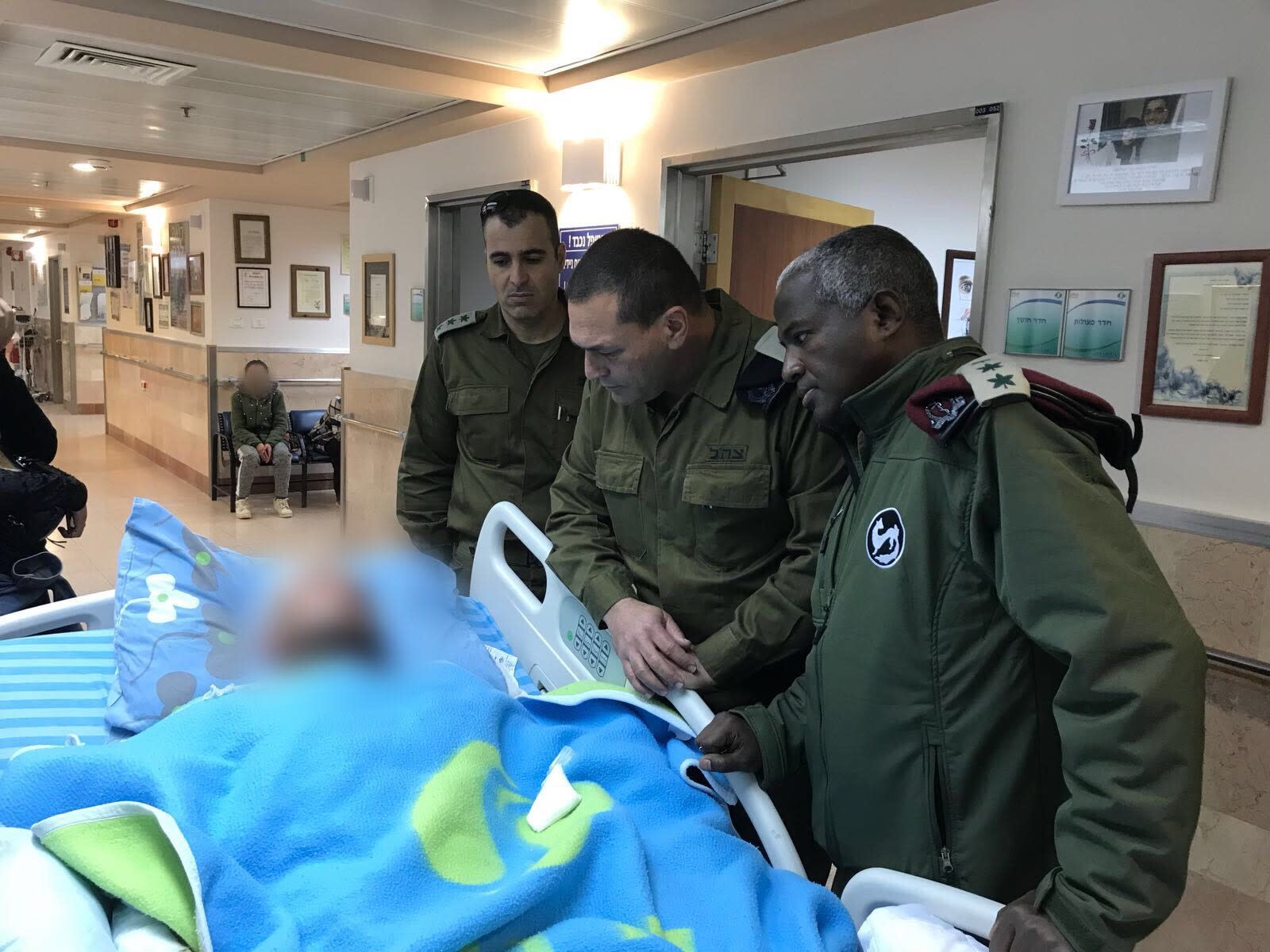 Southern Command Maj.-Gen. Eyal Zamir with one of the soldiers wounded on February 17, 2018 (IDF SPOKESPERSON'S UNIT)Both, Hamas and Iran, have hinted that the reason behind the recent escalation are Netanyahu's attempts to deflect from corruption probes, but whether that may or not be the case, Israel’s task is to prevent further escalation as it has no real strategic endgame for a war on either front.Officials from Israel’s defense establishment have made it clear numerous times that while the Jewish State is not at all interested in any sort of escalation, it will defend its citizens and security interests.However, there is a dilemma facing Israeli officials.The country has fought several wars with Hamas in recent years and it is understood that the Gaza-based terror group has no will to go up against the IDF.  In the almost four years since conflict erupted in the south, both sides have learned from their mistakes and have increased their offensive and defensive capabilities.However, the worsening humanitarian situation in the Gaza Strip has led IDF Chief of Staff Lt.-Gen. Gadi Eisenkot to warn that a war with Hamas could take place this year if the situation is not ameliorated.  The growing humanitarian crisis - which Israel’s Defense Minister Avigdor Liberman prefers to call “a tough situation”- coupled with the increased brazen acts by rogue Salafi-Jihadi groups (who are believed to be responsible for the rockets launched at Israel in recent months) might push Israel into a corner.While the Gaza Strip is a tinderbox waiting to explode, the growing Iranian entrenchment in Syria and Lebanon poses the biggest risk for Israel. Unlike Hamas in Gaza, the Iranian war machine can wreak immeasurable damage on the Jewish State. Their Lebanese Shia proxy group Hezbollah has grown both in terms of military strength, knowledge and even respect. Thousands of other Shia militants belonging to Iranian-backed militias in Iraq have pledged to fight with Hezbollah in the next conflict with Israel and several senior Shia militia leaders have been seen taking “border tours” on the Israel-Lebanon.Meanwhile the influence of Israel’s main ally, the United States, in the Middle East has waned, replaced by Russia.The Trump administration has nonetheless given the usual support for Israel, with Defense Secretary James Mattis saying that “Israel has an absolute right to defend themselves. They don’t have to wait until their citizens are dying under attack before they actually address the issue.”But the Russians, whose influence in the Middle East continues to grow, have made it clear that they view Iran’s role in Syria as crucial to bringing their devastating war to a close. Nevertheless, Moscow may be Israel’s best hope to contain Iran and prevent a war that would devastate the Jewish state.Despite that, as the two main superpowers in the region seem to have taken a backseat to the growing winds of war brewing in Israel between Iran and Hamas, the Jewish State must once again rely only on itself to prevent any sort of miscalculation.A conflict on any of Israel’s borders is not in anyone’s interests.