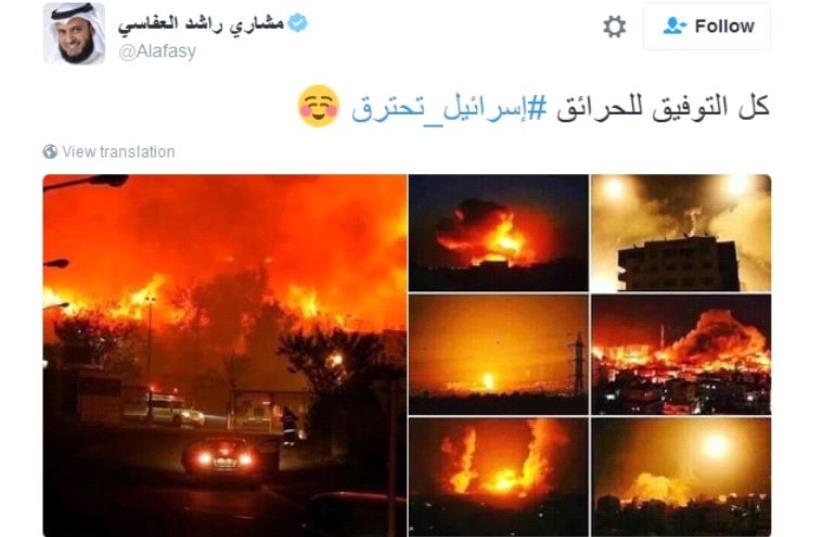 Twitter post by Kuwait's Grand Mosque, Sheikh Mishary Alfasy Rashid celebrating fires in Israel
(photo credit: screenshot)
Advertisement
Arab social media networks on Thursday were rife with inflammatory celebratory reactions in light of the myriad of brush fires that have been blazing across central and northern Israel since Tuesday.Dry conditions and high winds have spread the flames across the central and northern regions of Israel as well as parts of the West Bank.Public Security Minister Gilad Erdan (Likud) said Thursday morning that he suspected that up to half of the fires had be intentionally ignited by arsonists. Meanwhile, Education Minister Naftali Bennett (Bayit Yehudi) suggested that those who set them could not be Jewish."Tel_Aviv_IsBurning" was the most common Arabic hashtag trending on Arab social media platforms on Thursday morning. One of the most proliferous tweets was published by a police officer in Abu Dabi that read "Israel has prevented the muezzin calls to prayer, and then it was engulfed in fire." In addition social media networks in Egypt, Jordan and the Gulf emirates were also saturated with posts that indicated that the fires were nature's retribution over an controversial Israel bill to ban outside loudspeakers from places of worship, such as the likes used in the five-time daily call to prayer by mosques. The imam of Kuwait's Grand Mosque, Sheikh Mishary Alfasy Rashid, also chimed in issuing incendiary remarks to his following of 11 million on Twitter. "Good luck to the fires. #Israel_IsBurning," he wrote in an Arabic Twitter post accompanied by a smiling face icon and various photographs of the daily fires across the country.


In another tweet, he wrote that the blazes were "due to the prevention of the calls of the muezzin in occupied Palestine."Another Kuwaiti sheikh, Nabil Ali al-Awad, also took to Twitter in a fiery rant to his 6 million followers on the social media platform. "God burned their hearts and their homes and their money and their bodies and make their graves inflamed...because of what they did to the [Muslim] believers," he wrote alongside the hashtag "#Israel_IsBurning."The Persian Gulf sheikh later returned to Twitter to apologized for using the word "Israel" in his previous post, attempting to explain that "there is no such entity. I used the word as part of a hashtag."