Clashes grip Temple Mount as rioters hurl petrol bombs, stones and fireworks at police
Advertisement
President Reuven Rivlin condemned the dozens of masked Muslim youths who took up arms and set up barricades on the Temple Mount on Sunday morning, attacking police and Jewish visitors with rocks and firebombs during the Tisha Be’av fast day.The rioting took place as tens of thousands of Jews made a pilgrimage to the Western Wall to mourn the destruction of the First and Second Temples that once sat atop the contested holy site.“The acts of violence and terrorism committed – especially today – against worshipers at holy sites must be condemned unequivocally,” Rivlin said.(Photo: ISRAEL POLICE)“I express my support for the security forces and for their determination to prevent any harm or interference to the prayers at the Western Wall, the remnant of our Temple. Such acts of hatred cannot be tolerated, and we will not allow any disturbances to prevent Jews from praying at this holy site.”According to police spokesman Micky Rosenfeld, officers entered the compound shortly after 7:30 a.m. after receiving intelligence that a large group of masked Muslim youths had barricaded themselves overnight at al-Aksa Mosque to attack Jewish visitors on Sunday morning.“The police were attacked immediately upon entering the Temple Mount compound by Palestinians armed with rocks, firebombs, fireworks, and metal pipes,” said Rosenfeld, adding that four officers were lightly wounded during the confrontation.“Using non-lethal means, officers pushed the assailants into al-Aksa Mosque – without entering it themselves – to secure the area, and ensure visiting hours could take place without further incident.”Some 850 visitors were able to tour the area amid heightened security until 11:30 a.m.(Photo: ISRAEL POLICE)The Joint List faction issued a statement claiming that Agriculture Minister Uri Ariel, who visited the Temple Mount on Sunday, violated the status quo.“Ariel’s provocative entrance brought an incursion of Israeli security forces to al-Aksa Mosque at night and in the morning and caused a violent confrontation,” a Joint List spokesman said.“Police forbade hundreds of believers from exercising their freedom of worship and barred their entry to al-Aksa Mosque through use of violence and physical force.”Joint List MKs Masud Gnaim, Abdel-Hakim Haj Yahya and Taleb Abu Arar visited the Temple Mount and described the atmosphere there as “warlike,” blaming the visit by “Ariel and extremist warmongering settlers who are trying to change the status quo in every way.” 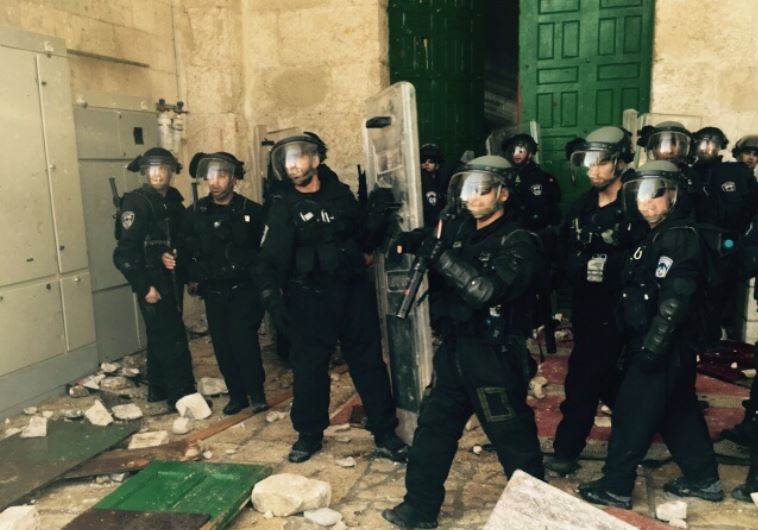 (Photo: ISRAEL POLICE)Despite the Arab MKs’ allegations, Prime Minister Benjamin Netanyahu has repeatedly stated that the status quo on the Temple Mount – allowing unlimited Muslim visitation, while severely restricting Jewish visitation and prayer rights – will not be altered.Jordanian Information Minister Mohammad al-Momani condemned what he described as the “storming” of al-Aksa Mosque by “Jewish settlers,” headed by Ariel, and describing the Jewish presence as “harming the sanctity of al-Aksa.”In a statement released Sunday afternoon, Momani called on Israel to “take responsibility” and prevent any such instances from occurring in future.While no arrests were made on the Temple Mount, Rosenfeld said three Palestinian youths were arrested in other parts of the Old City for throwing rocks at officers.Hours later, during rioting in the capital’s northeastern neighborhood of Isawiya, three more officers were lightly wounded by rocks and fire-bombs hurled at them by masked youths, Rosenfeld said. The officers were treated at the scene by Magen David Adom paramedics, and the rioters were dispersed with stun grenades. No arrests were made.Rosenfeld commended the police response to Sunday’s unrest.“The police force acted with skill and professionalism, showing determination and courage under a shower of rocks, fireworks and iron bars,” he said.However, deeming the situation on the Temple Mount unacceptable, Culture and Sport Minister Miri Regev blamed the violence on “police incompetence in dealing with the rioters.”Regev called on Public Security Minister Gilad Erdan to instruct the police to ensure that Jews can enter the site on Tisha Be’av, and all other days, unencumbered by Arab threats and violence.“The Temple Mount is a holy place for Jews and Muslims,” Regev said.“The government must make sure that Jews can go on the Temple Mount throughout the entire year, certainly on Tisha Be’av.”Moreover, Yisrael Beytenu chairman Avigdor Liberman called on Netanyahu to personally instruct police and security forces to stop the rioting on the Temple Mount and allow Jews to observe Tisha Be’av appropriately.“We cannot allow in sovereign Israel for Jews not to be able to mark such an important day for us,” Liberman said.“Today’s events are a result of the lack of reaction and weakness of the government in facing a chain of recent terrorist events in Jerusalem, which encourages the rioting Arabs to continue escalating their actions,” he said MK Bezalel Smotrich (Bayit Yehudi) called for the police to close the Temple Mount to Arabs and allow Jews to pray at the holy site.“For thousands of years, Jews sit on the floor on Tisha Be’av and cry over the loss of our spiritual and national liberty,” Smotrich said. “We returned to the land of our fathers and saw the vision of the prophets begin to be realized and rebuilt our freedom in our land. In a historic mistake, Moshe Dayan gave the keys to the Temple Mount to the Wakf [Muslim religious trust]. The time has come to fix the historical distortion.”Although the High Court of Justice has upheld Jewish prayer rights at the Temple Mount, which is overseen by the Wakf, it also allows police to prevent any form of worship there if they believe such activities will incite a “disturbance to the public order.”This caveat has resulted in a contentious debate among religious Jews and the government, as any form of public prayer among Jews there – including moving their lips to appear to be praying – is considered a “public disturbance,” and has resulted in detainments.Sunday’s violence followed a near riot at the contested holy site on Thursday morning, when Avia Morris, 20, who was part of a group being heckled by a Muslim mob, was arrested for responding that “Muhammad is a pig.”The confrontation was recorded by a witness, and went viral shortly thereafter, further inflaming tensions.Rosenfeld said police removed Morris from the area when the two groups nearly came to blows, and subsequently placed her under arrest for disturbing the public order.On Sunday, following her release, Morris detailed the series of events that preceded her arrest.“I went up to the Temple Mount on Thursday, with women and babies,” she told Arutz Sheva. “Throughout the walk, for about 40 minutes, we were surrounded by dozens of Arabs screaming at us and following us; they shouted ‘slaughter the Jews’ and ‘Allah Akbar,’ and made the ISIS [Islamic State] gesture.”Morris added that, despite being surrounded by police, the officers did nothing as the Arab mob continued to shout threats and encroach on the Jewish group.“The police ignored our requests and said if we were to say one word they would take us down from the Mount and arrest us,” she said. “They did not stop their attempts to hurt our feelings and to try to insult Judaism.”After what Morris described as an hour of anti-Semitic “provocations and humiliations,” she said she insulted the Prophet Muhammad, at which time the police took action.“Only after we began to respond and I said ‘Muhammad is a pig’ [did] the police distance them from us,” she said. “Suddenly they were able to keep them at bay.”Later, Morris said, she was arrested at her home in the West Bank’s Binyamin region.During her arraignment at Jerusalem Magistrate’s Court, Morris said police claimed that she incited the unrest. However, after the presiding judge reviewed the videotape, Morris was released with the provision that she must stay away from the Old City for the next several days.Despite the trauma she experienced, Morris said she felt compelled to retaliate during the altercation.“It is impossible to remain silent over the humiliation of the Jews on the Temple Mount and the incitement to murder against us,” she said.“When we accept it, the police chief does not address it.”Morris continued, “Only if we begin to respond [to the harassment] will the police know how to silence them.”