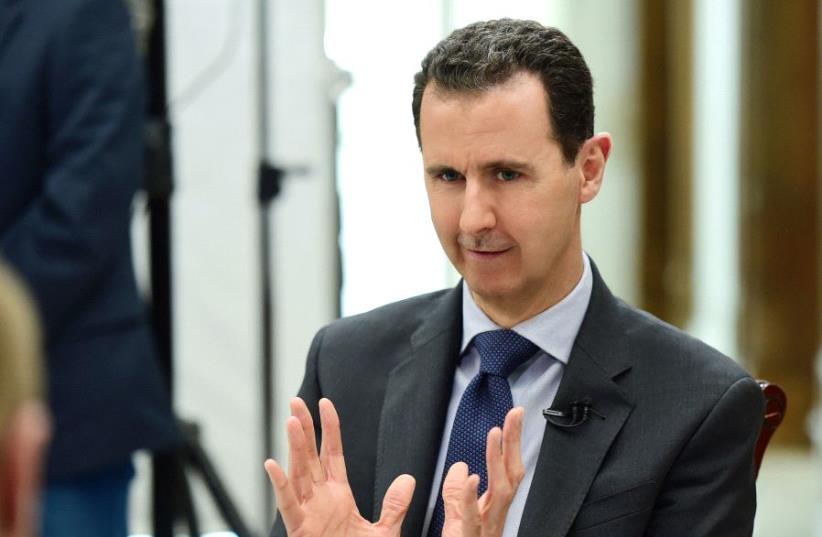 Syria's President Bashar al-Assad speaks during an interview with RIA Novosti and Sputnik in this handout picture provided by SANA on April 21, 2017.
(photo credit: REUTERS)
Advertisement
Syria's foreign ministry sent officials complaints to the UN on Tuesday, demanding action in response to what they claimed were joint Israeli-rebel attacks on military facilities near Damascus in recent days, the official SANA news agency reported.In a letter to the UN Secretary-General and the head of the Security Council, Damascus protested "the two new rockets attacks carried out by the Israeli occupation authorities on areas in Damascus Countryside, which were accompanied by attacks with shells by terrorists on the neighborhoods and suburbs of Damascus city," SANA reported.
Syrian state media on Monday said Israel had fired missiles at a Syrian military facility in the Damascus countryside, adding that Syrian air defense systems had intercepted three of the missiles.
"Our air defenses are confronting an Israeli missile attack on one of our sites in the Damascus suburbs and three of the targets were downed," state news agency SANA said, adding the attacks happened at 11:30 p.m. Monday.
A witness told Reuters late on Monday three strong explosions were heard from the direction of Jamraya, west of Damascus. Another witness said thick smoke could be seen rising over the area.
Jamraya contains a military research facility, which was hit by what was believed to have been an Israeli attack in 2013.
Israel in the past has targeted positions of Lebanon’s powerful Hezbollah group inside Syria where the Iran-backed group is heavily involved in fighting alongside the Syrian army.
On Saturday Syrian state media said Israeli missiles struck a military position south of Damascus, and in September Israel attacked a Syrian military site believed to be linked to chemical weapons production.
An Israeli military spokeswoman said they do not comment on foreign reports.