Scene of stabbing attack in Jerusalem
Advertisement
A peaceful morning stroll by a group of elderly Jewish women on a promenade overlooking sweeping vistas of Jerusalem turned into a bloody nightmare when two masked terrorists stalked and stabbed two of the octogenarians in their backs.The attack, which ironically took place adjacent to the Peace Forest, occurred at approximately 8:30 a.m. when five women, all in their 80s, were walking together on the popular Haas Promenade in Armon Hanatziv/East Talpiot, police said.“The two terrorists stabbed them in the back multiple times, both in the upper body, and fled the scene toward the adjacent neighborhood of Jebl Mukaber,” police spokesman Micky Rosenfeld said shortly after the stabbings.“Police and emergency units rushed to the scene and gave immediate medical assistance before transferring both women to Shaare Zedek Medical Center in moderate condition. While a forensics team searched the area, police set up roadblocks to find the terrorists.”Roughly one hour later, Rosenfeld said, Border Police officers arrested two suspects matching the description of the assailants, but after extensive questioning, both young men were released without charges.“Police are continuing to search for the terrorists involved in the attack and hope to make arrests soon,” he said later in the day.Shortly after the attack, Shaare Zedek Medical Center spokeswoman Shoham Ruvio said both victims were in stable condition and expected to survive.“They are stable and conscious,” said Ruvio. “One, 86 years old, was stabbed in the back three times and is in the intensive care unit. The second victim, 82, was also stabbed multiple times and is in the department for heart surgery.She doesn’t need surgery, but is being closely monitored due to a preexisting heart condition.”Meanwhile, Rosenfeld said, security has been heightened throughout the capital, and will continue at elevated levels throughout the holiday.“All public areas will have additional police units deployed and nothing will be left to chance, as the city observes Remembrance Day and Independence Day,” he said.Last October, the Armon Hanatziv/East Talpiot neighborhood made international headlines after two terrorists from Jebl Mukaber stormed an Egged bus and stabbed and shot four victims to death before being killed by police.To stymie the deadly violence between the Arab and Jewish communities, police temporarily set up a concrete wall and checkpoint around Jebl Mukaber, which was soon taken down amid protests by human rights groups.Near the scene of Tuesday’s attack, a cross-section of residents expressed shock and indignation that the assailants preyed on women in their 80s. 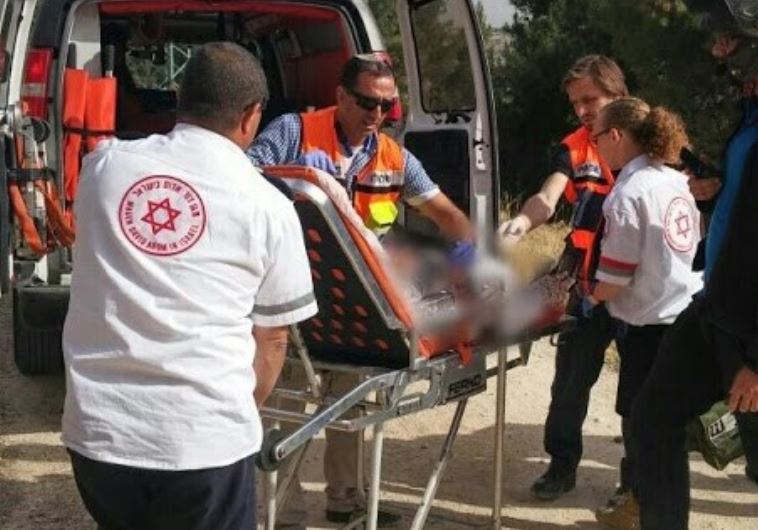 Meir Shahar, 67, a longtime resident of Armon Hanatziv/ East Talpiot said young Arab residents from Jebl Mukaber have long intimidated and terrorized Jews living in his neighborhood, but said he was stunned that defenseless elderly women were stabbed in the back.“These are old women!” he said with clear revulsion. “What did they do that they should be stabbed? You fight with an army, you fight with grown men – you don’t fight with old women!” Moreover, Shahar said many Arab residents from Jebl Mukaber work in menial jobs throughout the neighborhood or routinely visit the area, making daily interaction with Jewish residents unavoidable.“All the people from there come to the promenade, to our post office, to our supermarkets and to our hospitals – to every place there – and nobody says ‘You are Arab, why are you coming here?’” he said.“The Jewish people in this area are with these people all the time, and it is known that a lot of the people who live there are connected with Hamas.They are not peaceful people, and the [Jewish residents] are afraid. The children going to school, older people traveling at night – everyone is afraid.”Indeed, May Schultz Sclair, who was riding her bicycle near the scene of the attack, said she now avoids the promenade, where she once routinely visited.“It’s very troubling. It’s shocking, and certainly restricts my sense of peace of mind living in my own neighborhood,” she said. “The area where it happened is a place we used to walk during Shabbat, and we don’t go there anymore because we just don’t feel it’s safe.”“We are worried about violence carried out by residents of these Arab towns,” continued Schultz Sclair, a retiree originally from the US.“I often find young people walking around in groups – especially boys – intimidating; and given the violence that we’ve had, it’s increasingly intimidating. I have stayed away from there for at least the past year.”Evgeny Kaveshnikov, 32, who made aliya from Russia two months ago, said he was deeply troubled by the attack, which took place just a few meters from where he was riding his bike later that day.“When I heard about this, I worried a lot, of course, because I want to live in peace with everyone, but it’s very difficult to understand why these women were attacked, because it’s not their fault,” he said.“I’m very worried that it has happened here, and that it is happening everywhere. I feel pain hearing about this. This is difficult to understand for a normal man. I am new here, and it’s horrible for me to see this.”Although Kaveshnikov said he is not concerned for his own safety, he said the safety of his mother, wife and children is another matter.“I will make sure they do not come here,” he said.Meanwhile, Ilana Rass, a middle-aged woman who was walking alone near the scene of the attack, expressed her concerns about its religious and educational underpinnings and implications.“I think if Muhammad came back, he would say to these people, ‘You are crazy,’” she said.“I only read the Koran once, but when I did, I didn’t find anything about stabbing old women in the back. This book is supposed to be about love.“I think it is a problem concerning education. There is no education, only aggression,” she added. “These people must be given a good education and learn how to live with other people.”