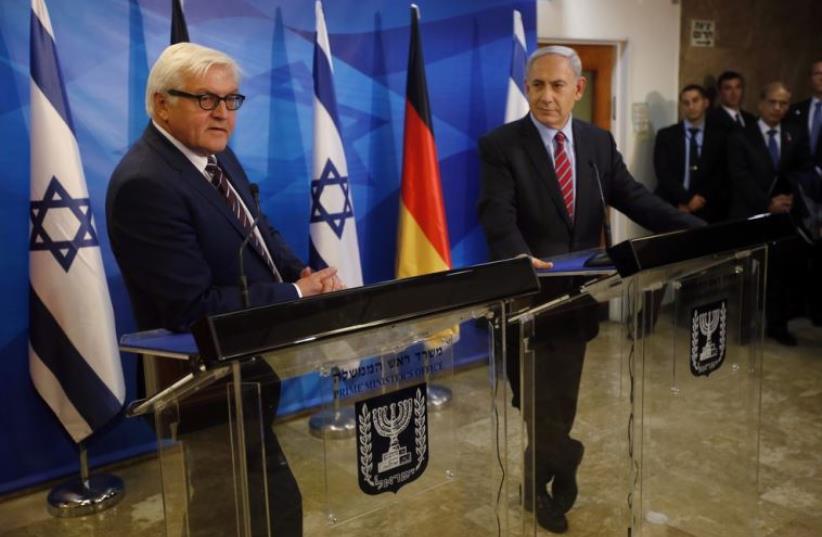 Benjamin Netanyahu and Frank-Walter Steinmeier in November 2014
(photo credit: REUTERS)
Advertisement
BRUSSELS - Israeli settlement building must not undermine efforts to relaunch peace talks with the Palestinians, German Foreign Minister Frank-Walter Steinmeier said on Monday, adding that Israel's security was also important."It has to be the will of the parties to create results which mean that Israel and Palestine can coexist peacefully in the Middle East," Steinmeier told reporters ahead of a meeting of European foreign ministers in Brussels."Everybody knows that the security situation in Israel is part of that, in the same way as the fact that the basis of such negotiations cannot be undermined by the construction of settlements. It is difficult but there is no alternative."Steinmeier's remarks came the day after some 70 countries and international organizations, including the foreign ministers of more than 30 states, attended a conference on Middle East peace in Paris, which included neither Israeli nor Palestinian participants. The conference ended with a rather bland statement reaffirming support for a two-state solution, and a call to stop violence and “ongoing settlement activity.”Israel adamantly opposed the conference, with Prime Minister Benjamin Netanyahu repeating on Sunday that he felt it was “futile” and a relic of an approach to the Middle East that will end on Friday with the inauguration of US President-elect Donald Trump.Herb Keinon contributed to this report.