To catch the attention of students, the group decided to apply the same strategy applied by pro-Palestinian students for the infamous Israel Apartheid Week. 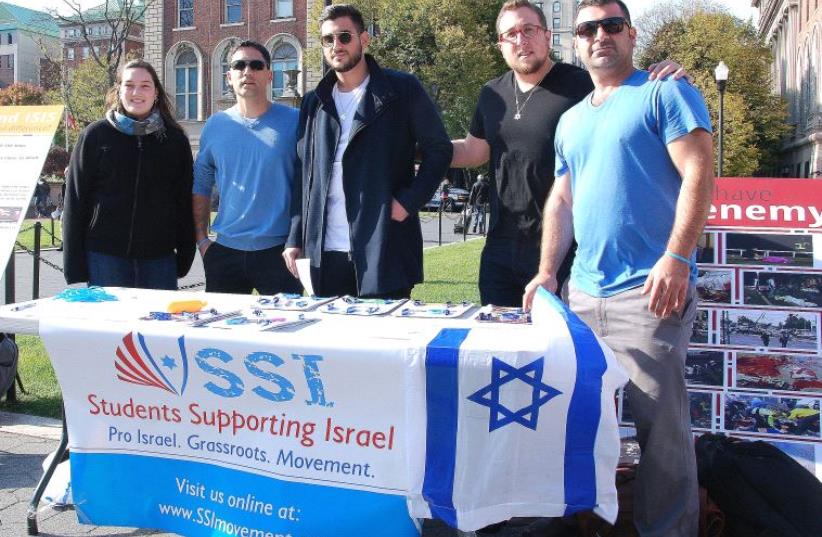 Rudy Rochman (middle) and the Reservists on Duty
(photo credit: MAXINE DOVERE)
Advertisement
NEW YORK – The group Reservists on Duty, made up of active service personnel in various reserve units in IDF who have been fighting against anti-Israel movements since December 2015, has taken its efforts to New York City this week, advocating on college campuses.Representatives of the organization stationed themselves in the center of the Columbia University campus on Tuesday, displaying signs about Palestinian treatment of women and Hamas’s oppression of Palestinians, among others. The initiative was held in partnership with Columbia’s Students Supporting Israel as well as Palestinian Media Watch, which provided content for the display.Reservists on Duty executive director Amit Deri told The Jerusalem Post the goal is to “expose the hate system against Israel on US campuses.” 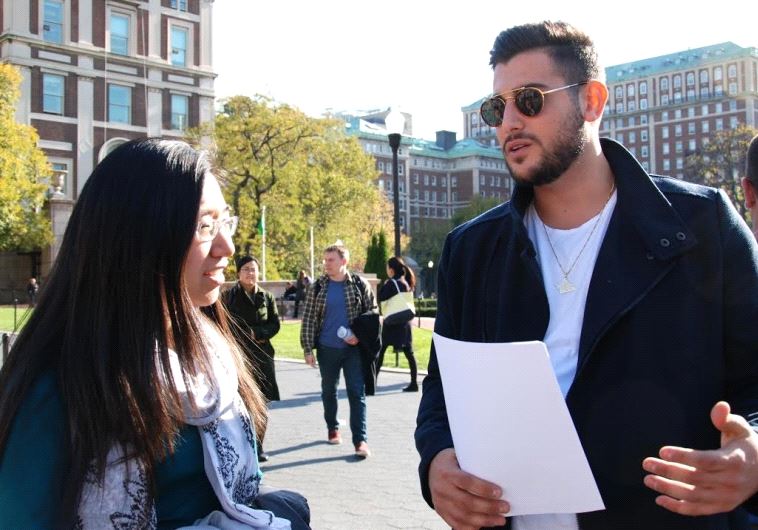 Rudy Rochman talking to a student who passed by the display (Maxine Dovere)“The situation today with hate groups is that this is all the average American college student who goes around campus sees and hears,” he said. “It’s only about Israelis doing this or that, a lot of lies, a lot of blood libels.“We came here for activism, not just to talk,” he added.To catch the attention of students, Deri and his colleagues have decided to apply the same strategy applied by pro-Palestinian students for the infamous Israel Apartheid Week, held every spring on campuses worldwide: Discuss the misconduct of the “other side.”They named the event “Palestinian Values Day.”“The situation today is that you have hundreds of Jewish organizations doing a great job, but most of them are talking about Israel and how we have Nobel prizes, how we are moral, very sophisticated, we have hummus,” Deri said. “That’s nice, and it attracts some people, but nobody is talking about what the Palestinians are doing to their own people, and the values of that society.“We want the average American student to ask himself questions: Do I want to associate myself with the values of the leaders of the Palestinian society? And I think the answer is no,” he told the Post.“They don’t want to be people who support human-rights violations on a daily basis; they don’t want to support people who are throwing gays from rooftops.“If you are from America, these are not your values, this is not you,” he said.While Deri knows convincing anti-Israel individuals of his message would be almost impossible, he said his real target audience is those who simply don’t know much, if anything, about the conflict.“The world is divided into 10% good guys, 10% bad guys, and the rest, 80%, are ignorant,” Deri said. “When they are going by and they see Israel Apartheid Week, they tell themselves Israel is bad. And then those ignorant people go to the other side, to the bad guys.”For an entire afternoon, Reservists on Duty and Students Supporting Israel approached students passing by their booth on Columbia’s college walk to discuss the displays, providing them with flyers and informational sheets about Palestinian practices.During one exchange, a Christian student studying Arabic told Deri he had never seen such displays and was very much used to seeing anti-Israel posters around campus.A Muslim student, who did not wish to be referred to by name, also stopped to engage in a conversation with activists from Reservists on Duty, whom he quickly called “brothers.”“After I saw the photos and I saw it said something about Palestinians and Islam, since I am Muslim, I wanted to stop and understand what this was,” he told the Post. “I listened to Palestinian people, and now this is a chance for me to listen to the other side, and this way we can understand both sides and their concerns and opinions so that we can then judge.“I believe that, as human beings, we are created in this world to try to solve problems, spread goodness and peace; this is our responsibility as human beings,” he added. “I can’t ignore this problem.”Although he believes “the State of Israel makes many mistakes, including torture and oppression,” the Muslim student shook hands with the IDF reservists and said he was glad to listen to their points of view, which he believes are valid as well.Dozens of students and even faculty members stopped by the booth on Tuesday, asking for information or taking pictures of the posters put out.“Our goal is to defend Israel’s right to exist and show the context on the ground,” Rudy Rochman from Students Supporting Israel at Columbia, who also gave out flyers to passersby, told the Post. “It was important to bring Palestinian Media Watch and Reservists on Duty to come and give that context and story to people.”Rochman said although a large part of the student population simply doesn’t care about the Israeli-Palestinian conflict, it is mostly exposed to anti-Israel narratives from very vocal rival groups, such as Students for Justice in Palestine.Bringing information about Hamas and oppression of Palestinians by their own leadership to the Columbia campus is therefore very significant, he said.Reservists on Duty held a similar activity on the campus of New York University on Wednesday. On Thursday, its representatives will meet with several American Jewish organizations, in a forum hosted by Consul-General in New York Dani Dayan, to discuss one of their main challenges today: connecting with Jewish organizations willing to partner with them for activities on campuses, which they see as a central battlefield in which to “expose Palestinian hatred,” promote Israel’s point of view and fight the Boycott, Divestment and Sanctions movement.