Marwan Barghouti, who is serving five life sentences for the murders of five people, said in a Facebook post that the strike was merely "suspended." 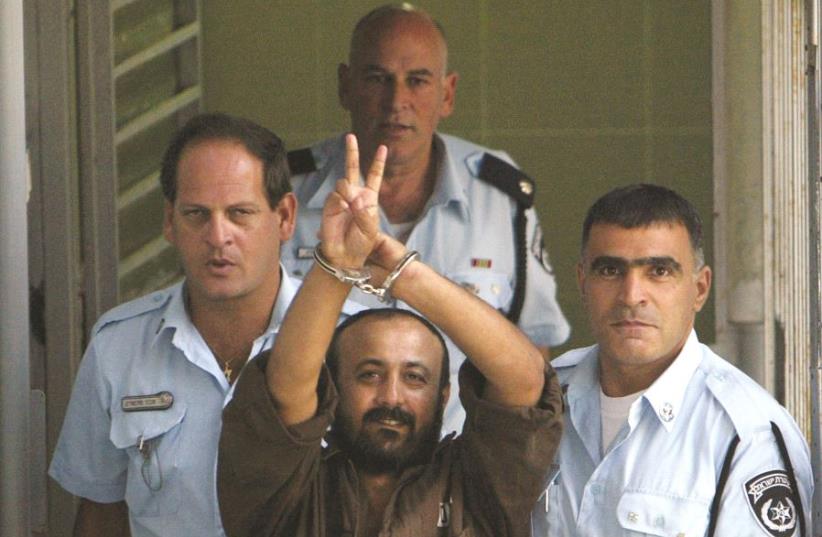 Marwan Barghouti entouré de gardiens de prison
(photo credit: REUTERS)
Advertisement
Imprisoned Fatah leader Marwan Barghouti said on Tuesday that the recently ended 40-day mass hunger strike of Palestinian security prisoners would resume if certain conditions for the prisoners are not improved.In a statement released on his official Facebook page, Barghouti, who is serving five life sentences for the murders of five people said that strike was “suspended.”“In light of this and with the coming of the month of Ramadan we decided to suspend the strike to give an opportunity for dialogue with the Israel Prisons Service,” Barghouti said adding, “but we affirm our preparedness and readiness to resume the strike in the case that the prison service does not fulfill its promises to the prisoners.”Barghouti also called on Palestinian Authority to refrain from peace negotiations with Israel until the approximately 6,500 Palestinian security prisoners are released.Public Security minister Gilad Erdan dismissed Barghouti’s statement, stating that no commitment or promises were made. Barghouti was “forced to invent achievements,” Erdan said in a statement on his Twitter account on Tuesday.The 40-day hunger strike by Palestinian security prisoners ended Saturday.However, both sides disputed the conditions of the ending the strike. The Prisons Service said that the strike ended after an agreement was reached between the Palestinian Authority and the Red Cross to provide the prisoners with a second monthly family visit.The Prisons Service added that the agreement was an internal PA-Red Cross matter and they did not negotiate with the prisoners or agree to discuss their demands at a future date.
Palestinian inmates in Israeli jails end hunger strike (credit: REUTERS)
Palestinian officials, including Barghouti, dispute this, stating that a number of demands were met to improve the prisoners’ living conditions. The Prisons Service says its treatment of prisoners meets international standards.