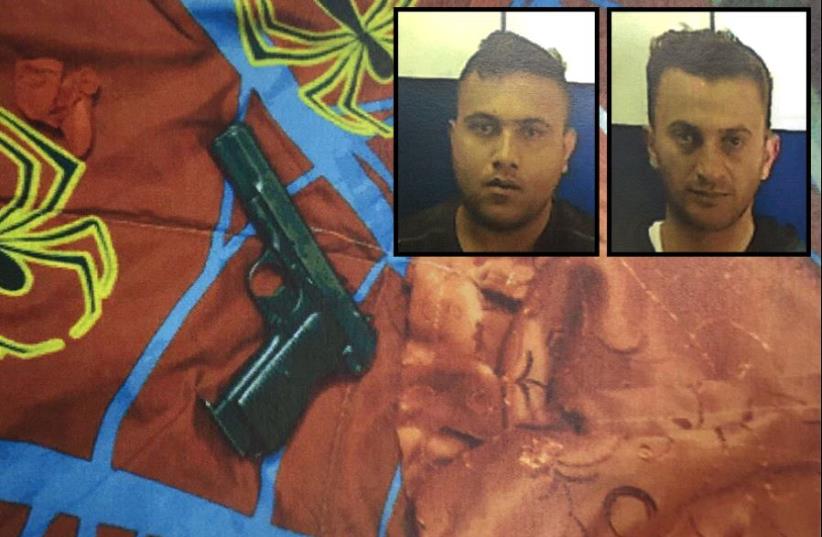 Members of a terrorist cell arrested by Israeli security forces in the Jenin area of the West Bank
(photo credit: SHIN BET)
Israeli security forces recently uncovered and arrested members of a terrorist cell affiliated with the Popular Front for the Liberation of Palestine (PFLP) in the Jenin area of the West Bank, the Shin Bet (Israel Security Agency) announced Thursday. During arrest operations, security forces seized vehicles and various weapons used by the cell's members to carry out attacks targeting Israeli civilians and IDF forces in the West Bank during the month of April. Investigations revealed that the terror operatives' activities included shooting attacks on IDF bases in the Jenin area near the Salem checkpoint, as well as plotting to carry out shooting attacks on an IDF patrol, the Shin Bet reported.The cell was also responsible for various shooting attacks against Israeli communities in the West Bank, including the settlements of Shaked, Hermash and Shavei Shimron. In addition, the Shin Bet said that the cell planned to conduct shooting attacks at civilians traveling in their vehicles on roads in the region.The Shin Bet named the arrested members of the cell as Shafiq Mahmud Shafiq, 35, and his cousin Louis Ahmed Shafiq Za'abaneh, a 33-year-old lawyer linked to the PFLP, the second-largest group in the PLO after Palestinian Authority President Mahmoud Abbas's ruling Fatah faction. Both suspects were residents of the Palestinian town of Fahma in the Jenin region.An indictment against the two is expected to be filed in the coming days.