According to the 0404 web site, IDF soldiers have posted reactions to the newly issued rules of engagement. 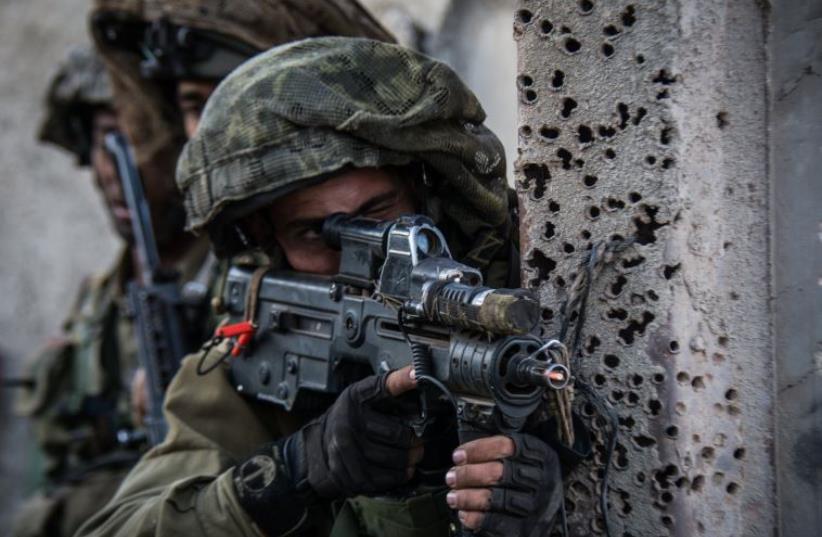 The Givati Brigade's Tzabar Battalion practices complex maneuvers in an urban warfare environment
(photo credit: IDF SPOKESPERSON'S UNIT)
Advertisement
In light of heightened security tensions in the West Bank, the Israeli defense establishment on Tuesday temporarily revised the rules of engagement for combat soldiers on the ground serving in the Palestinian territories, triggering a wave of resentment within the ranks.According to the 0404 web site, IDF soldiers were furious over the newly issued rules of engagement that they say will encourage more Palestinian terrorism.The Jerusalem Post's Hebrew-language sister publication Ma'ariv learned on Tuesday that the defense establishment is now requiring soldiers to hold their fire except for instances in which there is a genuine threat to their lives.Under the previous rules, soldiers were permitted to fire a number of warning shots in the air before taking aim at a potential terrorist.Soldier testimonials indicate that the new rules forbid troops from shooting at a terror suspect's lower extremities during an arrest. The interim guidelines now instruct soldiers to fire in the air.The defense establishment wishes to avoid situations in which IDF gunfire leads to the death of an alleged terrorist, a development that is liable to spark widespread protest and further fan nationalistic flames.One soldier serving in the Givati infantry brigade told 0404: "There are new rules and we are now studying them. If a Molotov cocktail is thrown at me, even from a distance of just 10 meters, I'm not allowed to shoot at the person throwing it.""These are bizarre rules, and I, as an officer, will have difficulty in telling my soldiers and looking them in the eye," the infantryman is quoted as saying. "Somebody upstairs thinks that we are female models and not soldiers in the Israel Defense Force."An officer in the Border Police also voiced his displeasure to the web site."Yesterday they started to brief us [on the new rules], so the report is accurate," he said. "From this moment onward, we are not permitted to do our usual full arrest protocol as we have been doing until now.""In order to understand the significance, if a terror suspect rams his car through a checkpoint and the driver didn't run over anybody and didn't attack anybody, then the soldiers are not permitted to shoot at the car," the officer said. "They are only allowed to fire in the air.""The new rules are very confusing, and there is a lot of anger amongst the troops," the officer said. "This is all a big fiasco. Where are they leading us to?""We are in total shock," said one soldier stationed near the Jewish settlement of Beit El, not far from Ramallah. "We received the new instructions, and we just don't know how to digest this.""All of us have no doubt that this will only increase the number of terrorist attacks once [the Palestinians] see that we are not shooting," the soldier said.In response, the IDF Spokesperson's Unit told Ma'ariv: "For obvious reasons, the IDF does not comment on the specifics of the rules of engagement. Nonetheless, in light of assessments on the ground, [the army has] issued new instructions that clarify the manner in which the forces are to deal with threats that do not constitute a clear and immediate danger to their lives."