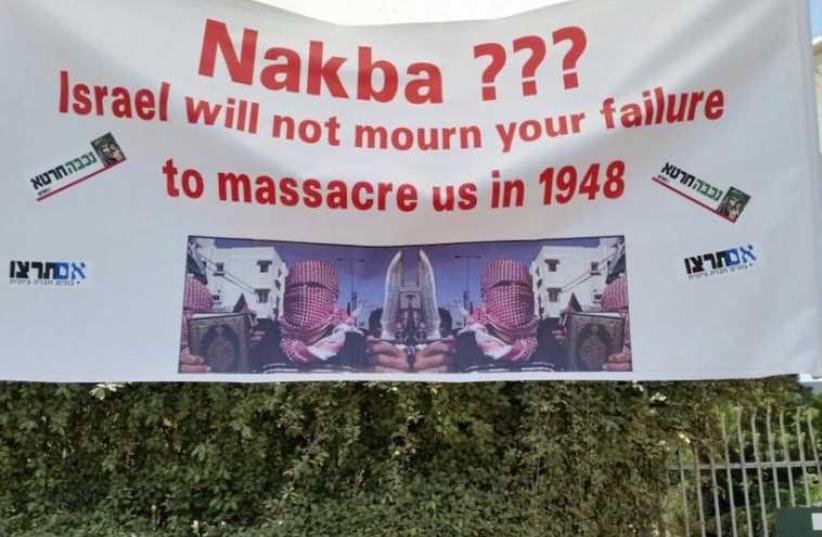 A poster shown at the Nakba Day commemorations in Tel Aviv University
(photo credit: IM TIRTZU)
Advertisement
The Van Leer Jerusalem Institute rejected the accusation that it is comparing the Holocaust to the Palestinian Nakba by commemorating both in an upcoming event, after it drew criticism this week, its director told The Jerusalem Post on Thursday.Prof. Gabriel Motzkin, director of Van Leer and a professor emeritus of philosophy at the Hebrew University, said on Thursday the real issue about the Nakba is that Israeli society is “unwilling to understand the trauma that constitutes the identity of this other people.”“I am a Zionist through and through, but we forget that we are living with human beings, it is a human issue,” he said.It is not about ideology, he continued. You can be a right-wing supporter of settlements and still want to understand the Palestinian narrative, but it does not necessarily mean that you agree with it, he said.The right-wing Im Tirtzu organization and the left-wing think tank exchanged letters last week over the planned event.A book, titled, The Holocaust and the Nakba: Memory, National Identity, and Jewish- Arab Partnership, is set to be launched at the institute on September 7. The institute is listed as one of two publishers of the Hebrew-language work.It contains articles and essays by Jewish and Palestinian researchers, writers and philosophers on the issue.“The book invites the readers to think of ways to remember and discuss the Holocaust and the Nakba together, and investigate the possibility of such combined thought – not because the events are identical or even similar, but because they are both traumatic and identity- constructing,” the Van Leer website states.Im Tirtzu, which describes itself as a “pro-Israel grassroots movement,” responded to the announced program by sending a letter to Motzkin, demanding the event be canceled.Matan Peleg, head of Im Tirtzu, told the Post on Monday that for many years there has been an effort in Israel by some to liken the Holocaust to the Nakba.There also is a cultural element, he said. “If you call for a transfer of Palestinians out of Israel, the public will scream at you. The Holocaust is a special event that cannot be compared to anything.“We view with complete shock and great concern the unimaginable comparison between the Holocaust of European Jewry, where millions of Jews were gassed, burned, and buried alive – and the defeat of Israel’s enemies in the War of Independence,” Im Tirtzu’s letter to the institute read.Peleg told the Post on Thursday that his organization will continue to fight against Van Leer’s holding of the event.Segev Israel Afriat, head of the Shorashim Shel Netina (Roots of Giving) NGO, which supports Holocaust survivors in Israel, wrote a letter on Tuesday to Motzkin, urging him to think twice about holding the book launch.It would be “the first nail in the coffin of the memory of the Holocaust,” Afriat said.Afriat said that he would be happy to refer Motzkin to “thousands of Holocaust survivors who would tell him how such an evening is a negation of our history.”The Jerusalem think tank, appearing to respond to such criticism, said in a Facebook statement on Wednesday, “The institute has no intention of comparing the Holocaust to the Nakba, which are two events that are not identical and do not resemble each other.”Furthermore, the event “is certainly not meant to offend Holocaust survivors, who are dear to our hearts,” it said.“We are in a better situation than them [the Palestinians], because we have a history from before the Holocaust,” argued Motzkin. However, “the Palestinians as a nation didn’t exist before the Nakba,” they came into being because of what was a traumatic event for them, he said.When you talk with Palestinians about the Holocaust, they often draw on their experience of the Nakba, Motzkin said. Dialogue between Jews and Arabs about the Jewish tragedy often comes down to Jews saying to Arabs: “Why don’t you forget your trauma?” And then, the Arabs respond, “We will forget ours if you forget the Holocaust,” he said.“Im Tirztu forgets that other people are human,” Motzkin argued.Responding to Peleg’s argument that some issues are out of the bounds discussion, Motzkin responded, “What does it mean to be outside the bounds in a country with free speech?” Moreover, he continued, why is Im Tirtzu seeking to so closely identify being Jewish with the Holocaust when it should be defined by scripture and tradition.Motzkin said the institute received a letter from Ramallah asking to see the book. If we want the Palestinians to understand the Holocaust, then we have to at least listen to them, he asserted.For the generations that did not experience the Holocaust or the Nakba, these events are about how we construct a collective memory, he said.Several articles in the book are right-wing, even going so far as saying the book should have never been published, Motzkin said. “The book has many different views.”Asked if he would have changed anything if he had known it would have led to such an uproar, he replied that he perhaps would have changed the title, since what is really being discussed are the memories of the two events.Bar-Ilan University Prof. Gerald Steinberg, head of the Jerusalem-based NGO Monitor, told the Post the fact that the German Green Party-affiliated Heinrich Böll Foundation, which promotes the Palestinian campaign linking the Holocaust and the Nakba, is supporting the event, is “very disturbing.”Asked if the German NGO is backing the event, Motzkin replied that Heinrich Boll was “never involved in this.”In fact, it asked this week to remove its name from the launch invitations, saying it had never been involved in the project.Asked to elaborate, Motzkin explained that the German NGO had supported bringing Israelis and Arabs together to discuss the Holocaust. It funded such get-togethers from 2007 to 2009, and the idea of the book and including discussion of the Nakba evolved from them.