The situation in the Old City of Jerusalem is currently under control.

Palestinian protest at Damascus Gate, July 28 2017. (CREDIT: Seth J. Frantzman)
Advertisement
Amid high security in the Old City of Jerusalem, thousands of worshipers attended Friday prayers at the Temple Mount in Jerusalem. Crowds dispersed peacefully from the compound, where entrance to prayer-goers was limited to men aged 50 and older and all women.Clashes were reported in the West Bank between Palestinians and the IDF following Friday prayers, particularly in Bethlehem, Nablus, Kalkilya, Hebron, Kafr Qadum and the Tomb of Rachel.
The Palestine Red Crescent said that one Palestinian was wounded by live fire, two by rubber coated metal bullets and ten from tear gas inhalation during clashes in Bethlehem.
While the situation in the Old City is currently under control, the Palestinians that gathered to pray at the Temple Mount on Friday expressed their disappointment in the current situation.In interviews with Israeli television, Palestinians said that the conflict is not yet over and that they were upset about the age limit set for entering the Temple Mount on Friday, as well as the ongoing "occupation" of Temple Mount by Israel and Israeli security forces. A large number of young Palestinians made their way to the entrance of the compound and prayed outside in protest at the restrictions.
Palestinian prayer in the east Jerusalem area of Wadi Joz, near the Temple Mount, July 28, 2017. (Marc Israel Sellem)
The police were on high alert Friday morning, expecting disturbances and demonstrations in the Old City of Jerusalem, according to the Police Foreign Press Spokesman.The police have adopted security measures in the attempt to maintain the violence, including only allowing men aged 50 and older to enter Temple Mount, closing a number of roads and deploying extra policemen and border policemen to the vicinity of the Old City. Women of all ages will be allowed to enter the site. The police stated that these "security measures are being taken to prevent and to respond to any outbreak of violence."In a joint security meeting prior to the Friday prayers at Temple Mount including Public Security Minister Gilad Erdan, Police Chief Roni Alsheich and Jerusalem Police Chief Yoram Halevy, Erdan stated that the police is taking the necessary steps to lull the situation.He also added that the incitement still exists and anyone that Israel "will not hesitate to use a  firm hand" with ones who provoke the situation.The expected violence in Jerusalem comes after Muslims renewed prayer at Temple Mount on Thursday, after almost two weeks of boycotting prayers at the holy site. Muslims returned to pray at Temple Mount after Israel removed security measures that angered the Muslim world, including metal detectors and security cameras, installed after the July 14 terror attack near Temple Mount. 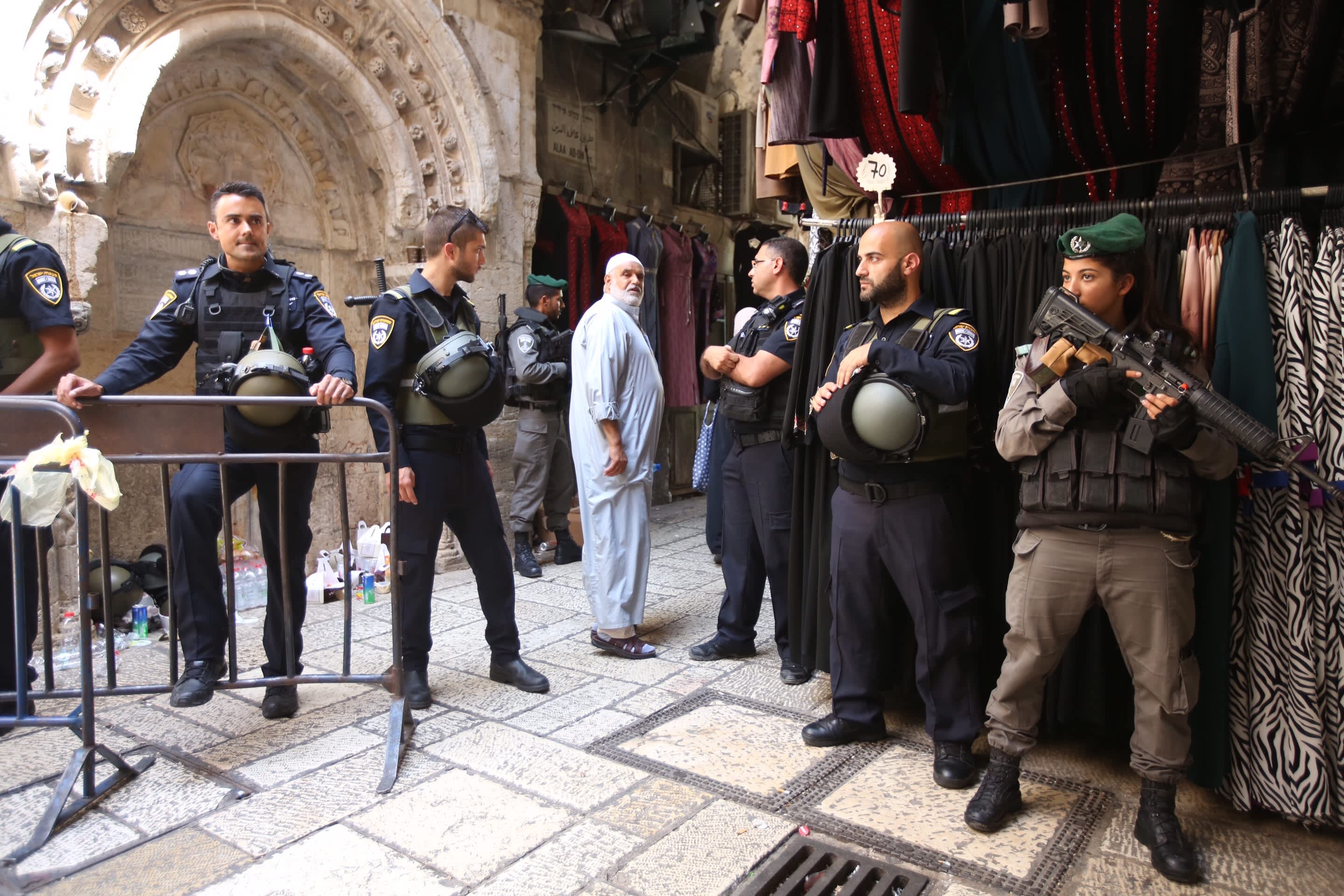 Israeli security on high alert at the Old City of Jerusalem, July 28, 2017 (Marc Israel Sellem)
Palestinians and Israeli police forces clashed Thursday during the Muslim return to Temple Mount, where a number of suspects were arrested and Palestinian leaders predict additional clashes Friday. PLO executive committee member Wasel Abu Yusuf termed the behavior of the Israeli security forces on Thursday “very dangerous,” after thousands streamed into the mosque compound on the Temple Mount for afternoon prayers.While police said the Palestinians began the violence by throwing stones, Palestinian leaders said it was the police who were responsible for starting it. Nasser al-Kurd, a Palestinian merchant, told Al Jazeera television that merchants trying to bring candy into the compound were beaten by security personnel and that angry youths responded by throwing stones. “Soldiers kicked us, beat us and took the candy from us,” Kurd said.“Tomorrow is Friday prayers, and today the leadership called on people to come and pray at al-Aksa,” Abu Yusuf told The Jerusalem Post. “The results tomorrow depend on the army, police and security bodies. If the suppression and closure of gates continues, it will create a battle in Jerusalem. This type of behavior is a spark and makes religious war. This behavior brings us back to the zero point.”Qadura Fares, head of the Palestinian Prisoner Club and a leader in Fatah, said the police behavior was “terrible.”“It has to be understood that force won’t work. Jerusalem is so sensitive that you have to draw the conclusion that [creating] facts on the ground and coercion are not the way. The government is trying to create a mentality that Arabs understand only force, and the soldiers are influenced by incitement from the government,” he said.“If there is wise leadership there need not be an explosion, but the government [ministers] are competing for the rightwing vote. [Prime Minister Benjamin] Netanyahu, [Education Minister Naftali] Bennett and also [Yesh Atid chairman Yair] Lapid are competing over who can be more extreme.“Tomorrow will be a dangerous and sensitive day,” Fares continued. “If the police and Border Police take a decision to act with restraint and allow this day to pass even if the Palestinian people feels victorious and displays happiness, things will go peacefully. But if the Israelis continue to try to show who is sovereign in Jerusalem it will be dangerous. If the Palestinian joy turns into a strategic test for the State of Israel there will be an explosion.”According to a statement released by the IDF, dozens of Palestinians also took part in violent riots in several locations along the border between the Gaza Strip and Israel over the past few hours, where they burnt tires and threw stones at the fence and at IDF forces.IDF forces were deployed to the areas where the riots were taking place and "are working to prevent damage to the perimeter fence," read the statement adding that troops fired at a number of key instigators.According to the Palestinian Ministry of Health, 16-year-old Abed al-Rahman Abu al-Maysa was killed east of al-Bureij camp during the clashes with troops on the fence.The IDF is investigating reports of al-Maysa's death.Ben Lynfield and Anna Ahronheim contributed to this report.