The two events had distinct flavors. 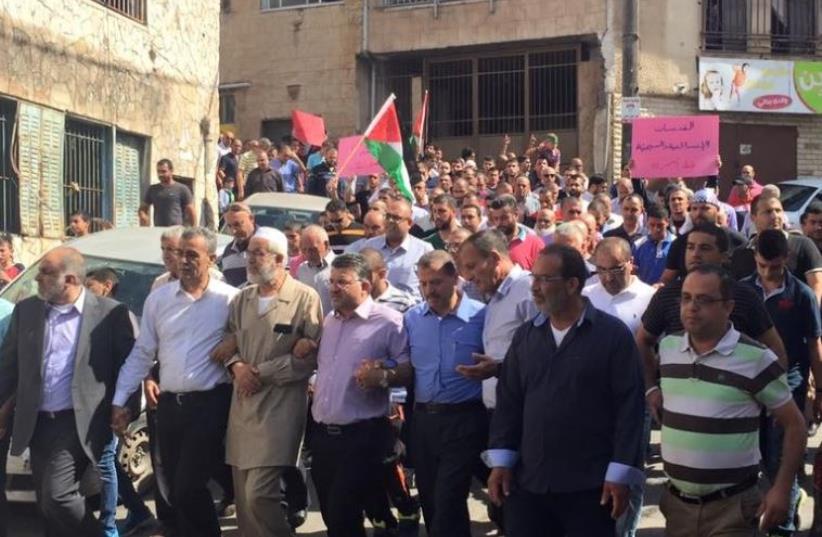 Israeli Arab leaders demonstrate in Umm al-Fahm
(photo credit: Courtesy)
Joint List lawmakers held demonstrations on Friday in Tel Aviv and Umm el-Fahm amid the surge of violence.The two events had distinct flavors. The Arab-Jewish Hadash party held a rally in the heart of Tel Aviv, promoting coexistence and calling for the end of the “occupation.”In the northern Arab city of Umm el-Fahm, Arab legislators held a march that included the Islamic Movement in Israel, which Prime Minister Benjamin Netanyahu has blamed for incitement to violence.Balad chairman Jamal Zahalka and Hadash MK Yousef Jabareen were shown at the march in pictures posted on Zahalka’s Facebook page.“The struggle will continue to reach the goal of al-Aksa without provocative visits of right-wing extremists,” Zahalka told The Jerusalem Post on Friday.Zahalka was referring to Netanyahu’s decision late on Wednesday to instruct police to bar both Jewish and Arab ministers and lawmakers from visiting the Temple Mount.The move sparked anger among right-wing and Arab lawmakers.On Thursday afternoon, Zahalka tested the ban, saying he was “protecting the [Aksa] Mosque from crazy people,” referring to right-wing Jews.Police blocked him from entering the Temple Mount.Jabareen told the Post on Friday that the march was meant to express opposition to “the ongoing oppression of our Palestinian people in east Jerusalem and the entire occupied territories.”In addition, we are marching against “Netanyahu’s continuous incitement against Arab leaders and the Islamic Movement,” he said.“We are calling for the establishment of a Palestinian state alongside Israel as the sole solution to this conflict.”At the Tel Aviv rally, Joint List chairman Ayman Odeh (Hadash) said, “We came to demonstrate in order to break the silence and shout in both languages that Arabs and Jews refuse to be enemies.“All civilians should be removed from the cycle of violence and the horror of war,” he said.Odeh called for the immediate start of negotiations between Israel and the Palestinians in order “to end the occupation and establish a Palestinian state within the 1967 borders.“Only the end of occupation will guarantee real peace and security for both peoples,” he said, adding, “The silent majority on both sides want a just peace.”Hadash MK Dov Henin blamed the “occupation” for leading to the explosion in violence.Lahav Harkov contributed to this report.