Israel has feared that Friday’s attack, in which three Israeli-Arab terrorists killed two policemen, could spark a third intifada. 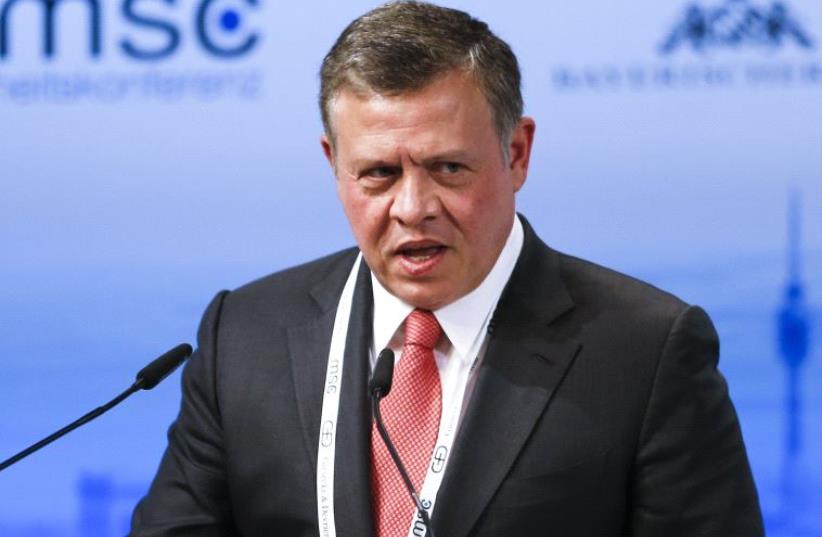 Jordan's King Abdullah speaks at the Munich Security Conference in Munich, Germany, February 12, 2016
(photo credit: REUTERS)
Advertisement
Jordan’s King Abdullah on Saturday called for calm as he condemned the terror attack near the Temple Mount in a phone call with Prime Minister Benjamin Netanyahu, according to a report in The Jordan Times.Israel has feared that Friday’s attack, in which three Israeli-Arab terrorists killed two policemen, could spark a third intifada. The Temple Mount is under Israeli control and Jordanian custodianship and is managed by the Islamic Wakf. Jews are allowed to visit, but not worship.During the conversation, King Abudulla called on Israel to reopen the Temple Mount, which had been closed for security reasons in the aftermath of the incident.
Jordanians take to the streets to protest Israel"s temporary shutdown of the Temple Mount
The Saturday call followed a similar but rare conversation right after the attack between Netanyahu and Palestinian Authority President Mahmoud Abbas. Prior to leaving for France and Hungary on Saturday night, Netanyahu said he would gradually open the Temple Mount to worshipers as he dismissed accusations that Israel was disrupting the status quo, a charge which in the past had led to violent attacks against Israelis.“I decided that as of tomorrow, in the framework of our policy of maintaining the status-quo, we will gradually open the Temple Mount, but with increased security measures,” he said.“This evening, I held a discussion with the top security leadership and I instructed that metal detectors be placed at the entrance gates to the Temple Mount. We will also install security cameras on poles outside the Temple Mount... which give almost complete control over what goes on there,” Netanyahu added."Before the onset of Shabbat [Friday, 14 July 2017], I spoke with the parents of our two heroic policemen who were murdered on the Temple Mount. I sent them a hug from every citizen of Israel and participation in their awful grief. Also before Shabbat, I directed that the mourners' tents of the families of the contemptible murderers be destroyed,” he said. On Friday, and again on Saturday, Netanyahu had held consultations with security officials, including: Public Security Minister Gilad Erdan, Israel Police Insp.-Gen. Ronni Alsheich, ISA Director Nadav Argaman and Jerusalem District Police Commander Yoram Halevy.Israeli officials have assured the Trump administration it has no intention of changing the status quo security arrangement on the Temple Mount, known to Muslims as the Holy Sanctuary, the White House said in a statement on Saturday.Describing a shooting attack that killed two Israeli police officers as a "heartbreaking" act of terror, the president's press secretary strongly condemned the event, which took place at ground zero of the Israeli-Palestinian conflict."Yesterday, the Holy City of Jerusalem– which means 'City of Peace'– became a scene of terror," the White House statement read. "There must be zero tolerance for terrorism. It is incompatible with achieving peace and we must condemn it in the strongest terms, defeat it, and eradicate it."The president's special adviser on international negotiations, Jason Greenblatt, similarly condemned the attack on Friday, praising Palestinian Authority President Mahmoud Abbas for swiftly speaking out against the attackers."The attack forced the government of Israel to temporarily close the Temple Mount/Haram al Sharif to conduct its investigation," the press secretary said. "Israel has assured the world that it has no intention to alter the status of this holy site, a decision which the United States applauds and welcomes.”The EU issued a strongly worded condemnation of the attack, stating that it was “not only a crime against people on duty, but also a profanation of this holy site,” its spokesperson said in Brussels.  “There can be no justification for such a crime or any act of terror. The EU offers its condolences to the families of the victims of the shootings."“Jerusalem is a city sacred to three religions. The status quo at the Temple Mount/Haram al-Sharif must be preserved. The EU calls on all leaders to condemn violence and all acts of terrorism when they occur, and to work towards restoring the dignity and safety of this holy site,” the EU said.Michael Wilner contributed to this report.