Lebanese journalist: 'Aleppo would have been safe like the Golan were it annexed by Israel' 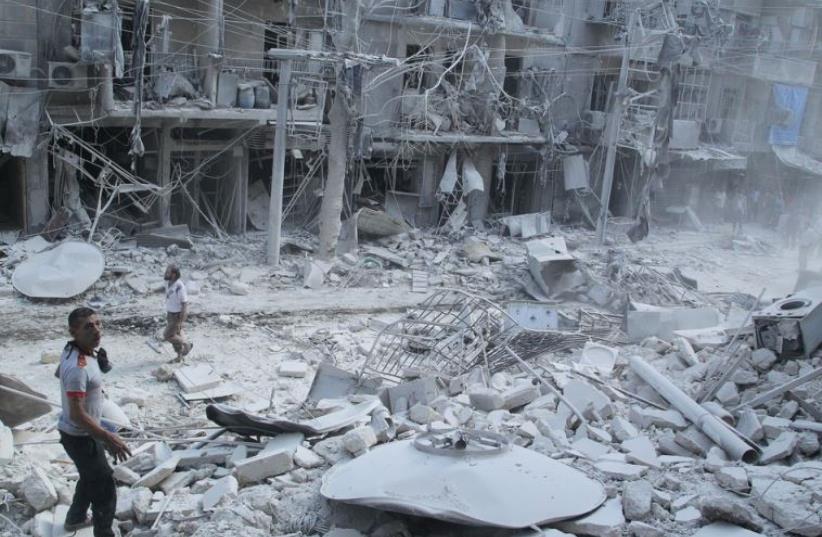 Residents look for survivors at a damaged site after what activists said was a barrel bomb dropped by forces loyal to Syria's President Bashar Assad in Aleppo
(photo credit: REUTERS)
Advertisement
In a contentious move, Naidm Koteich, a well-known Lebanese political analyst revealed his support for Israeli annexation of the currently embattled Syrian city of Aleppo, arguing that were this scenario to take place, the city would have been peaceful, like the Golan.In a comment he wrote on his Twitter page, Koteich expressed dismay over the absence of an Israeli move to annex Aleppo."If Israel would have annexed Aleppo, it would have been safe today, like the Golan. Aleppo's citizens would have been better off living under occupation than living under ruins," Koteich wrote.Israel took the Golan Heights during the 1967 Six Day War, and in 1981 extended Israeli law to the region, thereby de facto annexing it.Koteich's comment came shortly after Prime Minister Benjamin Netanyahu declared that Israel would never renounce the Golan, infuriating Syrian politicians. Thus, many Syrian social media activists began wrangling with Koteich for voicing pro-Israel opinion. A Twitter user affiliated with the Syrian opposition said: "the carnage in Aleppo increases our hatred for Zionists, because without Israel, Assad would have gone."Many other users cursed Koteich, claiming that he should be incarcerated for being an Israeli agent.
Koteich anchors DNA, a daily show broadcast on the Lebanese Future Television Network. On his show, he tends to criticize Iran and its involvement in Lebanon, calling Lebanon "a mafia state" controlled by Hezbollah.The northern Syrian city of Aleppo has been witnessing endless bombardments by the Syrian air force in the last week, in a bid to oust rebel factions from the city's outskirts. Since the city was excluded from the truce forged by the American administration and Russia on Friday, airstrikes continue hitting the city, causing hundreds of civilian causalities.
Advertisement
Subscribe for our daily newsletter