"Hezbollah are not using their weapons in internal politics. They only ensure our resistance against the State of Israel."

Lebanon's President Michel Aoun attends the 28th Ordinary Summit of the Arab League at the Dead Sea, Jordan March 29, 2017.
(photo credit: REUTERS)
Advertisement
Lebanese President Michel Aoun has dismissed claims that Hezbollah should be disarmed as long as Israel “fails to respect” UN resolutions and international law.The terrorist organization ensures Lebanon’s “resistance against the State of Israel,” he said in an interview published Friday by French daily Le Figaro, in which he defended his close relations with Hezbollah, which played a major role in his election as president in 2016.After securing the backing of Hezbollah, 82-year-old Aoun filled a power vacuum left by a deadlock that paralyzed Lebanese politics for two-and-a-half-years, following the departure of former president Michel Suleiman.“This wasn’t an alliance [with Hezbollah] but rather an agreement,” said Aoun. “Thanks to the agreement, we have been able to avoid civil war in Lebanon. I sincerely believe that I have saved the Lebanese state.“[As a result], Hezbollah has altered its political stance and has respected Lebanese sovereignty,” Aoun told Le Figaro. “Nasrallah has said as much in an address: Hezbollah has renounced its project to install an ‘Islamic Republic’ in Lebanon.” 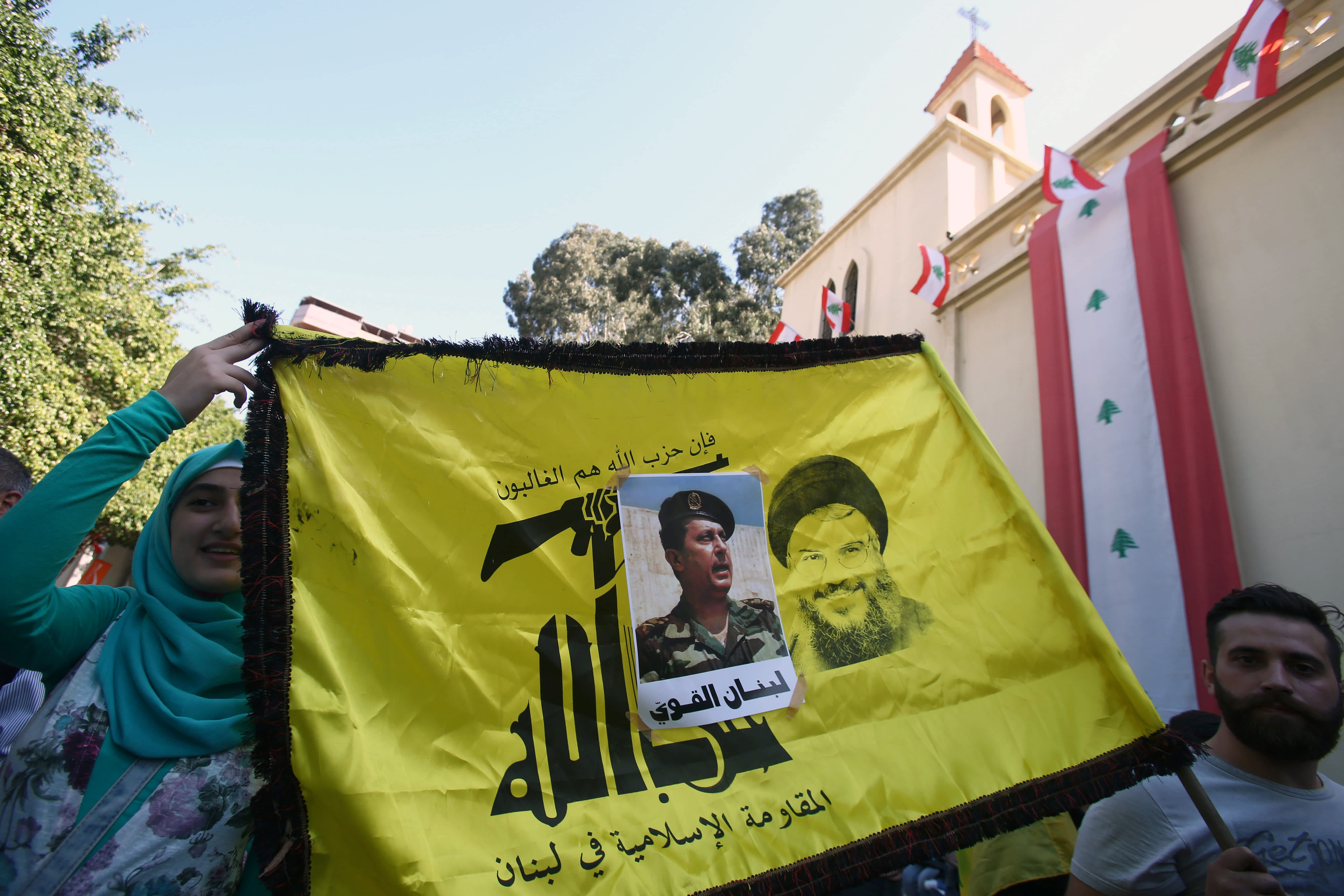 People carry a Hezbollah flag with a picture of newly appointed Lebanese President Michel Aoun stuck on it, in the Haret Hreik area, southern suburbs of Beirut, Lebanon October 31, 2016. (Reuters)
Lebanon’s 16-year civil war was finally brought to an end in 1990 with the Taif Agreement, requiring the “disbanding of all Lebanese and non-Lebanese militias.” Hezbollah, however, was permitted to keep its weaponry with Syrian forces in control of South Lebanon.Aoun dismissed the claim that Hezbollah should follow a process of disarmament like all other Lebanese militias.“Hezbollah are not using their weapons in internal politics. They only ensure our resistance against the State of Israel, which continues to occupy part of our territory and which refuses to apply UN resolutions regarding the Palestinians’ right to return,” Aoun said.“You cannot disarm Hezbollah at the same time that Israel fails to respect UN Security Council resolutions,” added Aoun. “Israel would have the right to wage war whenever it wants at the same time that others would be deprived of their right to weapons to defend themselves? No, it’s not possible.”Aoun, a Maronite Christian, was asked whether Lebanese Christians should also be armed to ensure self-defense at a time when Christians are being persecuted in nearby countries.He rejected such a scenario, saying: “We reinforce the army to protect the entire country, including its Christians. Peace must be founded on law and a solution to the Palestinian issue.”The Lebanese president also rejected concerns over Hezbollah’s July 2006 conduct, when its cross-border infiltration and attack on an IDF patrol led to the Second Lebanon War.“It’s a classic border incident which escalated due to an Israeli overreaction,” said Aoun. “You’ll say that Hezbollah violated territory that day – it’s possible. But these types of incidents happen very frequently. A few days ago, Israeli fighter jets broke the sound barrier above [Lebanese territory], violating our airspace and shattering glass everywhere.”In 2006, Aoun signed a formal memorandum of understanding between his Free Patriotic Movement party and Hezbollah. Yet Aoun, when asked by Le Figaro, rejected having any “direct contacts” with Hezbollah Secretary-General Hassan Nasrallah since his election win.In remarks made after the election, largely aimed at his Hezbollah backers, Aoun vowed to “liberate the remainder of our lands from the Israeli occupation.”Aoun has, however, publicly praised Hezbollah’s role in Lebanon since assuming the presidency, openly stating in February that the terrorist group fills a void in the south of the country.“Hezbollah weapons are not contradictory to the state, but are an essential part in defending the country,” Aoun told the Egyptian TV network CBC. “As long as a part of the territory is occupied by Israel, and as long as the army is not powerful enough to fight Israel, we feel the need to maintain the weapons of the resistance to complement the army.”Aoun’s comments were subsequently condemned by the UN Special Coordinator for Lebanon Sigrid Kaag, who warned that UN Resolution 1701 prohibits Lebanon from arming non-state actors.“UN Resolution 1701 is vital for Lebanon’s stability and security. The resolution calls for disarmament of all armed groups. No arms outside control of state,” Kaag wrote on Twitter.During the Second Lebanon War, approximately 4,000 rockets were fired by Hezbollah at Israeli civilian centers. Today, the Lebanese Shi’ite terrorist group, which has spent recent years fighting alongside Assad’s forces in the Syrian civil war, is believed to possess over 100,000 rockets and missiles.