The Al-Harak Al-Shababi was behind many recent attacks; Massive investigation results in multiple arrests; 'It targeted both Israel and the PA,' Israel says 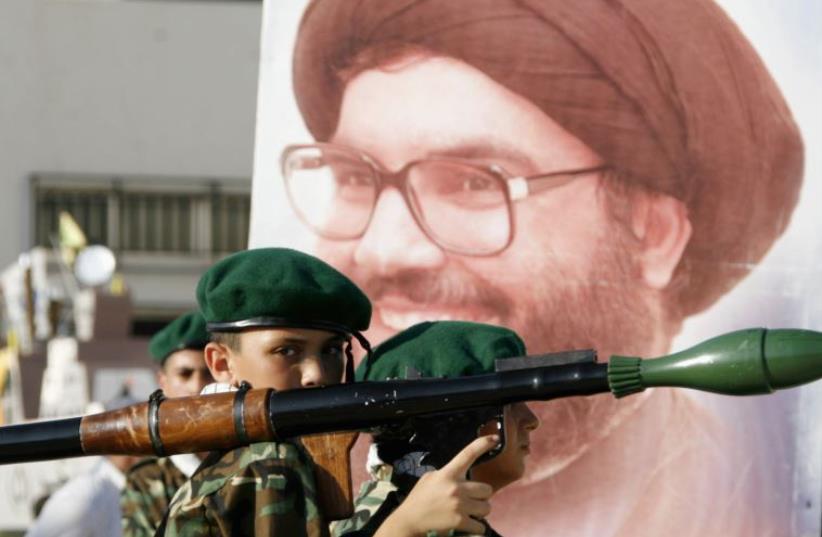 A Hezbollah member carries a mock rocket next to a poster of the group's leader, Hassan Nasrallah
(photo credit: REUTERS)
Advertisement
Acting on the advice of the Israel Security Agency (ISA) domestic intelligence organization, Defense Minister Avigdor Liberman on Monday outlawed an organization he said acted under Hezbollah and Iranian instructions to carry out terrorist attacks against Israelis and set off a wave of violence targeting Israel and the Palestinian Authority.The organization, Al-Harak Al-Shababi (Movement of Youths), has been banned “after a lot of significant information was gathered on it,” a spokesperson for Liberman said.The investigation revealed a large-scale Iranian and Hezbollah attempt to ignite violence in Israel and to topple the Palestinian Authority, the spokesperson added.The ISA said its investigation revealed that the organization sought to disguise itself as a youth movement working to change the situation in the West Bank and Jerusalem through steps in the civilian sphere.“In actuality, this is a terrorist organization headed by two operatives who oppose the Palestinian Authority,” the ISA said, naming Shafik Asli, who lives in Lebanon, and Halmi Balbisi, who lives in Jordan, “acted under the instructions and funding of Hezbollah and Iran. In the past two years, these two transferred hundreds of thousands of shekels to promote the organization’s goals and fund terrorist activities,” a statement from Liberman’s office added.Over the past year, the ISA added, the organization’s members hurled firebombs and improvised explosives at Israelis, mostly along Route 443, in Hebron and in Jerusalem. They also attempted to harm electrical infrastructure sites and the light railway system in Jerusalem. The group instigated violent disturbances on the Temple Mount.In April, PA security forces arrested a terrorist cell operating in the Ramallah area that was armed with grenades, rifles, firearms, and a large quantity of ammunition.The head of the cell who plotted attacks on Israelis was named on Monday as Imad Al-Araj, one of the heads of the now-outlawed organization in the West Bank, who headed the group’s military wing, the ISA said.Al-Araj met with Hezbollah members leaders abroad, the ISA said. The ISA also arrested weapons traffickers who supplied the cell with arms.The organization also had an alleged Hebron area chief, who was arrested by the ISA. The suspect, Hazam Al-Kawasme, told the ISA during questioning that he held meetings with the group’s leaders in Lebanon and received training with other members on how to disrupt life in Israel through attacks on the civilian infrastructure. During group meetings, the goal of toppling the Palestinian Authority, under the disguise of widespread civilian protest, was also discussed, the ISA said.Throughout 2015 and 2016, the ISA and Israel Police gathered information that showed how operatives from Jerusalem and the West Bank traveled to Lebanon and to Tunis, pretending to take part in human rights and media conferences.“In reality, these conferences were used for meetings by the heads of the organization, and with Iranian messengers and Hezbollah operatives, including Ataya Abu Samhadana, who lives in Beirut,” security forces said.Samhadana’s son headed the Resistance Committees terrorist organization in Gaza, where he was killed in 2006.Samhadana “presented himself as a Hezbollah operative, and suggested to the operatives that they take part in training camps, where they can learn how to use weapons and explosives to carry out attacks after their return. Abu Samhadana kept in contact with the operatives, and even received the names of new recruits who were sent abroad,” they added.Many suspects have been arrested in recent months around Jerusalem, Ramallah, and throughout the West Bank.The investigation revealed a significant attempt by Iran and Hezbollah to “promote terrorism against the State of Israel, including during the latest wave of violence, which began in 2005," security forces added.