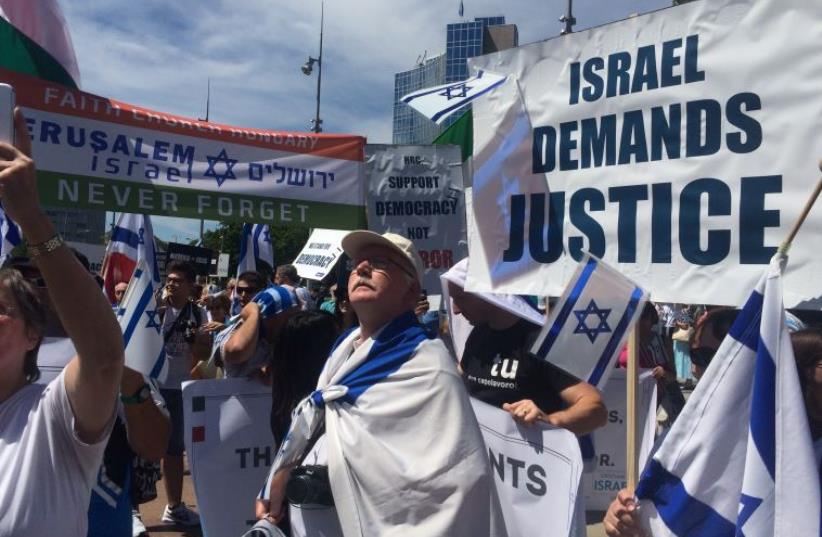 Pro Israel rally outside UNHRC in Geneva‏
(photo credit: SAM SOKOL)
Advertisement
GENEVA – Shouts of “The people of Israel live” reverberated across the square outside of the headquarters of the United Nations Human Rights Commission in Geneva Monday afternoon, as hundreds of supporters of the Jewish state rallied against a report commissioned by the organization accusing Jerusalem of war crimes during last summer’s war in Gaza.A sign carried by one protester read “16,500 missiles have been fired from Gaza into Israel,” while others toted placards calling Hamas a terrorist organization and asserting Israel’s democratic character. Several demonstrators waved posters equating Hamas with the Islamic State until organizers rushed to have them taken down.The UNHCR “needs to overcome its obsession with Israel,” World Jewish Congress CEO Robert Singer told the crowd, accusing it of a double standard that “stands in the way of an effective human rights policy.”
Members of UNHRC ‘don’t care about human rights,’ say protestors in Geneva
“Today, whenever Israel has to make use of its legitimate right to defend its existence against the thousands of rockets fired into its territories, when it tries to destroy the terrorist infrastructure of Hamas and other groups in Gaza, it is immediately accused of committing war crimes by the United Nations,” he proclaimed.The report on last year’s Gaza incursion, which was being presented officially to the UNHCR just meters from the demonstrators, charges that both Israel and Hamas may have committed war crimes.“The commission was able to gather substantial information pointing to serious violations of international humanitarian law and international human rights law by Israel and by Palestinian armed groups,” the report said, adding that “in some cases, these violations may amount to war crimes.”Israel has been excoriated by the UNHCR previously for its actions in Gaza, with South African judge Richard Goldstone issuing a scathing report stating that both sides had “possibly [committed] crimes against humanity.”Goldstone, who is Jewish, later recanted, saying “if I had known then what I know now, [it] would have been a different document.”Asserting that Israel was within its right to respond to rocket fire from the coastal enclave from which Israeli settlers and soldiers withdrew a decade ago but which is still blockaded by the Israeli Navy, the WJC’ Singer accused Hamas of being the real occupier of Gaza.Many of those on the council “don’t care about human rights,” he asserted to cheers from the crowd. “What they care about is pointing fingers at Israel to deflect attention from their own disturbing human rights record back home.”The council, he said, has passed more resolutions critical of Israel than on any other subject in its eight years of existence.“Blaming Israel for every woe has become a sport. Not just here at the UN, but here especially,” he said.Tweeting from within the council’s deliberations, Hillel Neuer of the UN Watch NGO quoted EU officials as stating that the investigation, with which Israel declined to cooperate, had “gathered info from large amount[s] of sources” and “must be taken seriously.”Compared to those deliberating within the UNHCR, “Israel if perfect,” asserted Col. Richard Kemp, the former commander of British forces in Afghanistan, one of several pro-Israel experts testifying before the commission.Several military experts have been brought to Geneva by the Jewish Institute for National Security Affairs to fill in the gap left by Israel’s boycott of the proceedings.“I have just been sitting in the human-rights commission listening to countries lining up one after the other to condemn Israel for its war crimes,” he said. “These are beacons of human rights like Cuba, Pakistan, Iran and Venezuela that exercise the highest standards of human rights,” he said sarcastically.“Hamas’s aim is to force Israel to kill Palestinian civilians” by firing from residential areas and this strategy can be “seen working in action today,” he said, accusing the UNHCR of being “a tool of Hamas’s terrorism.”Speaking with The Jerusalem Post, Kemp recalled receiving “abusive comments” from diplomats on the commission when he testified against the conclusions of the Goldstone report, stating that he believes the body to be “hostile” to advocates for Israel.Among those present at the protest was Sister Lebona, an American member of the Evangelical Sisterhood of Mary living in Germany, who said she came to support the “chosen people.”“It’s a constant lie that they spread. It’s stupid to blame Israel” for everything, added Jan Jaarsveld, a Belgian man who came to Geneva for the protest.Teodora Virga, a young Hungarian woman, agreed, saying she came to join groups from France, Italy and elsewhere because she “wants to tell the UN that we don’t agree to sanction Israel.”