The protesters barricaded themselves inside the Dome of the Rock after a large police force was rushed to the area, witnesses said. 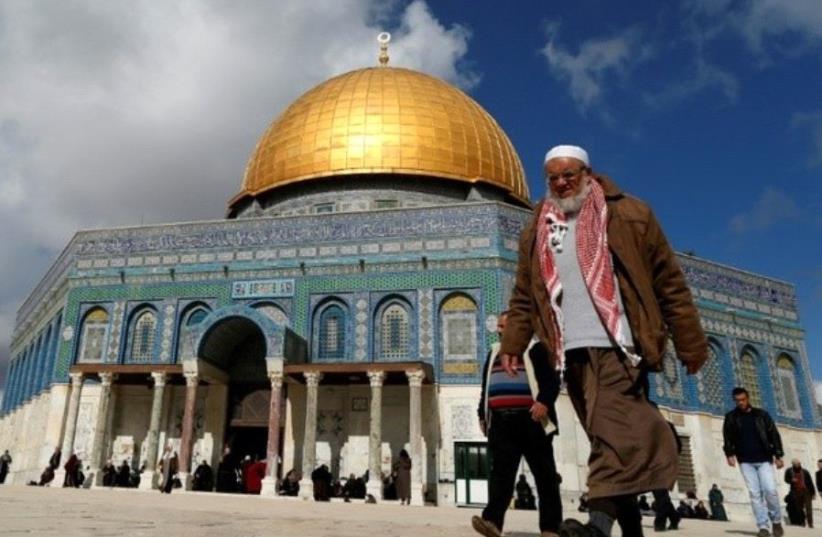 Palestinians walk past the Dome of Rock at the Al-Aqsa Mosque compound in Jerusalem's Old City, on January 13, 2017
(photo credit: AFP PHOTO)
Advertisement
Muslim worshipers and guards for the Wakf Islamic religious trust protested on Monday against an Israeli policeman wearing a kippah who tried to enter the Dome of the Rock on the Temple Mount as part of a routine security patrol.The protesters barricaded themselves inside the shrine after a large police force was rushed to the area, witnesses said. They demanded that the policeman remove the kippah before entering the site, triggering a standoff with police. The incident ended several hours later.The Wakf claimed the police detained five east Jerusalem men as they were leaving the Temple Mount after the incident. The five were identified as Fadi Elayan, Yahya Shehadeh, Ahmed Abu Alya, Awad Salaymeh and Luay Abu al-Sa’ed.The Wakf said in a statement that it had ordered the closure of the Dome of the Rock after an Israeli policeman “attempted to storm it while wearing a kippah.” It said that two Israeli policemen enter the site daily – in the morning and evening – for a routine security check.“The guards at the Dome of the Rock asked the policeman to remove his kippah before entering the site, but he refused and insisted on entering it even by force,” the Wakf statement said. “The guards then closed all the gates of the Dome of the Rock. Later, police officers were deployed at the entrances to the Dome of the Rock, while the guards and worshipers remained inside.”The Wakf claimed the police also prevented Muslim worshipers from entering the nearby Al-Aqsa Mosque. The police forces, it said, also prevented senior Wakf officials, including Al-Aqsa Mosque director Sheikh Omar al-Kiswani, from entering the Dome of the Rock. Kisawni later claimed he had been physically assaulted by the policemen.The standoff began shortly after Agriculture Minister Uri Ariel (Bayit Yehudi) toured the Temple Mount accompanied by scores of Jewish visitors.The Palestinian Authority’s minister for religious affairs, Yusef Edais, condemned the incident at the Temple Mount as an “assault on the feelings of Muslims and their holy sites.”“These are immoral practices that create more religious incitement inside and outside of Jerusalem,” he charged. He also accused Israel of working toward “dividing Al-Aqsa Mosque in time and space” between Muslims and Jews.