New bypass roads to be built in West Bank despite adoption of anti-settlement UN resolution. 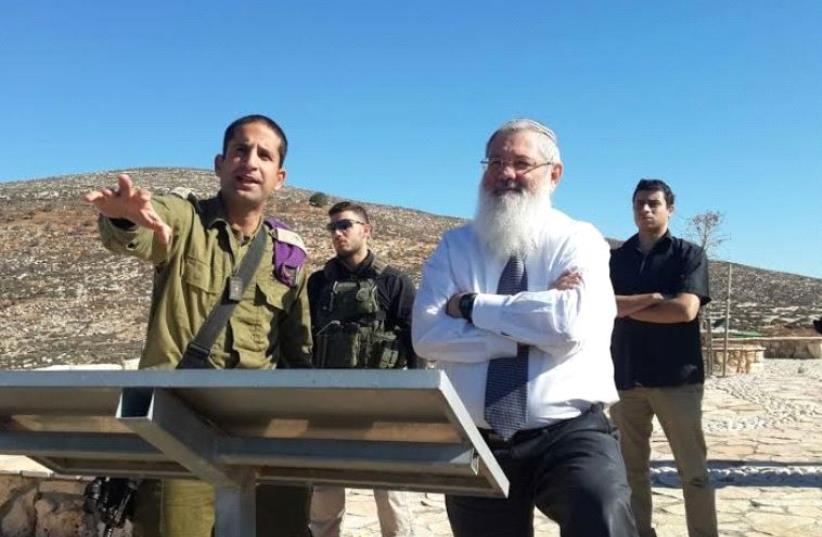 Deputy Defense Minister and Bayit Yehudi MK Eli Ben-Dahan visiting the Givati Brigade's Tomer Company in the Shomron
(photo credit: OFFICE OF DEPUTY MINISTER ELI BEN-DAHAN)
Advertisement
Israel will start the construction of a new bypass road in the West Bank next week, Deputy Defense Minister Eli Ben-Dahan told The Jerusalem Post on Monday.“It’s a strategic plan that we have for the next 20 to 30 years to connect all the main roads in the West Bank to roads in central Israel,” Ben-Dahan told the Post from his office in Jerusalem, adding that “it will strengthen the Jewish presence in the West Bank.”Despite the bombshell United Nations Security Council resolution condemning Israeli settlement activity as illegal and demanding that Israel “immediately and completely cease all settlement activities in the ‘occupied’ Palestinian territory, including east Jerusalem,” the adoption of the resolution will not have an impact on the building of the bypass roads, according to Ben-Dahan.“We have not been ordered to stop, and so we will continue,” he said, adding that now there “is a big opportunity for us to annex Judea and Samaria.”Israel has invested billions of shekels into the construction of an extensive road system in the West Bank since 1967, and bypass roads enable access to and between settlements without having to pass through Palestinian villages.The first of the three major bypass roads that will be built will connect Kfar Saba to Nablus by bypassing the Palestinian village of Nabi Ilyas. “It’s a very major road, especially for those that live in the area around Nablus who come to Kfar Saba or central Israel to work,” Ben-Dahan told the Post.The two other bypass roads would be on Route 60, the main north-south artery in the West Bank, comparable to Route 2 along the coast or the highway connecting Jerusalem to Tel-Aviv.The second road, the plans of which are set to be finalized by March, would run from Nablus to the Tapuah Junction and bypass the Palestinian town of Huwara. The current road cuts through Huwara, which has seen a series of attacks since a wave of violence broke out in the West Bank and Israel in October 2015, including on November 9, when 32-year-old Muhammad Amr tried to stab Israeli soldiers near the checkpoint before being shot.Residents using Route 60 have complained about major traffic congestion getting onto the road. “Cars get stuck in the middle of Huwara because of traffic everyday. And that’s very dangerous,” said Ben-Dahan.The third road would connect the Gush Etzion Junction to Hebron by bypassing the Palestinian refugee camp Al-Aroub and the town of Beit Umar. “People have been killed on this road. Stones and Molotov cocktails are thrown at cars everyday,” Ben-Dahan said, stressing the danger of the junction which has seen numerous attacks, including multiple deadly ones.In November of last year, 21-year-old Hadar Buchris was stabbed to death at the Gush Etzion Junction. Following the attack, Prime Minister Benjamin Netanyahu stated that Israel would start working on a “local bypass of the junction in accordance with the recommendation of the security services.”It was because of this “urgent” need that the bypass will be built, Ben-Dahan said.But bypass roads have been criticized by Palestinians and their supporters as a major obstacle for the possibility of establishing a contiguous Palestinian state, as settlement construction tends to increase following the opening of new bypass roads.In 2008, Route 398 connecting Har Homa in Jerusalem to the settlements south of Bethlehem, such as Tekoa and Nokdim, was opened. The bypass road, known as the “Liberman Road” for current Defense Minister Avigdor Liberman, who is a resident of Nokdim and served as transportation minister when construction began, allows drivers to make the trip in 10 minutes instead of the previous 40 by eliminating the need to drive through Palestinian villages.In a 2015 report by Peace Now, the group stated that in addition to the approximately 159 hectares of West Bank land expropriated for the construction of the bypass, the Jewish population in the area grew by some 90%, with 3,122 residents in late 2008 compared to 5,923 residents in late 2014, according to the Central Bureau of Statistics. The report added that “at least 450 new residential units have been built in the settlements southeast of Bethlehem since 2008.”But according to Ben-Dahan, the roads, which will be constructed as a result of cooperation between the Transportation Ministry and the National Roads Authority, will also serve Palestinians in the area. “Think of the Palestinians who live in Nablus and work in Ramallah. Without a bypass road, it’s a long drive, it’s hard.So these roads would make the trip shorter and easier for them as well,” he said.