Palestinians: Three days of rage over Trump's decision on Jerusalem

In a joint statement, the Palestinian "national and Islamic forces" announced three days of rage that would begin tomorrow and end on Friday. 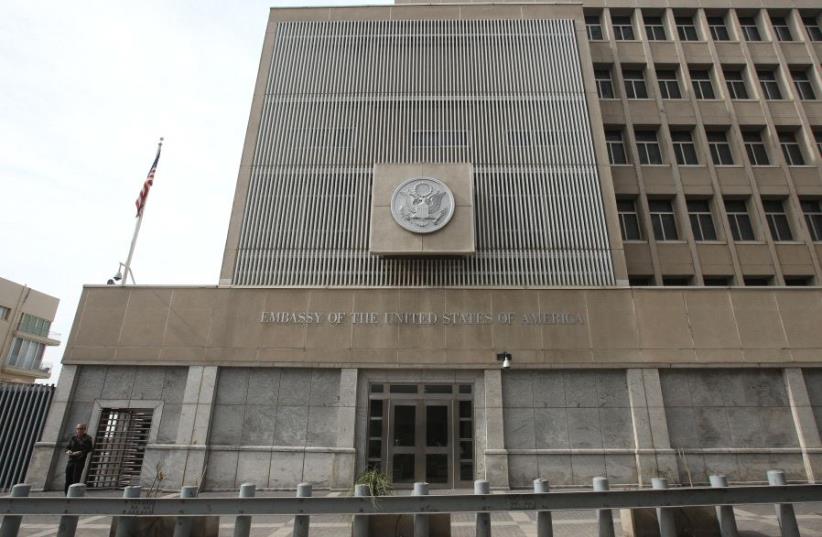 US Embassy in Tel Aviv
(photo credit: MARC ISRAEL SELLEM)
Advertisement
The Palestinian factions announced three days of rage from Wednesday to Friday in protest of US President Donald Trump's announcement to recognize Jerusalem as the capital of Israel and to transfer the American embassy from Tel Aviv.The Palestinian factions called President Trump's policy "political blackmail, which would destroy his ability to achieve regional or colonialist achievements in the region."In a joint statement, the Palestinian "national and Islamic forces" announced three days of rage that would begin Wednesday and end on Friday. "We call on all our people in Israel and around the world to gather in city centers and Israeli embassies and consulates, with the aim of bringing about general popular anger," the statement said.The statement added that "a huge protest should be launched in order to reject out of hand the attempts of the US administration to transfer the embassy from Tel Aviv to Jerusalem or recognize Jerusalem as the capital of the State of Israel. The right of the people and the nation to act in all legal and diplomatic ways within the international community, the international law in the Hague, in order to torpedo this attempt," the statement said, calling for an emergency meeting of the leaders of the Islamic countries and the Jerusalem Committee to emphasize their rejection of the American moves in Jerusalem."President Abbas warned of the danger of President Trump's decision on the peace, security and stability process in the region and in the world," spokesman Nabil Abu Rudaina said.According to Ruadina, Abbas "reiterated our firm position that there is no Palestinian state without East Jerusalem as its capital in accordance with the decisions of the international community and the Arab peace initiative.""President Abbas will continue his contacts with world leaders to prevent this unacceptable step," added Rudaina.The Jordanians also announced that King Abdullah had been briefed by Trump on the issue of Jerusalem. King Abdullah said in response that "Jerusalem is the key to achieving peace of stability in the region and in the entire world."The official Jordanian news agency, Petra, noted that King Abdullah warned Trump of the danger in such a step that he was out of reach for a comprehensive solution to the establishment of a Palestinian state and the capital of East Jerusalem. "Such a decision would be dangerous to the security and stability of the Middle East, and would lead to the collapse of American efforts for peace, and would also lead to strong reactions among Muslims and Christians," Abdullah said. According to the Jordanian news agency, the king discussed the issue with Palestinian Authority Chairman Mahmoud Abbas and stressed Jordan's full support for the Palestinians' protection of their rights in Jerusalem, including a united action against Trump's decision to undermine the hopes of the Palestinians for the establishment of a state and its capital in East Jerusalem.Morocco's King Mohammed VI sent a letter to President Trump, stressing that "Jerusalem must be a city of coexistence." "The transfer of the American embassy to Jerusalem will affect the fair settlement of the Palestinian-Israeli conflict," he said.