Israel has threatened to assassinate high-ranking Hamas members if the violence along the Gaza Strip border continues. 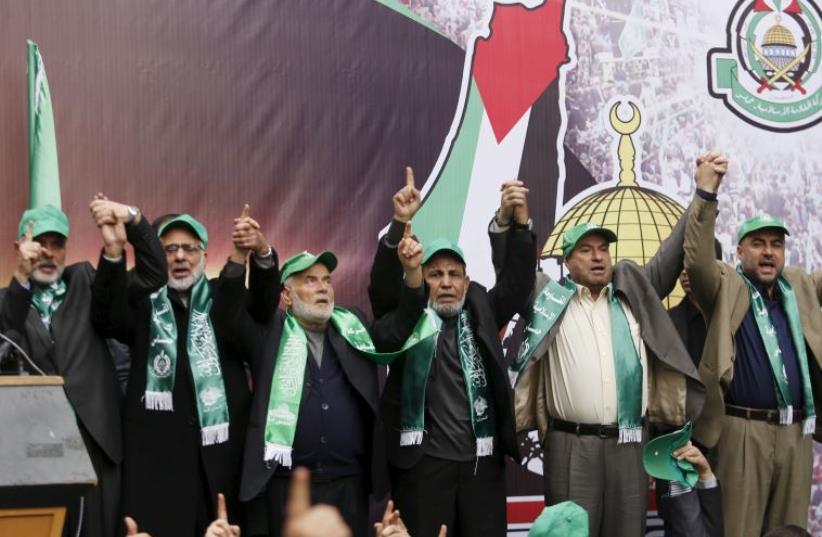 Hamas leaders (top) join hands as they take part in a rally marking the 28th anniversary of Hamas' founding
(photo credit: REUTERS)
Advertisement
The relative calm restored along the Gaza Strip border is being attributed to many factors, not least of which is that neither Israel nor Hamas currently are interested in the outbreak of full-blown war. In the interim, diplomats from the United Nations and Egypt are trying to devise a comprehensive long-term truce that would include a complete cessation of hostilities, the easing of restrictions and possibly the lifting of the blockade on Gaza and, eventually, a prisoner swap and the economic rehabilitation of the Palestinian enclave.What went largely unnoticed amid months of fighting was a renewed threat by Israel to resume the targeted killing of Hamas leaders, a controversial tactic employed in the past. Some analysts believe the threat caused considerable fear among Hamas’ top brass and thus contributed to a reduction in tensions, whereas others maintain that the practice not only damages Israel’s international standing but also contravenes international law. The issue gained widespread notoriety after the recent release of the book Rise and Kill First:The Secret History of Israel's Targeted Assassinations. In it, Ronen Bergman, a seasoned Israeli military and intelligence correspondent, estimated that Israel has undertaken more than 2,300 assassinations over the past 70 years.Maj. (res.) Elliot Chodoff, a political and military strategist specializing in the Middle East, stressed to The Media Line that targeted killings are, first and foremost, intended to prevent escalation in rapidly deteriorating situations. “Taking out the enemy’s key personnel has been a standard tactic since there has been warfare," he explained. "It is part of a package of carrots and sticks, and in this case I think opening the Kerem Shalom [border] crossing [through which products enter Gaza] is part of the positive flip side. It basically says to Hamas, ‘Behave yourselves and you’ll get the goodies; if you don’t behave we’re going to harm you.'"Chodoff noted that Israel has used the tactic even for what he described as "management" as "eliminating them directly impacts on an organization’s effectiveness, particularly skilled bomb-makers for example or experienced attack planners who are difficult to replace.” In this respect, he emphasized that Hamas does not have the same “personnel pool of a [traditional] army.”Dr. Gal Luft, co-director of the Institute for the Analysis of Global Security, a Washington-based think tank, contended to The Media Line that “we cannot really determine the full scope of the benefits or the drawbacks” of targeted killings because retaliation could come years later. “You win a war by assassinating your enemies," he elaborated, "but it will serve you in operational manners every now and then. Targeted killings are not a strategy in and of themselves but a tool that can be used during and to prevent a conflict.”For his part, Bergman argued in his book that tactical victories achieved by targeted killings have caused Israel to rely too heavily on the practice and not enough on statesmanship or political discourse. Others counter that targeted killings are necessary when it comes to terrorist organizations with whom engagement is impossible.As regards the legality of targeted killings, Professor Marco Sassoli, Director of the Geneva Academy, asserted to The Media Line that “the majority opinion among analysts today is that Hamas is a legitimate target [because they] have an armed contingent. But not every member can be targeted; only those with a continuous fighting function.”Sassoli concluded that international humanitarian law permits targeted killings in hostile arenas but bars indiscriminate attacks. “The law stipulates that such killings must be directed against legitimate targets in an armed conflict."