Out of the UN’s 193 member states, 147 voted in favor, seven voted against and eight abstained. 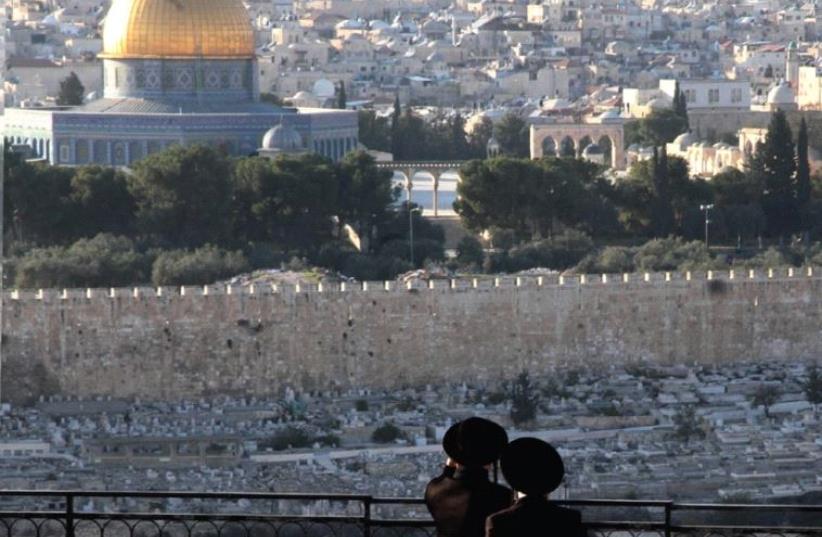 Looking out on the Temple Mount
(photo credit: MARC ISRAEL SELLEM)
Advertisement
The UN General Assembly overwhelming voted to support a resolution that used solely Muslim language to describe the Temple Mount.Out of the United Nation’s 193 member states, 147 voted in favor, seven voted against and eight abstained.The Jerusalem resolution was one of six resolutions condemning Israel and supporting the Palestinians that the General Assembly approved on Wednesday, as part of its special annual session for the International Day of Solidarity with the Palestinian People, which began on Tuesday.
Israeli Envoy to UNESCO throws UN Jerusalem Temple Mount resolution into the trash
All the European member states present in the room voted in favor of the resolution – countries such as France, Italy, Germany and the United Kingdom.The states that opposed the Jerusalem resolution were the United States, Canada, Israel, the Marshall Islands, Micronesia, Naura and Palu.Those that abstained were Australia, Guatemala, Panama, Papua New Guinea, Paraguay and Vanuatu.The Jerusalem resolution, numbered A/71/l.22, addresses the situation in Jerusalem and its holy sites and states that “any actions taken by Israel, the occupying power, to impose its laws, jurisdiction and administration on the Holy City of Jerusalem are illegal and therefore null and void and have no validity whatsoever, and calls upon Israel to immediately cease all such illegal and unilateral measures.”The text calls on Israel to have “respect for the historic status quo at the holy places of Jerusalem” and “urges all sides to work immediately and cooperatively to defuse tensions and halt all provocations, incitement and violence at the holy sites in the city.”The resolutions were introduced by a group of mostly Arab countries, including Algeria, Bahrain, Egypt, Iraq and Lebanon, and the Palestinian Authority, but also some Asian countries, such as Indonesia and Lao People’s Democratic Republic, as well as a few African countries.Resolutions A/71/l.18 and A/71/l.19, the first in the series, pledge respectively to support the UN’s Committee on the Exercise of the Inalienable Rights of the Palestinian People in its efforts to end the Israeli “occupation,” and extend member state’s cooperation with and support to the division for Palestinian Rights of the UN Secretariat.Draft resolution a/71/l.20, also adopted on Wednesday, with 153 votes in favor of it, seven abstentions and seven negative votes, aims to disseminate information on the Palestinian narrative of the Israeli-Palestinian conflict as well as on all the activities of the United Nations system relating to the question of Palestine. The resolution also states the need to organize and promote “fact-finding news missions for journalists to the Occupied Palestinian Territory, including East Jerusalem, and Israel.”In resolution A/71/l.21, the General Assembly calls for “a peaceful settlement of the question of Palestine.” It also “calls upon Israel, the occupying power, to comply strictly with its obligations under international law, including international humanitarian law, and to cease all of its measures that are contrary to international law and all unilateral actions in the Occupied Palestinian Territory, including East Jerusalem.”The last draft text adopted by the assembly, resolution A/71/l.8, adopted by a vote of 103 in favor, six abstentions and 56 votes against it, demands that Israel withdraw from all of the Golan to the line of June 4, 1967, and hand it over to Syria.Ambassador to the UN Danny Danon said, “Today’s resolutions are yet another example of the daily bias Israel faces in the UN.“At the same time that Israel is celebrating the historic decision to reestablish the Jewish state in our homeland, the UN continues to fund organizations and pass resolutions that do nothing to better the lives of the Palestinians.”The United States voted against all the resolutions. The representative of the US Mission at the General Assembly session spoke out against the “disproportionate number of resolutions condemning Israel.”He further stated that voting on these resolutions “damages the prospect for peace.”“All parties to the conflict have responsibility to end the conflict,” he said.The US representative added that his country is “disappointed” that the General Assembly chooses to single out Israel, which is “counterproductive.”The International Day of Solidarity with the Palestinian People is observed by the United Nations on November 29 each year, the date marking the anniversary of the General Assembly’s 1947 adoption of the United Nations Partition Plan for Palestine.