UNESCO rules Cave of the Patriarchs as Palestinian

UNESCO declares the Cave of the Patriarchs as Palestinian, angering Israel (Reuters)
Advertisement
For the first time ever, the 21-member World Heritage committee recognized on Friday a significant Jewish religious site — the Cave of the Patriarchs — as part of the State of Palestine.In a secret ballot vote, 12 countries approved this ruling on Hebron’s Old Town and the Cave. Three objected and six abstained.Prime Minister Benjamin Netanyahu slammed the vote as another “delirious” act by UNESCO.“This time, they determined that the Cave of the Patriarchs in Hebron is a Palestinian heritage site, meaning that it is not a Jewish site and that it is in danger."“Not a Jewish site?” he asked. “After all, who is buried there? Abraham, Isaac and Jacob, Sarah, Rebecca and Leah, our patriarchs and matriarchs,” Netanyahu said.“The site is in danger? Only in places where Israel exists, like in Hebron, is freedom of worship guaranteed for all,” he said.“Everywhere else in the Middle East, mosques, churches and synagogues are being destroyed,” Netanyahu said. “We’ll continue to safeguard the Cave of the Patriarchs, freedom of religion and truth." 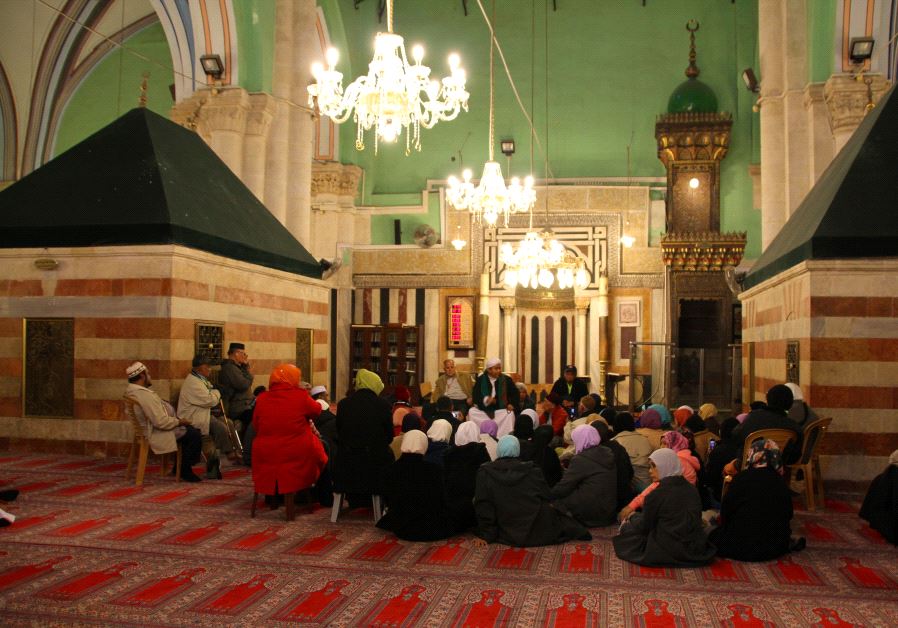 Muslim worshippers at the Ibrahimi mosque at the Cave of the Patriarchs, Hebron (Tovah Lazaroff)
In Krakow, Poland, where the vote took place, Israel's Ambassador to UNESCO, Carmel Shama HaCohen, had a theatrical response. He took out his cell phone and said, “Mr. Chairman. It’s my plumber in my apartment in Paris. There is a huge problem in my toilet and it is much more important than the decision you just adopted.”Foreign Ministry spokesman Emmanuel Nachshon tweeted, “The UNESCO decision on Hebron & Tomb of Patriarchs is a moral blot. Shame on UNESCO.”

The @UNESCO decision on Hebron & Tomb of Patriarchs is a moral blot. This irrelevant organization promotes FAKE HISTORY. Shame on @UNESCO

UNESCO seems intent on sprouting anti-Jewish lies, while it remains silent as the region's heritage is destroyed by brutal extremists.

Palestinian Ambassador Elias Sanbar thanked the nations who had supported his government’s third designation on the list of World Heritage in Danger, since it was recognized as member state of UNESCO in 2011.“Palestine has not inscribed a religion on the World Heritage List. Religion cannot be inscribed on such a list. It can only be something that can be felt, something we can fight for,” Sanbar said.“The Palestinian state is sovereign even though it is under occupation. It is acting within its full rights when it takes the initiative to nominate this city for inscription on the World Heritage List. This city which is on its territory. I think it should be absolutely obvious that the people who have something on their territory are able to inscribe that site. I do think the message is clear, but also a reminder is called for. My lands are the only lands in the whole world which are sacred to all three monotheistic religions,” Sanbar said.“We have a shared tradition of pluralism which extends back centuries and which calls for empathy and solidarity,” he said. “What has happened on that sacred land is something that is a legacy for all us, be we Jewish, Muslim or Christian or agnostic... The revelations that took place there on that land, the Palestinian land, is not limited to the mosque, the sacred sites on this land are sacred one and all.” But the bulk of the Palestinian Authority’s proposal to World Heritage Committee focused on the Hebron’s Islamic history in its Old Town, starting from the Mamluk period in 1250 and through the Ottoman Empire which collapsed during World War I. The Herodian era structure was built over a double cave, where the three Biblical patriarchs and matriarchs are said to have been buried. The cave is situated in a plot of land that was purchased by Abraham, according to the Bible.Located in the heart of Hebron’s Old Town, it houses both Jewish sanctuaries of worship and the Ibrahimi mosque. It is Judaism’s second holiest site and Islam’s fourth.The United States, Canada and Australia all spoke against UNESCO's ruling, even though they are not committee members.“The decision to inscribe Hebron/Al Khalil Old Town on an emergency basis is divisive, confusing and impossible to justify. The site is not under any real or immediate threat. The only urgency here is the urgency to express political anger," the US representative said. "Had the committee shown patience, this inscription might have represented , at some time in the future, an example of the World Heritage Committee as the international community’s best tool for cultural dialogue, mutual understanding and peace. Instead, the politically motivated decision today to inscribe only further stains UNESCO’s reputation and further divides this house."The resolution that was approved made no mention of the problems with the Palestinian Authority’s application that the International Council of Monuments and Sites (ICOMOS) detailed in its report.ICOMOS, the professional body that evaluates sites, took issue with the application, particularly with respect to the focus on the Muslim period of a city that has such strong roots in three monotheistic religions.An initial paragraph summarizing the committee’s reservations was rejected by the World Heritage Committee. A number of member states noted in the debate that the ICOMOS report marked the first time the organization had not clearly rejected a site that it failed to recommend.After more than an hour of technical debates, the World Heritage Committee adopted instead a new amended text by Lebanon, Kuwait and Tunisia.That text stated that the Palestinian Authority application did meet the criteria for both the World Heritage List and as an endangered site. The language made no specific reference to any religion or the cave, but other documents related to the inscription do take up both issues.Palestinian Authority Foreign Minister Riyad al-Maliki praised the outcome in a statement. "This vote is considered a success in the diplomatic battle Palestine is fighting on all fronts." "Despite the heated Israeli campaign, spreading of lies, the distortion and falsification of facts regarding Palestinian rights, the world approved our right to register Hebron and the Ibrahimi Mosque under Palestinian sovereignty and as World Heritage sites," said al-Maliki.Israel's Deputy Foreign Minister Tzipi Hotovely described the vote as a "badge of shame for UNESCO, which time after time prefers to stand with the side of lies."Defense Minister Avigdor Liberman reacted to the vote by describing UNESCO as a "politically-biased, embarrassing and antisemitic organization."Education Minister Naftali Bennett joined in the criticism of the vote. "It is disappointing and disgraceful that, time and again, UNESCO denies history and distorts reality, knowingly serving those attempting to erase the Jewish state," said Bennett. "Israel will not resume its cooperation with UNESCO so long as it remains a political tool, rather than professional organization." Yair Lapid, chairman of the Yesh Atid party, also responded, saying, “UNESCO’s decision to recognize the Cave of Patriarchs as a Palestinian heritage site is a despicable falsification of history. Does UNESCO not believe that the Bible is heritage? It’s a decision that, at best, stems from utter ignorance and, at worst, from hypocrisy and antisemitism.”Adam Rasgon contributed to this report.