The agreement, according to a Vatican statement, “deals with essential aspects of the life and activity of the Catholic Church in Palestine.” 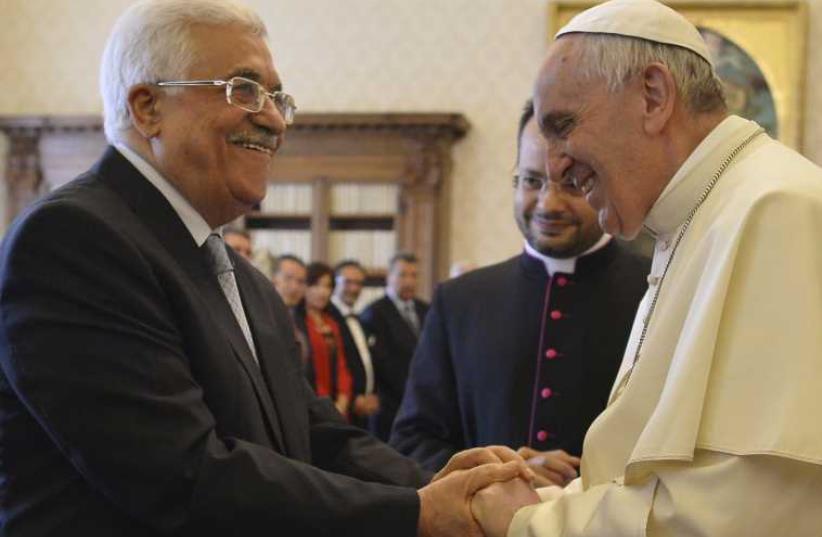 Pope Francis (R) shakes hands with Palestinian Authority chief Mahmoud Abbas in the Vatican
(photo credit: REUTERS)
Advertisement
The Vatican signed its first treaty with the "State of Palestine" on Friday, calling for "courageous decisions" to end the Israeli-Palestinian conflict with a two-state solution. Israel expressed disappointment last month at the Vatican’s announcement that it reached the outline of an agreement with the Palestinians and at the Holy See’s use of the term “State of Palestine” for the first time in an official document.The agreement, according to a Vatican statement, “deals with essential aspects of the life and activity of the Catholic Church in Palestine.”Both parties, according to the statement, “agreed that the work of the Commission on the text of the Agreement has been concluded, and that the agreement will be submitted to the respective authorities for approval ahead of setting a date in the near future for the signing.”Israel expressed “regret” at the Vatican's decision to recognize the Palestinian Authority as a state and the signing of the accord, hinting it could have implications for future cooperation between Israel and the Vatican.“This hasty step damages the prospects for advancing a peace agreement, and harms the international effort to convince the PA to return to direct negotiations with Israel,” the Foreign Ministry said in a statement.The statement said that Israel also regrets “the one sided texts in the agreement which ignore the historic rights of the Jewish people in the Land of Israel and the places holy to Judaism in Jerusalem.”Israel, the statement read, “cannot accept the unilateral determinations in the agreement which do not take into account Israel's essential interests and the special historic status of the Jewish people in Jerusalem.”Deputy Foreign Minister Tzipi Hotovely said that the Palestinians are continuing to act unilaterally, and as such are pushing away any chance for direct dialogue.“It is unfortunate that the Vatican decide to give a hand to this time of action and to blatantly ignore the history of the Jewish people in Israel and Jerusalem,” she said. “All attempts by the Palestinians and other factors to undermine our historic rights to Jerusalem and Israel will be met with fierce opposition from us.” Israel and the Vatican have themselves been unable, after some 16 years of glacial negotiations, to sign an agreement that would deal with matters such as the status of the Catholic Church in Israel, the issue of sovereignty over some 21 sites in the country, and taxation and expropriation issues.