The meeting, held under the informal UN mechanism known as the Arria-Formula, was called for last month by Venezuela, Egypt, Malaysia, and Senegal, who all co-chaired it. 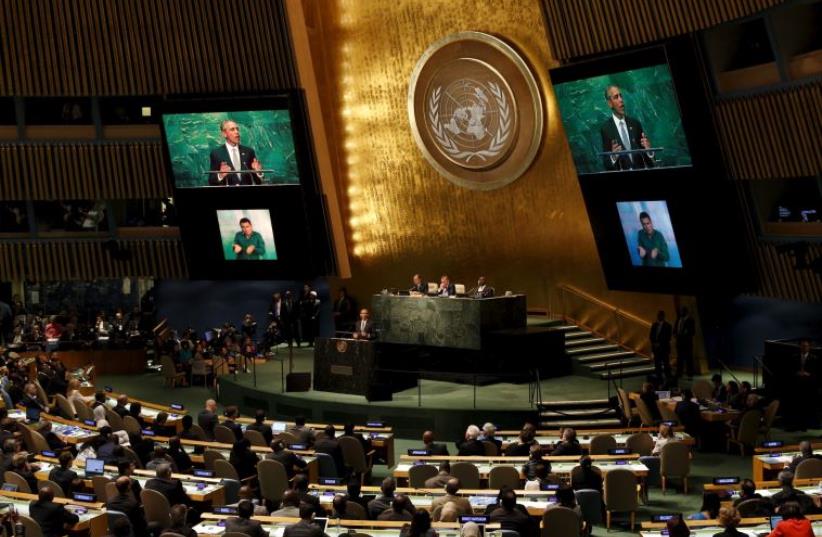 United Nations General Assembly Sept 27
(photo credit: REUTERS)
Advertisement
NEW YORK - Venezuela’s UN Ambassador Rafael Ramírez asked  if Israel sought a "final solution" against the Palestinian people during a speech at an informal meeting of the United Nations Security Council Friday afternoon.Ramirez said that members of the UN Security Council should ask themselves: “What does Israel plan to do with the Palestinians? Will they be disappeared? Does Israel seek probably to wage a final solution sort of solution as was perpetrated against the Jews?”The meeting, held under the informal UN mechanism known as the Arria-Formula, was called for last month by Venezuela, Egypt, Malaysia, and Senegal, who all co-chaired it. Ambassador Ramirez condemned Israel for its “unlawful settlements” and the “ongoing violence” against Palestinian civilians and said that the failure of the Security Council to come up with a solution to these problems is a “clear fiasco” and is due to the constant veto of the United States. “We don’t have to wait for the right time,” he said. “I think the right time is now because 50 years have gone by already.” “We cannot continue to let the People of Palestine suffer at the hands of an occupied power who continues to settle in their territory, demolish their homes, grab their lands, imprison their children and murder their women and children,” the Venezuelan ambassador added.  Ramirez also urged Security Council members to “come up with a resolution on the illegal Israeli settlements.” Not doing so, he said, would be “a crime against the people of Palestine.”“It would be an excellent signal to be sent by the SC to say that we are taking action on this issue.” The Palestinian representatives at Friday's meeting did not speak.Over the past weeks, Palestinian officials have been leading efforts to pass a Security Council resolution against Israeli settlement activity.  The resolution has not yet been formally presented to the Council. In preparation for Friday’s informal meeting, a document presented to the council stated : “For nearly 50 years, since Israel occupied the West Bank, including east Jerusalem, and the Gaza Strip in 1967, the Palestinian civilian population has endured systematic human rights violations, and even war crimes, by the occupying power.”It further states that “the international community, foremost the Security Council, continues to fail to hold Israel accountable and to compel a halt to its violations and compliance with its legal obligations.”While Israel typically attends meetings when permissible but opted not to go to this one. It has, however, urged sympathetic member states to send lower level representatives or to push the discussion toward one about the Middle East in general. Both the United States as well as The United Kingdom sent senior political advisers to the meeting. The UK representative at the meeting, Stephen Hickey responded to the Venezuelan ambassador’s comments and said: “Whatever one’s views on the Israeli-Palestinian conflict, using language like ‘the final solution’ to describe Israeli policy is, in the United Kingdom’s view, both tactless and offensive.”The United States’ political advisor also came to Israel’s defense and pointed out that the meeting was “unfortunately” one-sided. “We reject completely any comparison between the actions of Israel and those of Nazi Germany, which we find deeply offensive,” he said. “Israel has the right to defend itself in the face of terrorism.” Several experts including legal scholars and  human rights advocate testified about the dangers facing the Palestinian population. Among them as also Michael Sfard from the Israeli NGO  Yesh Din, which works for “structural, long-term improvement to human rights in the Occupied Palestinian Territory” and seeks to end Israeli occupation.“I’m an Israeli national, I was born in Israel, I went to law school in Israel and I raise my children in Israel.” Sfard, who was applauded at the end of his speech, said. “It's not easy for me to list before you my country’s violations of International law but i am concerned.” After the meeting, Sfard condemned the Venezuelan Ambassador's comments. The ambassador then said he "deeply apologizes" if he offended Sfard or the people of Israel.Israel’s Ambassador to the UN Danny Danon also strongly condemned the Venezuelan ambassador’s remarks and said the statement is “clear anti-Semitism against the Jewish state”.“His remarks are a direct continuations to the Palestinian representative’s statement a few days ago comparing Israel to the Nazis,” Danon said.  “The Palestinians are bringing anti-Semitism into the halls of the UN and are legitimizing racists and crass language in the parliament of nations.”Last week, Palestinian representative to the UN Riyad Mansour compared Israeli actions to the suppression of the Warsaw uprising by the Nazis in World War Two.Ambassador Danon and the Israeli Mission said they immediately worked with members of the Security Council and UN officials to ensure that the Venezuelan remarks would be quickly condemned.Ahead of the meeting on Thursday, Ambassador Danon said:  “In a week when terrorists are continuing to stab Israelis, and yet another attack tunnel was discovered on our southern border, the very request for a meeting on ‘protection’ for the Palestinian people mocks the founding principles upon which the United Nations was founded. We call on the members of the Security Council not to give legitimacy to yet another useless initiative by the Palestinians who continue to spread baseless lies about Israel.”

Herb Kenion and Tovah Lazaroff contributed to this article.
Advertisement
Subscribe for our daily newsletter